Why you need to combine analogue thinking with digital sophistication 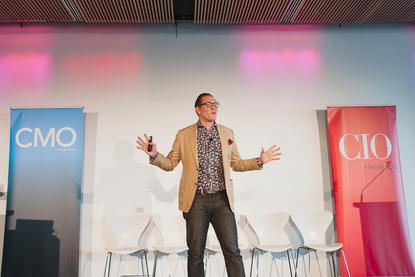 Customer-led transformation isn’t about ditching the physical in favour of digital, but instead using both to connect with the analogue hearts and digital minds of your customers.

That’s the view of digital futurist and innovation strategist, Anders Sorman-Nilsson, who spoke at the recent CMO-CIO-ADMA Executive Connections event in Sydney about the need for more seamless customer experiences in a world where every industry and brand is being digitally hacked.

Sorman-Nilsson is the founder of strategy thinktank, Thinque, working with clients such as Apple, Johnson & Johnson, Cisco and IBM on digital disruption and its implications on business models and leadership. He has penned several books on the subject, including Dialogue: How to win the digital hearts and analogue minds of tomorrow’s customer, as well as Seamless: A Hero’s Journey of Digital Disruption, Adaptation and Human Transformation.

“Many futurists are swiping left on human intelligence and wiping right on AI. But I’m also a bit of a traditionalist. The digital world, potentially from a CX perspective, if just made pure-play digital, could also be digitally de-humanising,” he told attendees. “There is a role for traditional and technology in the future and as we design our transformation around the customer.

“The key to winning the hearts and minds of tomorrow’s customers is the seamless combination of the digital and the analogue… Both worlds – traditional customer wisdom and technology – can be mutually reinforcing.”

Sorman-Nilsson noted analogue and digital worlds connect to different parts of us. “One of these worlds is about winning trusted loyalty through emotional connection, and the other is connecting in real time with the rational minds of your customers,” he said.

“The great thing we now have both worlds to offset the weaknesses and amplify the strengths of both as well.”

There’s no doubt every business model is getting digitally hacked, literally or metaphorically. To cope, Sorman-Nilsson advised thinking of your organisation as a technology company with a licence in your area of speciality.

“Everything physical, courtesy of Internet of Things [IoT], is becoming part of a cyber, seamlessly connected part of the Internet,” he continued. “The mindset for all of us, as we think about the future and customer of tomorrow, is to start thinking as technology companies with a licence in X or Y industry you’ve traditionally been in.”

Bringing back humanity through digital change

At the same time, IoT is bringing with it the ability to augment humanity through digital connectivity, Sorman-Nilsson continued.

“I think we can code for humanity, empathy and for better human outcomes,” he said. As an illustration of how this could be done, Sorman-Nilsson pointed to autonomous vehicles, which are expected to save up to 1.1 million lives per year.

Digital connectivity is also helping people act in more empathetic ways while removing friction points, Sorman-Nilsson said. In Sweden for instance, microvendors on the streets selling the country’s version of The Big Issue to help the homeless, teamed up with a mobile POS provider that takes NFC and biometric payments as well as credit cards. The partnership saw sales rise 59 per cent within a few months.

“When it comes to connecting with the positive intent of your customers and future customers of doing business with you, are you consciously or unconsciously putting up friction between the positive intent, and the digital, seamless executive of that intent?” Sorman-Nilsson asked the audience. “Anyone in B2B for example, have to do lots of paperwork with clients and force them through a long procurement process? Could that be made easier courtesy of digital?”

As physical infrastructure becomes part of a connect ecosystem, a new ‘trialogue’ is emerging, Sorman-Nilsson explained.

“It used to be that brands could just communicate unilaterally one-way with clients. It was a broadcast model,” he said. “We then moved into a dialogue through social media, where we had two-way conversations; think of reviews and your clients hijacking your brand. Then the object started speaking to us, engaging us in a trialogue between brand, consumer/customer and object.”

With computing power and machines expected to surpass the brain power of a human by 2045 thanks to artificial intelligence advancement, we’re just at the knee of the exponential curve of things moving very quickly, Sorman-Nilsson added.

“What you should be thinking about is if you solve your customer’s issues predictively and preventative, maybe that’s more humane than anything we could deliver through a human,” he argued. “If the customer journey is designed in an empathetic fashion, isn’t that more empathetic and more humane, than anything a smiling person overseas can deliver in your contact centre?”

An example of this in practice from Sorman-Nilsson is from Lemonade, an insuretech company that came up with the idea of a consumer speaking their insurance claim through to their mobile device. Using biometric authentication on an individual’s face and running 21 algorithms for fraud protection, the company can assess and process a claim to payment in 3 seconds.

“It’s not just B2C – what we are seeing is consumerisation of the B2B customer journeys,” he said. “Great B2C brands have set the high expectations of today’s B2B procurement professional. They expect greater content, thought-leading articles, a context that’s relevant and real-time for them.”

Making it a personal transformation

What we’re also heading into is what Sorman-Nilsson described as a ‘transformation economy’, where digitally-enabling brands can positively impact consumer behaviours. He pointed to Nike’s investments into apps such as its Marathon Training Plan and Nike+ Run Club, both of which build stronger customer loyalty while also nudging consumers into more transformative, individualised experiences.

“Start thinking about how you can get 2X the result with half the effort – either though new technology or human creativity,” he advised. “What analogue processes don’t offer you any data-based insights and need upgrading immediately? What’s one thing you can do tomorrow to come even closer to your customers through a digital dialogue? What is the analogue baby you shouldn’t throw out with the bathwater, but can be enhanced through digital technologies?”