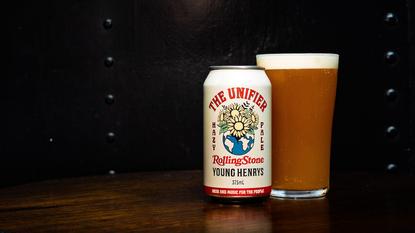 Rolling Stone magazine and Volley have both struck partnerships with beer brands as part of category and consumer extension strategies.

Iconic music publication, Rolling Stone, has a new collab with boutique brewer, Young Henrys, with the Sydney-based brewery announcing the launch of The Unifier beer. The limited-edition beer is inspired by music’s power to bring people together throughout the ages and marks Rolling Stone’s first co-branded collaboration with an Australian craft beer.

“Rolling Stone has played a pivotal role in celebrating music’s culture-defining moments for over 50 years,” said Rolling Stone president and COO, Gus Wenner. “We’ve joined forces with Young Henrys to create a beer that not only honours our heritage but also reminds today’s generation that history is still in the making,” he added.

The Unifier is a hazy and hoppy pale ale made from rolled oats, with stone fruit aroma and flavour, and will be made available on tap and in tinnies nationwide. As part of the partnership, Rolling Stone has brought on Rolling Stone Australia, published by The Brag Media, to promote the product in the local market.

“Great collaborations happen when people of similar values meet,” said Young Henrys co-founder, Oscar McMahon. “It's no secret that the Young Henrys family is made up of dyed-in-the-wool music lovers who embrace all that music is, was and represents within society and culture. So, we made a beer with Rolling Stone that honours that sentiment,” he said.

The partnership includes a collaboration with Rolling Stone and Young Henrys brand ambassadors, including sportsman and disability advocate, Dylan Alcott, as well as Amy Shark, Murray Cook and Patience Hodgeson. These brand ambassadors will be calling awareness to The Unifier’s mission, with a percentage of proceeds going towards organisations making a difference in Australia today, including Dylan Alcott Foundation, Support Act and Autism Camp Australia.

“Like Volley, Coopers has a long and proud history making quality products for Australians,” Coopers marketing and innovation director, Cam Pearce, said. “Our brands are among the best known and loved in this country, so it made sense for us to join forces to create the ultimate Aussie footwear.’”

The Volley is a tennis shoe that started life in 1939 and Coopers is a sixth-generation family owned business which has been producing beer since 1862. The XPA sneakers aren’t available to purchase and must be claimed by customers after they have bought a case of Coopers XPA.

Volley Australia marketing manager, Sam Despotidis, said both brands’ similar heritages made the partnership an obvious choice. “When we put the call out to our fans on what collaborations they’d like to see, they asked for Coopers. Our customers value quality and having fun with their mates, which aligns with Coopers XPA drinkers and what they value.” said Despotidis.