Why CMOs must embrace software and agility or risk a 'customerpocalypse'

Author of book on customer engagement in the new digital realm and CEO of Pegasystems, Alan Trefler, on what it takes to be successful 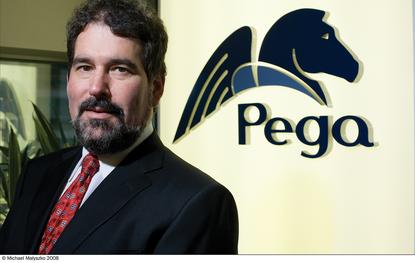 CMOs need to stop running away to cloud-based apps as a way of solving customer engagement, and start doing the hard work of bringing agility and continuous digital innovation into their business to drive more relevant experiences.

He caught up with CMO to discuss his views on the changing nature of customer service, and why marketing leaders must deepen their involvement in both technology and cultural change if they wish to help their company avoid the ‘customerpocalypse’ facing modern organisations.

Trefler uses the term ‘customerpocalypse’ as a reflection of the power customers now have over brands in the digital age. In his book, he claims many companies will die over the next few years as a result of ‘customer stress’:

“Death may come as the result of self-inflicted wounds the company should have known to avoid, which means it is kind of suicide. It may come from involuntary manslaughter by a new generation of customers. Or these new kinds of customers may just outright murder companies they decide should be put out of their misery. It is the customerpocalypse.”

In his interview with CMO, Trefler claimed consumers are now powerful enough to “devour companies with love” or “demonise them, and actively kill those companies”.

“CMOs need to be sensitive to the ramifications of not listening to the customers fully,” he said.

The problem is that the entire software process “seems designed to ensure customer dissatisfaction”, he claimed.

“A lot of marketers are hampered frankly by the lack of connectivity in the data they have about the customer; the insights they can get by analysing and making judgements on big data; and the ability to execute and operationalise these insights,” Trefler said. “This is because the systems are just so horrible.

“If the CMOs want to change to be more ‘customer centric’, they end up in a long queue waiting for siloed systems to be changed and revised. It’s time to change. We need to understand we’re in a world of more threatening but also rewarding customer relationships. We have to fundamentally change the way we go about these relationships and that requires a new approach to technology.”

While agreeing organisations must embrace a holistic culture of listening and responding to customers, success and differentiation is increasingly about integrated and sophisticated technology utilisation, Trefler claimed. A key reason is that customers increasingly expect access to support and services on a self-service basis, occurring where and when they want it to.

“Also, it has to be end-to-end and a seamless experience between the call centre and the website, that helps the sales rep then guide customers,” Trefler said. “That requires new thinking about technology in favour of empowering the marketers.”

Fostering ties with the CIO

In recent years, cloud-based applications have been a way for marketers to gain the technological capabilities needed to take a more automated and also personalised approach to their customers. But Trefler claimed these have in fact exacerbated the problems CMOs now face – not least because they create data and capability silos.

“SaaS apps have in some ways been an easier battle to fight, or run away from,” he said. “But that won’t work for strategic applications, such as the core of customer service; these can’t succeed in silos, they have to work across the value chain from point of inception to execution. Those systems involved in selling, onboarding and servicing clients are too critical to just confirm to what an off-the-shelf SaaS app will give you.

“In the words of Marc Andreessen, we need to accept that software is eating the world and is how businesses differentiate. For strategic applications, you need to have an approach to bring the CMO and CIO together so there’s a level of agility and involvement not found on a SaaS shelf.”

Trefler advised marketing leaders to make sure they are a key part in how technology decisions unfold in the business. Yes, that means building better a better relationship with the CIO.

“You can’t just abdicate that to the technology groups, or run away and buy SaaS systems, you need to insinuate yourself into that process,” he said.

“CMOs have to help fix the relationship between marketing and IT to foster agility in the core of businesses. This is especially true for larger, more complicated multi-channel businesses, where they also have to make sure they don’t create something in one channel that isn’t coherently continued in another.”

One area where Trefler has seen this occurring is in organisations trying to build a ‘mobile-first experience’.

“If you have more than just a mobile offering and operate in other channels, a mobile-first approach is going to ensure you have an inconsistent experience,” he said. “You need to take both an ‘outside in’ approach – how do I design for the customer – and an ‘inside out’ approach – how do I ensure I have end-to-end processes that work across channels to ensure you’ll be successful in this new world.”

Related: Forrester: Mobile is about contextual customer moments, not consistency

The other key to success is recognising agility is vital in matching the rapidly changing expectations of what Trefler labelled “Generation D”.

“The new Generation D is quick to demonise, and there is an expectation of high responsiveness. To be successful, marketers need to ensure they are delivering connectivity with customers, simplifying experiences end-to-end, and adapting a culture that embraces change and seeks agility,” he continued.

“Digital is about continuously innovating and that is increasingly separating the winners from the losers.”

While there has been a lot of talk about marketers obtaining a 360- degree view of their customer, Trefler also suggested this isn’t adequate for building an effective customer engagement strategy.

“The 360-degree view grossly misses the target and is just about the data, or who those customers are,” he claimed. “In addition, you need a second 360-degree view of why the customer comes to you and what can you do for them. And you need a third 360-degree of where, how and when those interactions occur.

“This means a 1080-degree, or high definition customer service.

“In the human metaphor, data is just memory. Judgment is the brain power, and muscle is process. You need all three of those to be successful. Marketers can’t just get be content with just getting involved with data and insights – they have to be able to drive how it’s operationalised and how execution happens.”

The role of the CMO is to ensure every customer engagement – sales or service – is tied into fulfilment and end-to-end, and how all the channels of interaction work in a “coherent fashion”, Trefler said.

“The key is to stop running away to SaaS apps and start doing the hard work of getting faster time to market in their business and more active and accurate engagement,” he added.

Related: How to win your marketing team over to the data side

Of course, leading with data-driven insights isn’t about losing creativity. According to Trefler, creativity is lost when people believe they can form conclusions on their customers’ behaviour simply by looking at data.

One of the current problems with data-driven approaches is that executives are using data in the absence of applying the ‘scientific method’ to devise causality around correlations in data, he claimed.

“People have fallen into the lazy trap of assuming patterns they see in the data are somehow causal,” he said.

“The way you should use data is to look for correlations, and having found some interesting things, define what experiments and test those correlations to see if they are in some way causing each another.

“In coming up with these hypotheses and tests, there is a tremendous opportunity to be creative. The folks that are more successful are making sure they don’t just find correlations but also causation.”

Trefler pointed to a 0.99 correlation between the per capita consumption of margarine and divorce rates in Maine in the US.

“That might suggest the way to sell more margarine is to find a way to increase divorces. But in reality, it’s unlikely there’s causality there,” he said.

Trefler cited GE’s ‘champion challenger’ testing program as an example of how an organisation is tapping into data in a clever and creative way. The program takes a common idea, then applies a challenging idea to a subset of the population, changing the way the offer is presented. A/B testing is then employed to show changes caused by communication.

“This allows you to test that there is a result from making a certain change, while also maintaining a stable group that shows the change that has been caused by what you implemented,” Trefler said.