10 lessons in making a rebrand a whole of organisation job 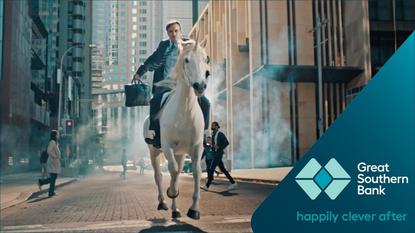 As Great Southern Bank’s chief customer officer, Megan Keleher, put it to CMO, the task of transitioning the banking provider to a fresh brand and purpose was the biggest change the organisation has faced in its 70-plus year history. Which made it vital every person across the organisation was onside.

“Brand is everybody’s accountability: This was a whole of organisation change we were undertaking,” she said. “It’s something I am most proud of. If I look back, there were times I wondered if everyone would get onboard as I ran 12 streams of work across marketing, operations, risk, technology and finance. I couldn’t be happier with how it has ended up. I made sure this was not a marketing thing, but a total company change.”

Potentially repositioning the CUA business was on the agenda right from the first day Keleher and CEO, Paul Lewis, joined two years ago. But two things needed to happen to be operationally stable enough to transform. One was embedding the new CEO's approach. Another was devising a business strategy and remit the organisation could align behind.

“We kicked off with a broad remit: We have an ambition for growth, however we know that brand is an enabler of growth. We have had the same brand for 20 years and it has never reached double-digit unprompted awareness,” Keleher explained.

“Delving into the research further, we started to realise how significant the requirement for revisiting the brand strategy was going to be. We didn’t originally have the name change on the agenda.”

A massive brand overhaul got underway. Here, Keleher details the steps she took to implement the brand change and the lessons that have stood out along the way.

1. Know who you are and why you exist

“We focused on who we are, where do we play, how do we win, and who are our competitors - we were butting right up against the business strategy of those challengers unapologetically,” Keleher said. “As we went through these discussions, which started internally first with executives and then relied heavily on external market data and research, it became clear there was a need for a brand strategy overhaul.”

To help, the team brought in strategic consultancy, Growth Mantra, to do a complete review.

Great Southern Bank is the culmination of 171 credit unions dating back to Catholic Thrift and Loan Co-op in 1946. Boasting of 600,000 customers, it was clear a strength was a solid customer base. Yet for Keleher, it was equally apparent the business was unclear why they banked with the institution.

2. Find your footing to compete

The other aspect of finding a point of difference was understanding how Great Southern Bank continued to compete in a changing banking and financial services sector.

“When we looked in the mirror, we knew we were not going to compete on scale, nor compete on ‘customer’ – that ability to have deep pockets around technology or operating models delivering a unique customer experience,” Keleher said. “But we have always been a purpose-led entity as a credit union.”

The hurdle was the existing purpose didn’t capture what the organisation was delivering for customers. This meant relooking at what that purpose was to not only shore up existing customer relationships, but also generate a pipeline of new ones to drive growth.

Work resulted in the clear brand purpose to ‘help all Australians own their own home’ and a new set of propositions to achieve these ends.

3. Get the brand name right

Also clear was that the brand name and identity needed to change. Research showed 70 per cent of millennials didn’t know what a credit union is or what it did.

“We had to make the decision of whether to try and educate the Australian population on that versus not,” Keleher said. “We knew a lot of entities had tried to do that before. So we needed to face into the fact the name probably wasn’t going to take us where we needed to go.”

The launch internally of the new Great Southern Bank branding and purpose occurred on 1 June 2021. At this time, 23 operating systems cut over to Greater Southern Bank, as well as raft of assets from online banking to desktop images and staff car parking signage.

Well before this, Keleher’s team had instigated business readiness workshops to ensure employees had experience in both the reasons for the brand and purpose, as well as how to take the new set of propositions to market. As part of the business strategy and realignment, the company also sold off its health business.

“Change management has been a huge part of this project. We were clear we wanted to communicate and have everyone including customers, partners and stakeholders understand what the purpose was and why it’s so important,” Keleher said.

All this while coping with Covid restrictions. “We were running this largely over Zoom – the entire agency pitch was over Zoom. But it meant you had to very clear on communication, conscious about the type of feedback you were giving, and clear about how you were going to move something forward,” Keleher commented.

Read more: What CMOs need to do to cope with marketing change management

When it came to selecting the new brand identity, Keleher made sure the process was a team sport. Teams and members were involved through multiple research panels, alongside new and engaged customers, partners and stakeholders.

Work started with 320 names initially. From there, a shortlist of 21 was devised, which went through another research round.

“We got to our top five versus bottom five, keeping CUA in there the whole time,” Keleher continued. “We wanted to be able to save that we have a name that may perform better than our existing name. It was the right decision – we debated that at length.

“We then took three names with two logo treatments and our visual identity to existing customers as well as new ones. Great Southern Bank was number one all the way through. On the raw numbers it wasn’t what we thought would come through, but clearly across all results it was number one.”

Up next: Five more crucial lessons in brand repositioning

6. Farewell your old brand with aplomb

As part of the brand switchover, formal ceremonies were instigated to send off the CUA brand in style, including a collection of old assets. More than 5000 assets were identified as part of an audit requiring transition to the new branding.

“Some team members have been here 35 years and have seen seven different names in that time. We used Facebook Workplace to share those experiences and stories,” Keleher said.

“We wanted as much data to possible to take the emotion out of the decisions. But it was also OK to celebrate the past of CUA. We had Throwbank Thursdays where some staff showed old pics from the 1960s.”

At the same time, creating an emotional connection to the new brand was vital. “Even when we launched to team members first, then customers and broker partnerships, we wanted to ensure team members could speak with confidence, talk about why we retained the colour teal, how the logo was developed. I feel every team member could do that,” Keleher said.

Another successful project around showing up differently was a fashion show of newly branded staff uniforms that also highlighted the fresh brand personality. Staff were invited to submit a video showing both. From there, a panel selected several frontline team members who created a video of the new uniforms while showcasing the fresh personality of Great Southern Bank. Keleher said the content was incredibly well received.

Branded assets were triaged and prioritised as part of the planning, with customer-facing experiences and platforms prioritised first. On 1 June, all customer services platforms including mobile and online banking, plus credit cards and consumer lending, transitioned on the new date.

In addition, the Melbourne call centre, office in Sydney and office in Brisbane were swapped over overnight, meaning staff came in the next day to new lanyards, badges, desktop images, car parking space signage and Covid signs.

“People wanted to get involved and we had a group of people in the business who wanted to be part of the change – they were like an army and took that on themselves,” Keleher said.

Great Southern Bank’s flagship Melbourne branch is opening shortly with the new look. “But we also made sure we had signage and posters with new branding in branches for several weeks,” Keleher said.

“We didn’t want customers to walk past and wonder where CUA went. For one month prior, had communications saying we are changing then we have changed from 1 June.”

In mid-June, Great Southern Bank launched a new marketing campaign, ‘Happily Clever After’, consisting of TV, out-of-home, digital, PR and social. The creative aims to showcase the new ways the bank can help Australians on their home ownership journey.

Richard Rose was brought on to undertake the brand creative strategy, Carat is in charge of media strategy and Keep Left the PR and social strategy.

All the way through, Keleher has been conscious of being thorough and thoughtful. That required research and being data driven.

“I had a board to take on a journey and needed it to be an evidence-based decision tied tightly together with our business strategy,” she said. “That was rigorous and rightly so. It’s the biggest change in the organisation’s history. The fact that the approach we took was very deliberate, and also engaging expert third parties was important as well.”

10. Identify measures of success and timelines

This also means being thorough about measures of success. At a top-line level, Great Southern Bank wants to double its market share in the next three years.

One measure Keleher will use to gauge success is the engagement survey. “One of the weaker results, even though we perform strongly from engagement perspective was alignment to purpose. I’m hoping to see a big shift there,” she said.

“Our NPS is strong and maintaining that through a major change like this with current customers was something we also set targets and roles around. Then there are lead indicators such as traffic to websites and appropriate brand tracking through Kantar.”

Keleher has also worked to be clear with the board on what to expect and timeframes to understand whether the Great Southern Bank rebrand been successful. A big one here is building prompted brand awareness of 45.

“At the end of the day it’s about the discipline and execution name for me and my team, which is staying true to a strong brand proposition,” she added.