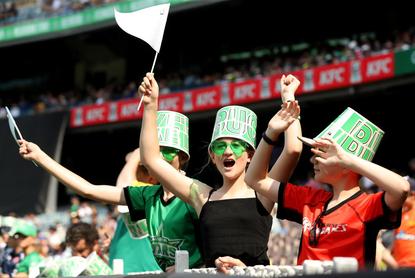 Sports sponsorship is one of the most impactful ways of tapping into both the emotional and functional aspects of brand, says KFC Australia’s chief marketing officer, Kristi Woolrych.

It’s been 17 years since the KFC brand established a relationship with Cricket Australia, and 10 years since it became naming rights sponsor for the newly formed Big Bash League (BBL) in 2011. From the 20/21 season, the partnership enters a new phase, with KFC becoming naming rights partner of the rebel Women’s Big Bash League as well as committing to activities around the Women’s National Team.

Reflecting on the partnership so far, Woolrych told CMO this week both the brand and the game have come a long way since those early days.

“When we first started on this Cricket Australia partnership, nothing much else was happening over the Australian summer but cricket. This provided a brand reach program for us to hold space over the summer months,” she said. “When Cricket Australia became interested in building out the shorter-game plan, we jumped on the opportunity to come on-board and help create that.

“This was a unique opportunity to create the KFC 20/20 Big Bash – a new form for cricket, which was a better brand fit for us. It was fast and exciting. We used our brand love to help build the same popularity for the Big Bash League over the last 10 years.”

In terms of milestone activities, Woolrych noted the Bucketheads as one of the first successful fan activation initiatives launched by KFC around the Big Bash League.

“The first few years of getting buckets on heads wasn’t easy, and we were handing out buckets in stadiums. Now it’s an integral part of being a fan at the KFC BBL,” she said. “You don a bucket to show your support and it’s a signature piece of being part of the game.”

The way KFC has partnered with the men’s team over time has also evolved. A good example is extending to include the KFC Youth Foundation, which funds work around improving mental health, skills development and addressing depression in younger communities. In a campaign run last year, this saw cricketers dressed in branded buckets and featured in creative and content linked to the message of ‘backing yourself’.

“Partnering with men’s team to talk about that was a special thing to do,” Woolrych said. “The third thing was spreading our presence across the country with the KFC food truck at iconic locations like the Sydney Cricket Ground. That’s a highlight and shows how far our partnership has come.”

All this meant it was a no-brainer to jump in and sponsor the Women’s game from the 20/21 season, Woolrych said. From the 2020-21 season, KFC will be involved at rebel WBBL|06 and Australian Women’s National Team matches.

“This was the first time we’ve been able to extend our partnership to support the women’s game. We have wanted to do this for a long time, so to have this built into our agreement is a very important milestone,” Woolrych said.

The starting point will be learnings with what KFC has done with the BBL. While the relationship is a bit different in terms of what the brand has access to, Woolrych said planning is expected to include activations.

“In a similar way to the way KFC has built the popularity of the BBL, that’s what we want to bring to the women’s BBL,” she said.

In terms of measuring brand metrics, Woolrych said KFC looks to a balance of short and long-term outcomes, ultimately driven by building reach and having impact.

“KFC is the number one brand associated with cricket in Australia. What we have seen is stronger brand metrics among the cricket fans in the community, which we have built on. Cricket is such an entrenched part of summer and our culture. We want to drive relevance of the brand in Australian culture and this partnership has been pivotal to achieving that,” she said.

According to Woolrych, sports sponsorship is so unique because it taps into both emotional and functional brand objectives. “It’s a platform that brings people in with passion,” she continued.

“There are very few sponsorships in Australia like the KFC and cricket partnership. Every year, we build on that 17-year partnership. At KFC, we have a culture of continuous improvement, and the principle of learning from what we have done in the last four weeks to inform the next 12 months. Because of that culture, this partnership is constantly evolving and we’re constantly looking at what did and didn’t work. In that way, this gets bigger and better.

“We also drive cricket through-the-line during summer, and it’s reflected in everything from retail assets to brand marketing activations in general, and via broadcast.”

With planning for upcoming season underway, Woolrych said the team recognised the ongoing COVID-19 crisis could throw more curve balls into the path of sport and Australian consumer culture.

“What we do know is we have to be adaptable in order to adapt to what’s going on,” she said. In addition, tapping into increase swathes of data, from KFC owned assets like its app, through to activations on digital platforms and via Cricket Australia’s database, will inform the process. KFC also plans to bring its SuperCoach fantasy competition, which this year was running around the AFL and NRL, to the BBL for first time.

As for ongoing measures of success, Woolrych again noted the broad reach KFC is tapping into through the ongoing popularity and strength of the BBL.

“It comes back to the role sports play in Australian culture and the broad reach platform it represents: There are very few partnerships that give you that access to reach in a way that’s so highly emotive,” she added.

In a statement announcing the latest sponsorship extension, CA head of Big Bash Leagues, Alistair Dobson, highlighted the strong connection between KFC and the BBL.

“The partnership between KFC and the BBL has been built on shared objectives of bringing fun to families across Australia, and together we’ve formed a winning combination over the past decade,” he said.

“Whether it be collecting a colourful Buckethead or attempting to catch a Bucketball free hit in the crowd, the fan-first initiatives developed alongside KFC form a crucial part of the BBL’s identity.”