In This Together: National Reconciliation Week’s theme of togetherness

This year’s theme taps into the current pandemic crisis as well as highlighting the ongoing project of national reconciliation. 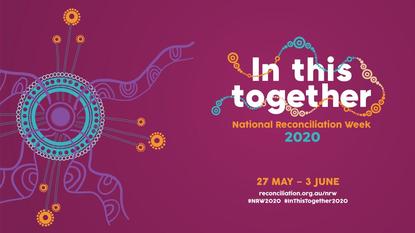 National Reconciliation Week 2020 kicks off this week with the theme ‘In This Together’, highlighting whether in a crisis or in reconciliation it’s about coming together to support each other in a shared experience.

To mark the event virtually this year, Reconciliation Australia has launched a campaign encouraging all Australians to take to social media with an acknowledgement of Country at 12pm Wednesday 27 May.

“We can’t be physically together to show respect, but we can show respect to Country where we are. Take the time to acknowledge the Traditional Owners of the Land that you are on, wherever you are,” the group said.

Reconciliation Australia said people can consult the map of Indigenous Australia on its site for a guide to the Traditional Owners of the Land they are on and tag them and include the hashtags, #InThisTogether2020 and #NRW2020. The artwork for this year’s event was created by Biripi/Bunjalung artist, Nikita Ridgeway, and symbolises all of us on a journey towards reconciliation.

This year is significant because it marks 20 years since the Walk of Reconciliation when some 250,000 Australians walked across the Sydney Harbour Bridge to show their support for reconciliation. Again, Reconciliation Australia is encouraging people to share their photos and memories virtual through social media with the hashtags #InThisTogether2020 and #NRW2020.

Mundine said the bridge walks marked a shift in the national consciousness and, twenty years on, the majority of Australians were still in it together in support of reconciliation.

“As this year’s National Reconciliation Week theme says, we are In this together. That theme is resonating now in ways we could not have foreseen when it was developed last year, but it reminds us whether in a crisis or in reconciliation, we are all in this together,” she said.

It comes as a new campaign ‘From the Heart’ was launched with the goal of sharing with Australians why an Indigenous Voice to Parliament enshrined in the constitution is fair and practical. It will run through online channels including the campaign website, Facebook and Instagram, with the aim of building awareness of the Voice to Parliament. It comes at the three-year anniversary of the Uluru Statement from the Heart, which was delivered by Aboriginal and Torres Strait Islander people from all over the country and from all walks of life.

Director, From the Heart campaign, Dean Parkin, said the COVID-19 pandemic shows Australia is at its best when we work together. “Aboriginal and Torres Strait Islander communities are some of our nation’s most vulnerable, and as Australia seeks to recover from this crisis, a constitutionally-enshrined Voice to Parliament should form part of the national effort to get us back on our feet,” he said.

The week-long celebration of Australia’s Indigenous history and culture is also an annual reminder about the ongoing project of national reconciliation. Reconciliation Week runs from 27 May to 3 June each year, dates which commemorate two significant milestones in the reconciliation journey - the first, the successful 1967 referendum on including Indigenous people in the census, and the second marks the High Court Mabo decision that recognised native title. The week also includes a range of other online events such as virtual debates, concerts and film screenings.

"Reconciliation happens every week of the year and we’re committed to celebrating the successes of Aboriginal and Torres Strait Islander peoples, to shine a light on the injustices and to lead and shape the debate around reconciliation,” she said.

The National Indigenous TV (NITV) channel on SBS is also marking the event with dedicated programs all week. NITV channel manager, Tanya Orman, told CMO it has curated its programming to the theme of ‘In This Together’ with the use of content that connects all Australians to country and a celebration of the environment and land we all love.

“NITV plays an important role in providing Indigenous-authored content that tells the story for all audiences to engage with and help understand the history of this country, the different perspectives and visions for the future of Australia,” she said.

The special programming kicks off with Indigenous current affairs programs, Living Black, talking to Senator Patrick Dodson, the ‘Father of Reconciliation', and The Point, which is exploring how COVID-19 has brought a new dimension to Reconciliation Week. It also includes a program of films, documentaries and other shows celebrating Indigenous filmmakers, important figures such as Mabo and Indigenous history and culture on both TV and its streaming platform, SBS On Demand.

Orman explained there will be a dedicated social media plan across NITV and SBS platforms, and NITV will run promotion campaigns across the network to highlight the range of Reconciliation Week content, which include cross-promotion opportunities on SBS during The Beach simulcast on Friday 29 May, INACA spots pointing to special Reconciliation Week and Mabo Day content.

“NITV has a highly engaged social audience and presence which we will use to connect our viewers including asking those who walked over the Sydney Harbour Bridge in 2000 to reflect,” she said.