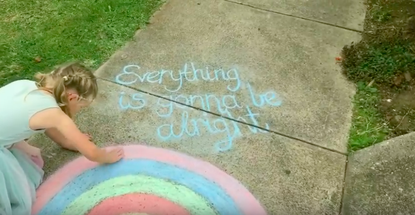 HBF, WA’s largest not-for-profit health fund, has launched a new campaign with the theme ‘Everything’s gonna be alright’ in the midst of the COVID-19 epidemic.

The fund said it wanted to raise the spirits of the local community and honour those at home as well as the health community during this time. HBF head of marketing, Louise Ardagh, explained to CMO how the COVID-19 events meant a rapid change of direction for a planned campaign, which the fund quickly realised was an opportunity to issue a rallying call for members and the wider community.

HBF, which as been around for almost 80 years, worked with its agency, Cummins&Partners, to create what it said is an important, heart warming campaign. The message encourages staying well and is also a reminder that in hard times, there are examples everyday of people doing incredible things – from heroic acts to simply raising a smile in the most unexpected of circumstances.

“We wanted to remind West Australians and our members we’re here for them, and we know they have the strength and resilience to get through this. These good news stories, as well as our inspiration, became the backbone of the campaign,” Ardagh said.

Operationally, like almost all businesses and workplaces, much of the focus for HBF was on the practical matters at hand - shifting to remote work and collaboration, and getting through the next few months. But a proposal from the agency offered a way to re-shape the planned campaign around the community and share an important message from the long-standing funding.

“We’re a member fund, so we put members first, but we also believe we have a responsibility to show leadership and reflect that back with compassion and humanity,” she said. “I think there’s a duty of care as a fund and we reflect that as a brand.”

Asked if this episode, which has altered everyone’s way of life and shaken the economic and health foundations of communities, could change marketing and branding, Ardagh said, first and foremost, “the long-term ability to build trust in a brand is still foundational”.

“Being able to be clear, consistent and able to communicate is what a brand should be doing in times like this,” she said.

When it comes to the marketing strategy for the fund, in this crisis and beyond, Ardagh knows keeping those principles at the fore will hold it in good stead when making decisions about what to say and when to say it.

“When it does matter, at times like this, the timing and style of messages really does matter,” she said.

Ardagh said that at time like this, while people are connected in their isolation, they seek out facts and true information more than ever. And brands more than ever have a role to play in addressing those needs.

“The more a brand communicates with honesty, the greater the cut-through will be,” she added.