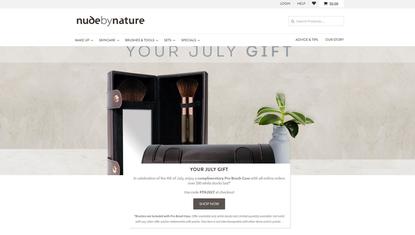 A data-driven experiment by Australian cosmetics producer, Nude by Nature, to test the effectiveness of retargeted display advertising has seen the group achieve sales uplift of 11.8 per cent.

Nude by Nature head of digital, Gavin Merriman told CMO his objective in running the test was to respond to industry suggestions that retargeted and programmatic display are ineffective and work out whether there are in fact viable advertising options for the beauty brand.

He noted a recent comment made by the chief data officer of Trump’s election campaign, Matt Oczkowski, suggesting programmatic advertising is a dying industry.

“The idea that buying a 300 x 250 display ad is effective is false, you’re more likely to get bitten by a shark than click on one of those ad units,” Oczkowski said at the recent ADMA Data Day event in Sydney.

At the same time, Merriman highlighted statistics from the Interactive Advertising Bureau (IAB), that report 69 per cent of marketers plan to increase their retargeting budget, with 93 per cent believing it performs the same or better than other forms of display.

According to Merriman, even the most sophisticated attribution modelling doesn’t comprehensively reflect the impact retargeting has in the path to purchase. It just tells you how it works in comparison to other things in the mix.

“Many of those sales may have occurred without the retargeting, plus most are viewed as clickthroughs that convert via direct and brand, so it’s impossible to tell its real ROI,” he claimed.

“Traditionally, you’ve not been able to tell if it has any impact on sales uplift, as you haven’t been able to A/B test those exposed to retargeted display versus those that haven’t. Platform capabilities haven’t enabled that before. And I’ve certainly not seen anything published that conclusively shows running retargeting delivers the uplift that covers the costs of doing it in the first place.”

The only way to tell if retargeting really delivers an ROI is to run a proper A/B test to examine the uplift from the treated group against the control group, Merriman said.

So that is what Nude by Nature set out to do, capitalising on its bespoke marketing cloud, built off the back of Tealium’s Universal Data Hub. This platform allows the brand to unify data and power cross-channel personalisation.

In its first retargeted advertising test, the brand fire remarketing tags using Tealium’s IQ product to 75 per cent of its exposed audience, with the remaining 25 per cent left untreated as a control group. Nude by Nature passed those people to Tealium Universal Data Hub, with those segments then made available to Optimizely, which in turn ran an A/B test when those people come back to the website.

“This means the generated gross profit breaks even against campaign costs, but then there’s increased positive brand recognition, customer acquisition and an offline halo off that too, which are all upsides,” he said. “Some of those new people are also likely to become repeat purchases, making them higher lifetime value customers, so it’s more than covered its costs.

“I was unsure of what we’d see to be honest, so it’s good we saw that uplift.”

However, Merriman noted the uplift was 14.1 per cent but dropped to 7.7 per cent during a sale period. As a result, the brand plans to include the sale messaging within the retargeted display creative next time, alongside dynamic products auto applying the sale coupon.

The initial tests were done using RadiumOne’s off-the-shelf product. Merriman expected results would improve further once it was using its own Sizmek platform to bid on advertising opportunities, which was more cost-effective.

“From here, it’s more about how we refine and improve it further, which is what we’re doing by leveraging our lifecycle customer data more effectively to test what does and doesn’t work. We need to improve our creative as well,” he said.

The results will not only justify retargeting spend, they’ll help show areas where Nude by Nature shouldn’t focus as heavily and understand the broader role of each channel in customer engagement.

Merriman also noted the strategy for some channels in terms of personalisation needs to be different to others.

“With Facebook, for example, we can do things like win-back and replenishment campaigns, and they work more there because it’s native advertising. It knows who you are,” he commented.

“If you’re just looking around the ABC news website and you see something clearly personalised to you, it feels more ‘Big Brother’. I don’t think you can be quite as personalised in that space.”

Another area of focus is Nude by Nature’s customer loyalty program. Merriman said it’s now working to expose individual points tallies to consumers in its email communications and when they’re logged into the website.

“You could in theory push that into retargeted display,” he said. “But it’s about how we message that appropriately. You don’t want to be too much of a stalker. You can be more personalised in an email. Whereas through display, you’d want to make it feel more like a special offer, and more generic.

“It’s testing that to try and find the right balance, as well as which products we should be showing.”