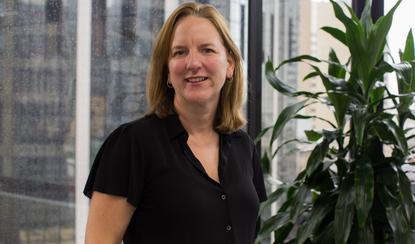 Rebranding six distinct brands globally into one streamlined entity isn’t a task for the fainthearted. But add in Brexit, a rapidly evolving fintech market, the need to shift from acquisition to more lifecycle-led marketing, and the adoption of programmatic advertising, and you’d be right in thinking OFX marketing chief, Rebecca Shears, has her work cut out for her.

Shears was appointed CMO of ASX-listed foreign currency provider, OFX (formerly OzForex) in December, but has been with OFX since August in an interim capacity. A former Telstra marketer, UK-born Shears came back to Sydney for the second time in 2016 after several years in London working for T-Mobile’s consumer marketing division, as well as HP’s PC and printing business.

She joined OFX in August to roll out the new OFX branding to all of the group’s geographies. First debuting in Australia in December 2015, the company launched a multimillion dollar, three-month cross-channel campaign from May last year to introduce the new brand name and positioning to the local market.

Since then, OFX has been rolled out to the US and UK markets, and Canada, Hong Kong and New Zealand are next.

“Given the nature of the business is serving global consumers and businesses, it made sense to have the one brand,” Shears tells CMO. “Previously, we had country-centric names, such as OzForex and UKForex, and it didn’t make sense.”

While there was strong brand awareness, particularly in Australia, associated with those identities, the benefits of a unified brand outweighed them, Shears says.

“We have strong ambitions for international growth, particularly in the US, and we needed a strong global brand image,” she says. “Our industry is becoming more competitive, and it was important to have one brand in many markets. Customers move around too, so it makes sense to be identifiable no matter where they are.

“There are also efficiencies with one brand – for example, we now have one website as opposed to seven to talk to our customers. Also via PR and social, we had found different names being picked up all the time and you miss out on aggregating coverage globally.”

Starting with the customer

A big part of the branding process has been understanding customer insights. “OFX is focused on telling the story around us offering better value, faster transfers and better technology to our customers,” Shears explains. “We are part of the fintech revolution, and we’re using technology to offer a better experience, but we’re also about great service and expertise. That’s our heritage and we wanted to keep that.

“Our NPS scores, and feedback tell us customers value the experience of talking to our service consultants with real knowledge around foreign currency and transfers. We also have specific tools for business customers to manage risk better, do forward planning and lock in rates. We wanted to capture all of that in the rebrand.”

At the same time, there is a consistency in customer needs around getting better value, conversion and speed.

“The only slight difference is around trust and security in the US – fraud issues are greater in the US for example,” Shears says. “So we’ll dial up that messaging more there. We have strong relationships with the banks and the slowest fraud rate in the industry, so we talk about those more in the US.”

Hurdles in the road

But it hasn’t been an easy road, and as the rebrand continues, OFX has experienced significant financial challenges. The listed company has reported a couple of disappointing quarters, impacted by lower commission incomes after the Brexit referendum and a decline in British transactions.

It’s also been hit by delays in wider technology platform upgrades, as well as the rollout of the new branding globally.

Kimber had promised to double revenue to $200 million, a long-term target that remains in place for the organisation under its new CEO.

“It has taken us longer than originally planned. The growth we were predicting in the US and other markets is happening, but it’s taking longer, and we have to rebrand every site, which is taking time. It’s quite nerve wracking when you go through a rebrand and you have to wait to get that brand consideration and recognition back up. We’re going through that and starting to see improvements in Australia.

“We’ve also learnt from migration in Australia, and we’ve managed US and UK in a more seamless way. Our SEO and registration growth continues to be strong in these markets.”

With any strategy, consistency is the key to ensuring results, Shears says. “The challenge with being a listed company is you set ambitious targets and you have to meet them. It’s a tough environment but we’re still getting significant growth,” she says.

Being consistent doesn’t mean there isn’t an appetite for new marketing methods to achieve brand success. In September, OFX started utilising programmatic advertising, striking a partnership with med agency, Havas, to help. There are also plans to adopt programmatic in the US in marketing campaigns from April.

“We have a defined target customer base of expats, property investors and businesses trading overseas, so mass market was always going to be less appropriate for us,” Shears explains, adding search marketing remains another critical part of the mix. “We’re finding programmatic is working well. We’re following digital advertising approach but we use all the same media assets – video, display, native mix are all in the mix.”

The marketing team took a lot of time before rolling out programmatic to understand its customers and what is driving them.

“All good brand marketing as understanding value proposition and needs of the audience. Media choice then comes second,” Shears comments. “Programmatic doesn’t change what’s at the heart of a campaign, which is providing the right information to the right customers in a way they want to consume it.”

In May, OFX will also kick-off an out-of-home campaign in San Francisco to take over the downtown area. “California is our biggest state in the US. We’ll see how that goes, then we may roll out that approach to other cities later this year,” Shears says.

Following her appointment in August, Shears has made it a priority to ensure the marketing team is aligned to overall business objectives. Through this process, she identified two areas that needed stronger capability.

The first was customer lifecycle marketing, and to do that, OFX has invested in Salesforce CRM and Marketing Cloud as well as new staff resources.

“We do have a lot of communications and talk to our customers more to them than some organisations. We have a daily and weekly commentary that goes out, for example, leveraging our in-house expertise. What we are looking to do is better automate that.

“We’re looking to build our database capability, real-time data and customer journeys. Our sales team is using Salesforce as well, so we have end-to-end process, and that helps bring sales and marketing much closer together.”

The shift also has an impact on core metrics for the marketing function. “In the past, core focus was on new registrations and customers. Now, we’re talking about a more lifecycle approach, how we track revenue per customer and retention rather than just how many customers,” Shears says.

“There is more emphasis on content, social media, and using PR to get the expertise message out there. Combined with our priority focus on CRM and customer experience, hopefully this means customers will spend more and recommend us to others.”

The other area of the business that required more attention was B2B, Shears says. “The marketing team had been very focused on our consumer audience. Yet we have seen lots of growth in SMB with online sellers, and we have a partnership with Amazon and a product in that space,” she says.

Winning over the executive team

What Shears finds refreshing about OFX is that the executive team has already bought into the value of marketing.

“They see our importance, particularly as a digital company, but with recent change and focus of existing customers they’ve welcomed it and there has been no difficulty in communicating that is what we should be doing,” she says.

“With a service organisation, and in a digital space where everything is direct, marketing is the main channel to drive acquisition or increases in revenue. We’re integral to business growth. That brings with it pressure and accountability, but I welcome that.”