Making digital a new way of innovating at Australia Post 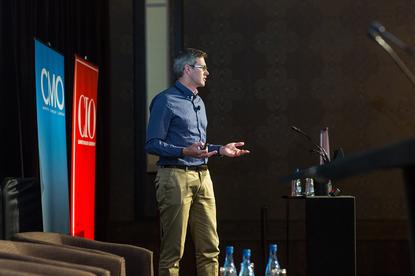 Digital transformation for Australia Post is less about the next set of products and services coming through, and more about creating an organisation that can adapt and create new business models quickly.

Speaking at the Melbourne leg of the CMO, CIO and ADMA Executive Connections event last week, Australia Post’s general manager, Digital Delivery Centre, Cameron Gough, talked through the cultural, operational and environmental elements that have had to change within the organisation in order for it to cope with digital disruption and be able to innovate.

Gough has been at the helm of Australia Post’s Digital Delivery Centre for the past three-and-a-half years, growing the division from a team of 12 to more than 350, including 250 engineers and 100 customer experience and user experience professionals.

Gough outlined three key domains Australia Post has overhauled in order to embrace digital as a new way of working and interacting with customers. The first was investing in automating processes and activities, he said.

“What we found at the start was that it was taking us 50 days to follow all the processes and steps to get a change out in front of customers,” he told attendees. “One of the major hurdles was the time it took to get into test environments. We invested heavily in the last couple of years in automation and we’re now able to get an amount of code all through those steps in about eight minutes and out into production. So we went from 250 deployments in our first year, to 250,000 in the last year.

“What it does is allow you to start experimenting and prototyping in a way we could never do before. Our bravery to just get something out is going up, because the cost of getting something wrong is very low, as is the cost of fixing it. So the way you work is the first thing.”

The second area of focus for Australia Post has been the environment in which teams operate.

As an example, he noted governance models around product development.

“If the governance bodies are asking questions such as: What am I going to get, how much is it going to cost, how long is it going to take, and how soon can we get the benefits, very little goodness is going to come out of that and you’re almost guaranteed not to surprise them on the upside and probably disappoint on the downside,” Gough claimed.

“What we say is that we don’t exactly know what we’re going to do, but we know there is an opportunity to do something,” Gough explained. “It might be in the mobile space or identity, for instance. What we’ll say is we want to dedicate a certain percentage of capacity to this problem. The questions the governance community then ask is what do we expect to learn, when will we know what we’re learning, and when will they hear back. It’s a very supportive model.

“We still have traditional projects, but we have far more of our work being done this way and 95 per cent of my team are working under this capacity funded model.”

Detaching this strict connection between the funding source and what it’s for, and what you actually deliver, is really important, Gough said.

“For example, we wanted to shift the needle on people receiving parcels when they’re not at home. It’s a simple, high-level target that you then give to the team, along with funding, to get going. They then feel less constrained and feel more able to experiment and innovate.”

The third component to fostering digital and customer-led innovation at Australia Post is culture, Gough said.

“We have invested heavily in training our people and bringing in leaders that are innovative thinkers, are very inquisitive, to create and support this learning culture we need for this environment,” he said. “Once we have built this way of working, we are in a much better place to support innovation.”

Today, Australia Post’s list of activities to foster innovation is extensive. One ongoing initiative is regular hackathons, and the organisation has held 12 to date.

In addition, Australia Post has launched an ‘intrepreneurs’ program to help ensure ideas and creativity within the organisation has an avenue for discovery and advancement. Run every three months, the program sees teams present their ideas to executives for consideration. The best are given up to $100,000 and six weeks to invest and build.

Australia Post’s Apple Watch app, which launched at the same time as the smartwatch last April, came out of this initiative.

“Because that team were capacity funded, they didn’t look around for support for the business case, they just decided as a team to build it,” Gough said. “Over six weeks, we had a pretty great app that was launched the day the Apple Watch came out. You can track parcels but also unlock parcel lockers if you have a QR code and a parcel coming in. That cost about $50,000 to develop that, and I don’t think we would have come close to a business case in the past for that.”

Another recent program of work to drive innovation is around co-creation with external partners and customers, Gough said,

“We realise some of the best ideas are not going to come from a single company,” he said. “We’re joining forces with other organisations to see what new things we can create.”

An example of a solution now being rolled out is for changing address online. Gough noted about 3 million people change address every year, a painful and laborious process. Australia Post has worked with a Queensland organisation to allow customers to come to one online portal, enter in where they’re coming from and moving to, choose from a list of organisations that have signed up to the service that need to be notified, and have their address changed in one fell swoop.

“This has been greatly received and it’s being rolled out now,” Gough added.