The new app prototype is created by digital agency, Deepend, during a three-day onsite innovation exercise and is based on live customer feedback 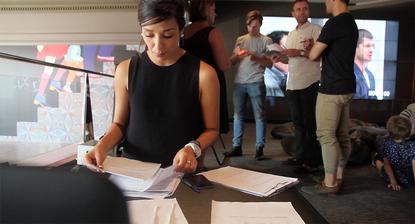 Onsite at the three-day innovation challenge

The live innovation project ran across Village’s Jam Factory cinema in Melbourne in January and saw six of Deepend’s consumer technology specialists engage with local cinema patrons in order to create, test and prototype a customer-centric app or program.

Deepend managing partner, Kath Blackham, told CMO her team used live customer feedback to develop the prototype, which allows patrons to pre-order from the candy bar and collect purchases without queueing. During development, the team discussed requirements with people entering the cinema and in several cases, had a product to show them when they came out of the film.

“We actually had no idea what we would be building when we started this project,” Blackham said. “The challenge was always to turn up and just build what Village Cinema customers wanted.”

On the first day, Deepend collected qualitative feedback via one-on-one surveys, and from these, started to see patterns emerge. In total, the team spoke to about 80 patrons.

“People there were frequently using their mobile device as part of their overall cinema experience, they were open to purchasing candy bar items through an app and everybody was unsurprisingly keen to skip the queues,” Blackham continued. “Based on that feedback, we decided to create a prototype that would streamline the candy bar experience.”

Deepend produced five iterations of the app during the three-day exercise. Blackham said the first step was talking about the candy bar idea and seeing if it resonated with people.

“The second iteration saw us drawing up rough wireframes, which helped us nail down what sort of structure people would be interested in,” she explained. “Then it was all about going through a design/build/test process for the next three iterations until we had something everyone was happy with.

“Everything was done onsite so we could ask customers what they wanted as they were going into the cinema and then have something to show them when they came out two hours later.”

It’s now up to Village Cinemas to decide whether to put the app into commercial use, but Blackham hoped the cinema operator would given its potential and the great feedback received from patrons.

In a former interview with CMO, Village general manager of sales and marketing, Mohit Bhargava, said the activity was just one step in the group’s efforts to transition from a bricks-and-mortar business to an omni-channel retailer. In particular, the organisation was keen to find new ways of incorporating mobile into its wider customer experience offering.

The work with Village Cinemas was the first time the agency had done such an innovation exercise, and Blackham said there were plenty of insights gleaned from the experience.

“We were surprised how easy it was to get a prototype together in two days,” she said. “We got to appreciate how incredibly useful it is to step away from our office to spend personal time with our client’s actual customers. It may sound obvious, but this can be so easy to overlook.

“We are thrilled at how much our relationship with Village Cinemas has deepened as a result of working collaboratively with them on this project and our team thoroughly enjoyed the unique challenge.”

“This approach makes particular sense for brands that have a concentration of customers in one place,” she said. “It is an incredibly powerful thing to design and build among the actual end users we want to help.”