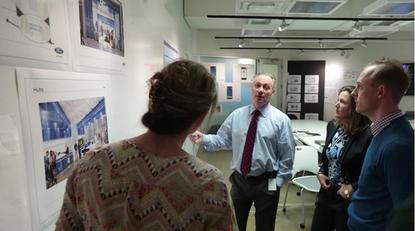 View inside Ford's command centre at Ford World headquarters in Dearborn, US

Ford Motor Company has revealed details of the 18-month, customer-centric innovation process that is seeing the group transform into an auto and mobility company and triggered the launch of its ambitious new FordPass offering.

The company is positioning FordPass as a reimagining of the relationship between automaker and consumer that could be as revolutionary iTunes was to the music world 12 years ago.

There are four components to FordPass: Marketplace, for mobility services; FordHubs, where consumers can experience the company’s latest innovations as well as build customised vehicles; Appreciation, or a membership loyalty offering; and FordGuides, or virtual personal assistance to help consumers move around more efficiently.

To support these efforts, Ford has struck several third-party agreements, including a partnership with ParkWhiz on advance parking insights, and a deal with FlightCare to help consumers share and borrow vehicles. Both of these services can be paid for via Ford’s virtual wallet, FordPay. The company has also inked arrangements with McDonald’s and 7-Eleven around merchandise and unique experiences for members.

FordPass is due to launch in April and all consumers can sign up to membership for free. The offering is part of Ford Smart Mobility, an overarching strategy aimed at lifting Ford’s connectivity, mobility, autonomous vehicles, customer experience, and data and analytics game.

“We did it when we put the world on wheels a century ago and we do it now through our strong line-up of cars, SUVs, trucks and electrified vehicles,” he claimed. “Today, we take our commitment one step further with the introduction of FordPass – an all-new platform that may be our most revolutionary yet.

“As we’ve studied the mobility challenges people face, we designed FordPass to help provide services that make consumers’ lives easier. FordPass is really about listening to people’s needs and developing ways to help them move better.”

Getting to FordPass: Ford’s innovation approach

It’s the story behind the launch of FordPass, however, that will best help other organisations looking to innovate their product and services offering in the name of the customer.

According to Ford, team members charged with improving the automaker’s relationship with customers spent 18 months in a command centre, covering the walls and ceiling with sketches, post-it notes and printouts that benchmarked the customer experiences of other leading firms including Amazon and Ripcurl.

In April 2015, a team of employees spent three days working with leading global mobile, design and customer experience experts on how to tackle the task of making consumers’lives easier during the 900 or more hours they spend in a vehicle each year. It was the 72-hour marathon effort that resulted in the idea for FordPass, one of 10 names initially conceived for the mobility offering.

This very lofty ambition was not what Ford started out with. The original mission had been to improve the relationship between consumer and dealer, and was debated during an initial four-and-a-half-hour annual interaction.

“It [the command centre] was really competitive, with people moving between rooms trying to determine what owners, ride-sharers and general commuters would want out of a world-class customer experience,” said company vice-president of global dealer and consumer experience, Elena Ford.

The company said the team started with the premise of ‘the big idea’, and evolved things initially by brainstorming around a day in the life of an ideal member. This was refined over the next several months to mirror the wants and needs of a consumer.

To do this, staff looked at the many scenarios where consumers could have daily interactions with FordPass. On the list were at the start of the morning in the car, using FordPay to locate and pay for parking at a downtown destination, redeeming perks with an affinity partner, instantly paying for services via the Ford Credit bill, chatting with a FordGuide about where to find a FordHub to learn more about a new technology, and using the FordPass app to call roadside assistance to fix a flat tyre or battery.

“That’s how we decided we could elevate and participate in the full customer experience.”

Getting to FordPass in 18 months, “a record amount of time” according to Ford, was not easy.

As an example, comparisons and ideas around other customer service experiences worth emulating had to be addressed by making some do-it-yourself renovations to the command centre. In addition, an 80-inch TV screen used to visualise how FordPass would work turned out not to be big enough.

At another point, large pieces of cardboard were drilled into the walls to provide more space for sketches, post-its and printouts. When that wasn’t enough, the team attached more cardboard to the ceiling to hang 11x17-inch slides and mockups.

As FordPass edges towards debut in April, the company added the command centre continues to change and grow to support it.

Read more about how other organisations are looking to innovate: