Disney Accelerator graduate Imperson launched an AI-powered platform that enables virtual characters to engage with their fans and consumers. 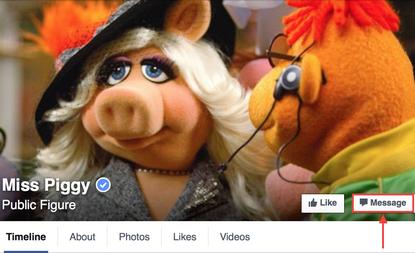 Consumers can now talk to their favourite Muppet character on Facebook messenger, thanks to a chat bot that simulates virtual conversation between characters and their fans.

Disney Accelerator graduate, Imperson, has launched an artificial intelligence-powered platform that enables brands and studios to create conversational, virtual avatars of their popular icons as a way to engage fans and consumers.

Through the current campaign, millions of fans have the chance to chat live with Miss Piggy one-on-one via Facebook Messenger via the automated chat bot.

From December 2015, Miss Piggy’s Facebook page featured a ‘Message’ button, allowing anyone to message her in real time on Facebook Messenger and start their own unique conversation with the late night talk show host.

With the initiative in its early stages, co-founder and CTO of Imperson, Eyal Pfeifel, said it’s too early to determine its effectiveness yet.

“This is a long-term strategy building on the move towards messaging as a significant communication medium, allowing brands and commercial entities to communicate with users directly,” he told CMO. “It will take time to build the awareness, tools and reach for this to be measured.”

Imperson is an Israeli startup founded last year by Yaki Dunietz, Eyal Pfeifel, Seth Greenfield and Erez Baum, and develops virtual avatars of celebrities using artificial intelligence. It was one of 10 new businesses chosen for Disney’s class of 2015.

While it is not clear on the Facebook site that Miss Piggy’s virtual character is an automated bot, Pfeifel said the main goal is simply to provide an entertaining and authentic experience.

“Since Miss Piggy, like other TV or movie characters, is a character following a script, extending this into conversation is completely natural,” he claimed. “From our experience, users rarely question the authenticity of the conversation, for one simple reason: They need to believe.

“It’s just like watching a scary movie, and feeling scared, even though it’s only a movie. It’s part of the experience. At Imperson, we focus on bringing characters to life over messaging, mostly for promotion and storytelling purposes.”

Pfeifel is certain other companies will see the huge potential of integrating with messaging platforms. He believes users now expect brands and famous figures to be available also through messaging, and that this new medium is going to be a part of any significant social media presence.

Even startups will eventually need to automate their conversations in order to maintain efficiency and scale, he said.

“For brands on the rise who are starting their conversation organically, when the customer base grows, or spreads internationally, maintaining good response times for a 24x7 operation would become a challenge,” he added. “This kind of scale can only be achieved through automation (or very large support centres).”

Meanwhile, the Muppets characters are excited to be able to connect to their fans through social conversation.

“I see this as a gift to all those who love me, who admire me…and who have always dreamed the impossible dream of chatting with me,” said the Miss Piggy virtual character. “Here’s your chance. Come and get it!”