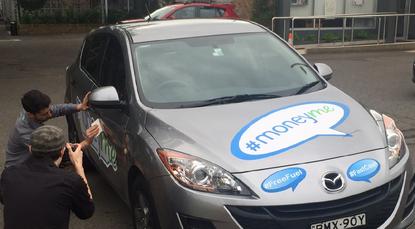 Digital finance firm, MoneyMe, has kicked off a new social sharing project to drive customer engagement by getting customers to wrap their cars with the firm's branding and hashtags to receive free fuel for the summer.

The ‘For Millennials, By Millennials’ campaign was created by MoneyMe’s largely millennial staff, who wanted to engage their customers in a social sharing project that positioned them as MoneyMe brand ambassadors, while giving them a gift that would put money back in their pockets over the holidays.

According to MoneyMe brand, marketing and communications manager, Claire Morgan, millennials increasingly want a two-way relationship with brands and want brands they identify with socially.

“Instead of increasing our advertising spend on traditional channels as most companies do over this period, we wanted to harness the idea of social sharing,” she said. “We believe customer engagement should be less about advertising at and marketing to customers, and more about giving them something of value they actually want to talk about, and share with their friends.”

The campaign encourages drivers to promote their personalised hashtag on the streets and via social media, and the driver with the most hashtags entered on social media will win a cash prize. Alongside the primary car campaign there will be a competition on the MoneyMe website giving away $1000 of free fuel for every week of the campaign.

The campaign aims to see MoneyMe branded cars begin to flood the streets of Sydney throughout summer, each sporting a personalised hashtag, with the aim to get to 1000 drivers by April.