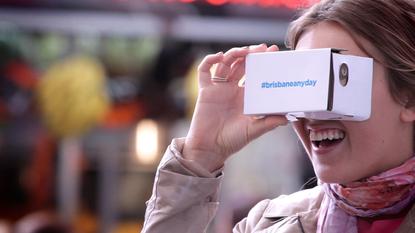 The campaign is based around a series of six virtual reality experiences in Brisbane, which include Sunday sessions outdoors to sunset abseiling, a live gig at the new music venue, The Triffid, and running onto the ground at Suncorp Stadium.

As well as being uploaded on the Visit Brisbane YouTube Channel in 36-degree video format, the immersive experience videos will be showcased via Google Cardboard VR technology to consumers at the Bondi Farmer’s Market in Sydney and Prahan Markets in Melbourne on 27 June.

To take part, consumers will be asked to step inside a giant inflatable bubble set up in each location, and put on the Google Cardboard headset.

Tourism and Events Queensland CEO, Leanne Coddington, said the campaign was all about raising awareness of Brisbane’s winter lifestyle and diverse calendar of events.

“This partnership with Google Cardboard is an authentic and engaging way to connect with our southern neighbours and invite them north this winter,” she said.

“We’re delighted to see such a creative use of technology, which will give people a taste of Queensland,” added Google Australia head of mobile, Lisa Bora.