More Asia-Pacific marketers are using mobile apps to interact with customers and have defined mobile strategies than their North American and European counterparts.

These are some of the top-line findings of the latest Quarterly Digital Intelligence Briefing: The Quest for Mobile Excellence report produced by Econsultancy in association with Adobe. The research was based on surveys of nearly 3000 marketing and digital professionals both client and agency-side, 28 per cent of which were based in Asia-Pacific including Australia.

In addition, one-third of regional respondents agreed mobile activities are central to overall business and how they engage with their customers. 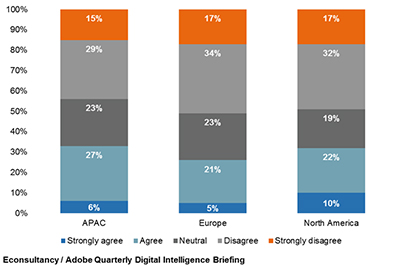 Graph: 'Our mobile activities are central to our overall business and how we engage with customers'

Mobile apps are also big business in Asia-Pacific, with 48 per cent of respondents agreeing or strongly agreeing that conversion rates of customers through apps is higher than through mobile Web. This contrasted with 26 per cent in Europe and 27 per cent in North America.

The report found Asia-Pacific respondents demonstrated more confidence in measuring the success and ROI of mobile apps than their global peers, with 47 per cent strongly agreeing or agreeing they could measure mobile just as well as their websites. This figure dropped to 35 per cent in Europe and 30 per cent in North America.

In a sign of just how prolific smartphones are in this region, the Econsultancy report also found 70 per cent of regional mobile traffic comes from smartphones, compared to 61 per cent in North America and 60 per cent in Europe.

“The state of ‘mobile-first’ has already arrived in Asia-Pacific,” said Adobe president for Asia-Pacific, Paul Robson. “The results of this research show that Asia already has mobile-centric business strategies firmly in place, while Europe and North America are still scrambling to redesign their more traditional business models and workflows.”

However, the global results proved a significant part of the global marketing community still has a way to go to truly embrace mobile. Only 19 per cent of respondents currently believe they are a mobile-first organisation, up from 13 per cent in 2014, while 23 per cent disagreed.

About half understand how mobile fits into the customer journey across devices and channels, and only 25 per cent can track customers across different devices when they choose to authenticate and login to the experience

Against this, Econsultancy found mobile spend is rising in 2015. Sixty-one per cent of global respondents plan to increase mobile investments this year, and one-third have budget specifically allocated to experimenting with mobile over the next 12 months. On average, mobile accounts for 15 per cent of overall digital spend.