How Foxtel regained control over its customer data and analytics

The journey to consolidate customer data and re-define the role of the agency has not been easy, but the future looks brighter 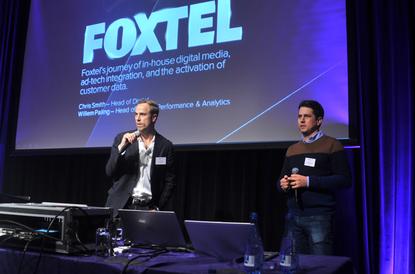 Foxtel’s head of digital Chris Smith and head of online performance and analytics, Willem Paling at ADMA’s Techmix in Sydney

Foxtel says its decision to take control of customer data and analytics from agencies and bring it in-house has been one fraught with difficulty, but has given marketing teams a better understanding of the digital marketing ecosystem.

Speaking at ADMA’s Techmix in Sydney, Foxtel’s head of digital, Chris Smith, and head of online performance and analytics, Willem Paling, revealed the four-year journey the media company has been on to date to bring ad technology in-house, and the technical and operational challenges they faced doing so.

The journey began in 2011, when Foxtel decided to bring digital media in-house and then consolidate the tech stack.

“Foxtel is quite a significant media entity, and we have a lot of relationships with News, so we’re in a good position to take our ad server and go direct to other media entities,” Smith said. “We formed a number of direct deals with these entities, and once we were at a point that we were quite confident we could do it, we decided to go to other publishers.”

Alongside the ad server technology capability, Smith said Foxtel worked to create a base level of audience segmentation.

“We were building several different segments and audience lists. For example, on our site we built a sports audience, a lifestyle audience, a drama audience that could enable us to go out there and behavioural target,” he said. “We could go to a specific vertical, for instance, if we had a sports campaign, and we could then go to a sports network and be running a sports banner.”

According to Paling, Foxtel recognised the need to take a more dynamic approach to display advertising, and at first the process was easy.

“All the ad tech stack was in Google land or on cloud-based servers and it was really easy to connect to it - we didn’t need to involve IT in the process,” Paling said. “We had a lot of quick wins and there were high fives as we were saving millions of dollars in media costs.”

However, things soon became a lot more difficult when Foxtel’s marketing team realised it needed to move out of behavioural targeting and into targeting customer data.

The learning process required understanding how to engage with IT and bring IT on the journey, and learning about documenting requirements, he said. The same went for legal in terms of data compliance to meet ACCC requirements.

“That’s something that’s been very important to us: To establish in-house knowledge and ownership of data, and to have oversight of all these different components owned by different teams in marketing,” Paling said. “When we went through this project, we probably would have done it a lot quicker if we had the traditional IT approach, got a project management report and had the project requirements go in and our system come out.”

But Paling said there were no regrets, as the result was a more robust understanding of the digital marketing ecosystem.

“We’re happy with doing it the way that we did it – things took longer but within our digital media teams and within marketing we gained a much stronger understanding of how it all works together. And when we bring in some new digital marketing technology, we know how it’s going to fit into our marketing architecture,” he said.

The changing relationship with agencies

“Being able to manage all these key components and keep the stack coherent, and developing that knowledge to be able to execute one campaign across all or many of these components of the stack, is key,” Smith said.

“What all this requires is having knowledge internally, but also agency partners to help you manage that process,” Paling added. “In bringing all this in-house, we’ve not removed the role of the agency, but it is a very different relationship… It’s also the process of re-evaluating and re-establishing our agency partnerships for digital data and also digital media. Agency partners are just as important, even though we are doing a lot of the manual implementation in-house.”

Paling said Foxtel’s media agency pool is split into strategy and implementation, with a reliance on the media agency to provide data and capabilities the in-house team can’t.

From a branding perspective, Paling said it makes more sense for ad agencies to be in charge, because they can leverage off group buys or annual deals, and get a more cost-effective CPM.

“With things like high impact takeovers, sponsorship or partnership deals, we tend to rely a lot on them,” Paling said.

From a strategic point of view, agencies also have the resources and technology to plan campaign activities, so Foxtel works together on any campaign planning and strategy, he continued.

“Where they provided a lot of value is from a business/science point of view, so we really rely on the agency’s econometrics and attribution to look at how much we’re spending by channel and with each particular publisher,” Paling said.

According to Smith, the process has transformed the relationship Foxtel has with its data agency, Datalicious.

“Our relationship with Datalicious is much more of a genuine partnership, so we share the data strategy and implementation,” he said. “We draw heavily on Datalicious’ knowledge in terms of practice – they’ve done all this before, with a whole range of clients, and we don’t want to repeat the mistakes.”

“We can go from the insights we have in a report to acting on them in hours rather than days,” he said. “The person who’s taking care of the display reporting sits metres away from the person doing the trafficking, so if we have an insight, they can have a chat and something can change on the same day.”

Creative and centralised improvements on the horizon

According to Paling, the team has come a long way on the data and media front, and has the tech stack internally to be able to buy media through cross multi-channels using data segments. However, he admitted what Foxtel should have done earlier was to bring its creative agency on the journey.

“Data should really be the source of what creative we develop – and that’s something we’re working towards and I think we’ll get a lot better at,” Paling said. To assist, Foxtel is looking to collaborate with an external technical lead that understands data, the media platforms and can really help develop dynamic creative using its tech stack, he said.

“We need to find a way through dynamic creative to make it easier to deliver to more and more segments – and to bring marketing teams along for the journey,” he said.

The team is also looking to further improve technology capability in the next 6-12 months. Both Paling and Smith have worked closely together so that everything they are responsible for in terms of digital media and on the website works cohesively.

“That’s been quite an easy process - we’ve only had to involve our two teams - and when we look at this architecture of what we want digital marketing to be like, it looks fairly simple in that we’ve got a collection layer, supertag collecting behavioural data along foxtel.com.au and across our network of channel sites,” he said. “We have customer data coming in from the data warehouse, activation of that data happening in display and onsite, and targeted emails, attribution and analytics where we’re measuring the insights.”

When it comes to the point where they need to get customer marketing, IT and channel partners involved, Paling anticipated just having two teams working together could become a bit complex to manage.

“So we’re working towards a more centralised management of new technology, and reaching the point where it’s not just IT services marketing, but we need a technical oversight of all the communications technology that is owned by marketing,” he said.

Finally, the key learnings Smith and Paling revealed they had on this journey was to work more collaboratively with new stakeholders.

“We found it very easy built for one channel, and what we built initially was optimised for display, but it wasn’t that easy to translate to other channels and we’re increasingly finding this need to establish a centralised oversight of marketing technology, and learning to work closely with data and media partners,” Paling concluded.