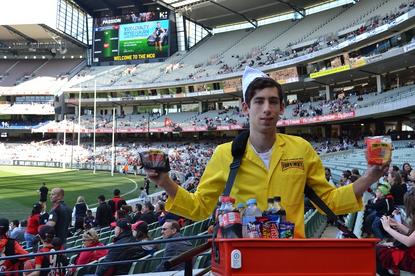 The MCG conducted two beacons trials in the second half of 2014 during sporting events aimed at enhancing the onsite experience for fans.

The first ran in September during Australian Football League (AFL) games at the stadium and gave fans the opportunity to win one of 50 Four ‘N Twenty pies if they downloaded a pass to their Android or iPhone smartphone.

Staff were equipped with beacons that triggered location-specific messages via Bluetooth to patrons’ smartphones as they move around the stadium during each match. Patrons who spotted the pie touts and presented their notification message could receive a free pie.

Communications manager at the MCG, Shane Brown, told CMO the stadium was pleased with the results of the trial.

“From a technology perspective, as well as operationally, it passed our tests and we also trialled various marketing and promotion channels,” he said.

“The trial wasn't really about numbers, it was more about gaining an understanding of how the technology worked, but also to learn about our fans' willingness and capability to engage with the technology as well as their desire to access special offers while at an event.”

A second trial was run during a Big Bash League match in January by the Melbourne Stars team in partnership with Acquire Learning, and involved giving away free icecreams to fans. This was also well received, Brown said.

While the MCG is in discussions with AFL clubs and other parties about future applications of the technology, there are no solid plans for further beacon trials at this stage, he said.

However, Brown said that beacons could become part of the MCG’s plans to install a high-density Wi-Fi network at the site later this year. The connectivity rollout is part of a wider $45 million investment announced in February to improve the fan experience onsite.

“Beacon technology is likely to be embedded into that project at some stage,” Brown said.

He also provided three key lessons learnt as a result of the proximity marketing trials. The first is to go down a minimum viable product approach.

“Definitely don’t bake the functionality into your app or build a new app at initial stages, digital passes are the perfect tool to test,” he said, highlighting Passbook and Android Wallet systems as examples.

“If you want to be nimble, passes are able to be built quickly and cheaply and should satisfy all your data needs at the same time. Incorporating the functionality into your app can come after you’ve established how it will best work for you and the business benefit.”

Brown also advised marketers to get out in the field and watch what happens. “Don’t just set and forget, observation is as valuable as the digital data,” he said.

The third lesson is having the ability to update messaging on the fly.

“So don’t go too deep if you have poor Wi-Fi or network coverage at your location,” Brown added.

Check out more of our coverage on beacon technology