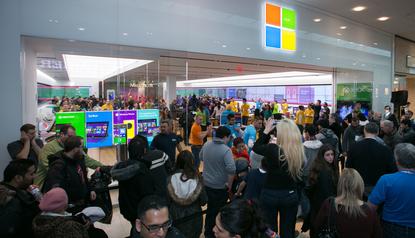 Microsoft has revealed plans to open its first branded store outside the US in Australia.

The software giant’s local managing director, Pip Marlowe, announced the plans in a blog post today, saying the store will be located in Westfield Sydney’s Pitt Street Mall and open before Christmas. The store will take up 6000 square feet of space over two floors.

Taking a leaf out of its competitor Apple’s retail book, Microsoft claims the new store will not only provide customers with the opportunity to trial core products such as Windows PC and phones, surface devices, Xbox and Office, it will also act as a service and support centre for repairs, troubleshooting and questions as well as a customer engagement hub.

Marlowe argued the retail shopfront would help Microsoft become a bigger part of the local community.

“It will embody the world-class innovation that you have come to expect from Microsoft and be a space where consumer s- from teens who love gaming to parents who want to ensure their families are safe online, to small business owners looking for guidance – can visit and learn how to make the most of their technology, so they can make the most of every moment,” she said in her online post.

To date, Microsoft has opened 110 physical stories in the US, Canada and Puerto Rico, and also has 17 in-store locations in China.

“Announcing a Microsoft flagship store in Sydney – which will join our forthcoming flagship Manhattan store – marks yet another important milestone in expanding our commitment to customers globally,” the vendor’s corporate vice-president of worldwide retail stores, David Porter, said.

“We have built an online presence across 189 countries, and we will see aggressive online expansion over the next year in markets such as South Africa, Thailand and Korea including selling Microsoft hardware devices such as Surface and Xbox One. Additionally, we will open physical store locations across North America in the coming months.

“This continues to be an exciting time for our business, but more importantly, our customers – and we’re just getting started.”

When asked by CMO the significance of the physical shopfront in customer engagement as well as how Microsoft plans to gauge the success of its retail venture, a spokesperson said the intention is to reach as many customers as possible but with a more customised approach.

“Our focus is on delivering the best choice, value and service for as many of our customers as possible, and this location allows us to reach millions of existing customers, as well as millions of new customers," the spokesperson said.

"Microsoft’s business is transforming, and we continue to invest in Microsoft stores as we see them as a direct way for us to engage with consumers and build relationships one customer at a time. This has been a long-time goal, and we couldn’t be more excited.”

News of the local investment comes after Microsoft opened a new Azure cloud computing facility in Australia last October, as well as brought Office 365 and Dynamics CRM Online to its local data centres. It has also opened an innovation centre in South Australia.