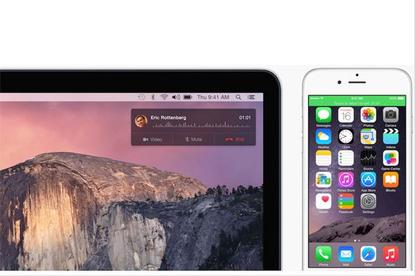 It’s a bit tricky to set up at first, but trust me, this feature is totally worth it. Your devices (e.g. iPhone and Mac) must be connected to the same Wi-Fi network and signed into your iCloud account.

On your iPhone, go to Settings > FaceTime > iPhone Mobile Calls > On.

On your Mac, go to FaceTime > Preferences, and check iPhone Cellular Calls.

Done! To place a call from your Mac, click on a phone number from Contacts, Calendar, Safari, Spotlight, or Messages, or a contact inside FaceTime. According to Apple, your Mac will even auto-dial a conference call passcode if it’s included in the Calendar event.

The Q4 2014 State of Mobile Commerce Report from Criteo, which is based on analysing transaction-level data across 3000 ecommerce, retail and travel advertisers worldwide worth US$130 billion annually, also showed mobile conversion rates are high across all devices and retail categories, further proof that mobile is about purchases, not just research.

The top category for mobile purchases was fashion and luxury at 33 per cent, followed by travel at 27 per cent.

Overall, mobile users were found to be looking at more products than desktop users before they purchased goods, while tablet converts better than smartphones. However, smartphones superseded tablets as the biggest percentage of mobile transactions. Apple and Android devices had similar conversion rates.

In the US, 52 per cent of US mobile retail transactions were on smartphones, and the top quartile of US retailers generated almost 40 per cent of their ecommerce transactions from mobile, against an average of 27 per cent for US overall.

“The report demonstrates that mobile is now about purchasing not just researching, and that there are huge opportunities for ecommerce businesses to capture increasing sales via mobile devices, particularly in the retain and travel industries,” said Criteo chief product officer, Jonathan Wolf.

“We expect mobile to rapidly move towards 50 per cent of all transactions as mobile usage continues to skyrocket and retailers better optimise mobile sites for conversions.”

Wolf said it was vital for advertisers to effectively reach them across devices.

“If you’re an ecommerce player and you’re not focusing on allowing mobile audiences to purchase from you, then you may not be in business in a couple of years.”