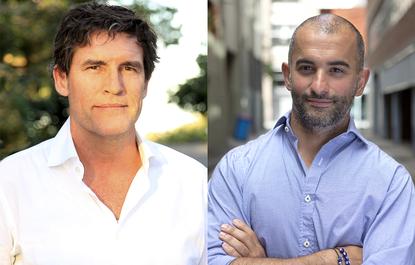 Two Australian marketers have devised a new methodology for positioning products and services that relies of interpersonal attraction to connect brands emotionally with consumers.

Robert Hutchison and Nima Yassini of advertising agency, New Republique, have penned the new book, GRiP: How to Sell More Through The Rules Of Interpersonal Attraction, which claims brands must focus on generosity and the needs of their customers in order to survive.

Hutchison is a strategic planner with a psychology and journalism background who commenced his career in research, and is focused on the psychology of how consumers connect with brands. After working in Asia for the last 20 years in branding and consumer insight, he returned to Australia two years ago and joined New Republique in June as strategy director.

Yassini, meanwhile, witnessed the dotcom boom and bust first-hand, and has a digital background. After one success and one failure during the dotcom rise of the late 1990s and early millennium, he relocated to the UK as digital director of services for JWT, running part of its European operations and picking up strategy skills and brand planning along the way. He return to Australia and founded New Republique in 2010.

The agency’s clients include Coca-Cola, Zurich and University of Western Sydney.

Yassini said the idea for its ‘GRiP’ approach stemmed from a fascination with the psychology of buying and selling. It was also triggered by his interest in how people build relationships and fall in love.

“By nature, we want to trust someone and something – it’s innate in all of us,” he said.

According to Yassini, there are three ingredients required to successfully build and sustain a relationship: Being generous and charitable with our time, building an understanding and responsiveness to that person including their likes and dislikes, and growing our “permissible proximity” to that person.

“The levels of proximity change as the levels of what’s acceptable change over time,” he said. “The same laws apply with how people buy products.”

To test the theory, Hutchison and Yassini initially delved into social psychology and marketing theory to build a case for interpersonal attraction as a methodology and toolkit for brands.

“We then did a factor analysis and devised 10 to 12 variables researchers and academics talk about that explain why one person is attracted to another,” Hutchison said.

These were distilled into three key factors: Generosity, responsiveness and proximity (GRiP). The pair then tested these through focus groups, looking at how consumers related to brands.

“GRiP is about how you realign your product and positioning to sell by being more appealing to consumers,” Yassini said. “It’s about creating a lens to allow other people to judge how to make their products more buyable.

“Advertising is a mechanism for selling. A lot of creative agencies forget that.”

Yassini said generosity could be about giving knowledge, discounts, more products per pack – anything that puts the focus on what will be attractive to the customer.

Responsiveness, the “keystone” of GRiP, he said, is about having a strong understanding of what the consumer wants. “You have to understand your consumer at a grassroots level – what is the best offer given what we know that customer. It’s about classifying people by factors of responsiveness. Be generous around that and drive proximity around that.”

GRiP is being positioned by Yassini and Hutchison as a tool for managing staff and measuring your product’s appeal, and both say it is a way to help organisations become more attractive to customers.

As an example of GRiP in action, Hutchison said the agency was called in to help a university looking to appeal to more mature aged students, a rapidly growing revenue stream for tertiary institutions. Having not previously had a strong relationship with this demographic, New Republique found the university already had strong levels of generosity and responsiveness in its products and services that fit the needs and motivations of mature aged students.

“The big issue was they weren’t accessible,” he said. “They didn’t have content for this audience and the website didn’t provide the information these potential students needed. They weren’t marketing these products and services in the right way, or setting up information at a grassroots level to connect with these new students. It was an issue of proximity.”

Hutchison and Yassini have devised key drivers under generosity, responsiveness and proximity, and claim up to 80 per cent of these are common across industry sectors. To prove it, the pair are launching a microsite to collect more data from companies in order to devise a category-specific approach to GRiP.

“Once we measure these drivers, we can see each of the areas under GRiP and understand what needs to be dialled up,” Hutchison said. “That’s what we would feedback into clients – an analysis of each and where to put their attention and focus.”

New Republique has already been approached by a sales-based organisation looking to use GRiP as a method of increasing the team’s emotional intelligence, Yassini said.

The concept of GRiP is more relevant than ever to marketers today because consumers are more informed, socially and digitally connected, and expect brands to deliver and change their behaviour if they want to attract them, said Yassini.

But he also suggested the Global Financial Crisis of 2007/2008 has had the biggest impact on consumer mindsets by encouraging them to expect savings.

“Mobile has made things more accessible, but it’s not changed the way we buy,” Yassini claimed. “Technology makes us more informed as consumers, but the GFC created situations where we had to look for more value. We now know we can get things cheaper and that we can haggle.”

The GRiP framework also lends itself to how organisations can innovate as a business, Yassini said. “No one wants to be sold to anymore – they just want to buy stuff. Companies are so focused around innovating, but they’re doing it for themselves,” he added. “This is about creating products they can sell because they satisfy customers.”