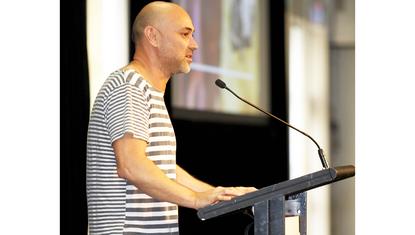 There are certain friends you don’t have to think about trusting, because they are simply trustworthy, Gelato Messina’s co-founder, Declan Lee, believes. And that’s exactly what the Australian cult gelato brand has set out to be: A customer’s best friend.

“We are a brand and a business so it’s not that pure, but if you think like that, hopefully you’ll get people understanding that you’re genuine a good percentage of the time,” he told CMO during an interview at the ADMA Engage in Sydney.

“To be perceived as genuine, you have to be genuine. There’s no point just talking about it.”

Lee pointed out Gelato Messina has customers that have continued to support the brand since its early beginnings, and that it supports in return.

“When we get those friends we try and keep them,” he said. “Sometimes it’s just recognising them by naming a flavour after them, or giving them something for free. It’s such a small thing – they spend money with us all the time and to give them something every so often shows that you haven’t forgotten they were crucial to your business.

“It has to come back to what it means to be surprised and delighted by a friend. Although you can’t do it all the time, as it dilutes the message, you can pick the moments to surprise and delight. Money can’t buy some of the best experiences.”

Lee is one of four owners behind the ice-cream brand, joining the business in 2009 after a career in music festivals. It’s this commitment and experience in building communities using storytelling and high-touch interaction that he brings to Gelato Messina.

One of Lee’s conscious decisions to date has been to avoid paid advertising. Instead, the brand focuses on building a rich base of content, using social channels as well as collaborations with other similarly minded brands.

“Paid marketing is very much a one-way relationship,” Lee claimed. “Even if you’re not getting the same stats in social media, you’re getting that immediate conversation and a feeling for things very quickly.

“I came from a background in music festivals, where you couldn’t do that traditional type of advertising. There was always this integration with your community, and so I applied that thinking to this business. Our view may change, but at the moment we have enough traction and momentum with what we’re doing to choose not to go down that [paid advertising] path.”

The strategy behind Gelato Messina’s content efforts has been an organic, collaborative and personal process, Lee said. While the company does generate most of its own content, it receives a lot of suggestions from its customers, he said.

“I’m a firm believer in nurturing friendships with customers,” he continued. “When you become friends with someone, you don’t become friends and then put nothing into it. That’s the strategy for us: It’s making sure that once that person is your friend, you’re still doing things for them that they like.

According to Lee, innovation is what keeps them interested and “keeps you on your toes”. “If you have a friend you have the same conversation with every time, you’ll get bored.”

Gelato Messina was established by founder, Nick Palumbo, in 2002 with several financial investors, but struggled in its first few years of operation. It wasn’t until Palumbo took back the original Darlinghurst store in 2006 and brought in three good friends as business partners, that the brand started really building its iconic status.

Today, Gelato Messina has six stores and is looking to have 10 by February next year, including international locations. Lee said the business is a “slow burner” in terms of expanding its store network compared to turnover.

“All four of us are really good friends in our 30s and 40s. We’ve all had businesses with good times and terrible times. Every day, we think it might be taken away from us and that anxiety I think is a good feeling to have. It means you stick to authenticity, and that relationship. You never try to get cocky.”

Lee said the group is also fortunate to have a strong product offering the business owners remain very close to. He admits it’s a lot harder for larger and more established companies who don’t have the same ability to be nimble.

“But you can buy our product for $4 – it’s not even like buying a dinner at a restaurant, which might cost you $80 or $100 – that’s a bigger commitment,” he added. “We make sure we change it all the time so you never get bored of it, and the commitment to that one thing is easier for us.”

In his presentation at ADMA Engage, Lee outlined the five key elements contributing to Gelato Messina’s brand success and how its keeps customers engaged.

Lee said strong teamwork and trust among the four owners of Gelato Messina, and with staff, has been vital to its success.

“We have an innate trust across the business partners to do the best we can do. On the food side, there is a huge amount of consideration, and the brand is bigger than all of us put together,” he said.

At Gelato Messina, commitment comes down to one core value, Lee said: Honesty. “You have to try to be as honest as you can,” he said.

“When we say we try the source the best products we possibly can, and we say we’re going to source the best pistachios from the base of Mt Etna, we do it. Not everyone does that - it’s expensive and hard but the quality will always win every time for us.”

Lee admitted brands have to fight hard to stay honest. As an example, he cited a brand activation moment during this year during the Sydney Festival earlier this year, where the team had run out of a specific product, and the chef tried to substitute a different but similar flavour in an attempt to fill the gap.

“In this case it was about trying not to let the team down when we had nothing, but we sat down and had a serious conversation and agreed we couldn’t do it,” Lee explained. “If one person found out, the trust would be gone. So we sent back the flavour and made it all again. That to me is the core to us. You do it because you believe in honesty.”

Another important ingredient for Gelato Messina is the way it talks to customers.

“We make them our friends, and try not be a faceless brand,” Lee said. “When we get those friends we try and keep them. If we make a mistake we apologised, replace it and do everything we can. It’s easy to say sorry when you have that relationship.

“If your customers are happy, they’ll be good friends. You, in turn, want to be a thoughtful, considerate and respectful friend and to do that, you need to engage in a two-way conversation. And these best friends will become the best brand advocates you can possibly have.”

In nurturing that relationship, Lee said the brand wants to foster a community and for friends to talk about its brand independently to their friends, family and in external conversations.

“You don’t get that unless you’re a great friend,” he added.

Lee was adamant customer loyalty is not dead, telling CMO that digital is simply another way of connecting.

“People are so used to thinking that social relationship isn’t as true as a face-to-face one, but it’s just different,” he claimed. “You can still have loyalty and engagement, it’s just slightly different. We just know what we believe in and that works for us.”

Lee said Gelato Messina doesn’t set out to produce content to market its brand, but instead, looks to content that will be interesting to customers.

“We’d prefer to have less fans actively engaged with what we do [in social], than thousands of passive people on our Facebook page,” he commented. “We don’t any paid marketing, deliberately, so the content must be super collaborative and genuine, coming from the heart.

“Everyone has to take ownership of that content and of the Messina brand in that moment.”

In social media, the strategy is “less is more”, Lee added.

“We post things that people want to see or engage with. Having a personality is important as well and tone of voice and a little bit of humour, and tapping into pop culture.

Innovation is another important part of the Gelato Messina brand and is what also leads to great content, Lee said.

“Whether it’s our cakes, new flavours or bespoke products with partners and branded collaborations, we have to push the boundaries,” he said. “It helps make us a leading player in our field and showing that you do something people can look up to and enjoy.

“We try to do things people will kind of look up to.”