Inside the minds (and personalities) of CIOs and CMOs

Will the two c-levels ever see eye to eye? 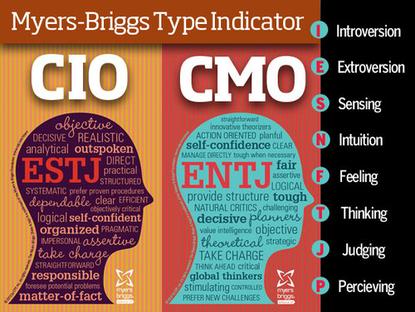 Myers-Briggs breakdown for CIOs and CMOs

Tired of waiting for lengthy approval processes, CMOs have been doing end-runs around the IT department for years. In turn, scorned CIOs would rip out the marketing department's rogue tech.

CMOs responded in kind by running to their buddy in the corner office -- the CMO and CEO are often cut from the same personality cloth -- and complain that those techies are at it again, slowing down business decisions they don't understand and letting competitors beat them to the punch.

"I can tell you horror stories," says Kevin Cochrane, a tech industry veteran who has held top marketing positions since the mid-1990s and is currently CMO at OpenText, an enterprise information management software company.

For years, the CIO and CMO have faced off in one of the rockiest executive relationships. As the two odd stepchildren in the C-level suite, they constantly must prove their worth, which often pits them against each other as they try to curry favor among their peers.

Both need new technology to be successful and they must compete for scarce dollars. Making matters worse, their jobs tend to reward opposite personality traits; clashes can get ugly.

The frenemies of the corporate world

Now, in the age of the digital customer, the CIO and CMO must work together closer than ever.

Given the antagonistic history between these two executives, it sounds like an impossible situation. At times, the CIO and CMO appear to be playing a zero-sum game. That is, one does well only at the expense of the other.

During the financial crisis, for instance, the CIO was a highly valued cost-efficiency expert who kept the company running by delivering concrete returns on investment. The CMO, on the other hand, was a "black magic" brand enhancer who wasted precious dollars in advertising campaigns with no clear return on investment. The CMO almost didn't survive and had to turn to technology to get closer to the revenue pipeline.

Today, as the economy recovers and competition heats up, the roles have reversed. The CMO's ability to show real sales flowing from technology investments in social, mobile and data analytics puts him in a prestigious position. Meanwhile, the CIO's operational role means he no longer sits at the strategic table; his C-level status is under assault. Underscoring this power shift, Gartner predicts CMOs will spend more on technology than CIOs by 2017.

In truth, CMOs and CIOs need each other to reach the digital customer and achieve the holy grail of marketing. "The only way marketing can get a holistic view of who is the customer, what they've done, and what they're most likely [to do] is by partnering with IT for true multi-channel customer analytics," Cochrane says.

But how are they going to work together?

Are CIOs and CMOs really that different?

For CIOs and CMOs to work well together, perhaps the first step is to understand how the other side thinks. It will also help if these c-level executives look inside themselves.

One of the foundational ideas behind the Myers-Briggs personality system is to help individuals better understand their own personality tendencies and potential differences with co-workers and, ultimately, find common ground. The 16 personality types in the Myers-Briggs system are not stereotypes nor written in stone, rather they are merely natural inclinations toward particular preferences.

That said, many CIOs fall into Myers-Briggs defines as personality type ESTJ:

Practical, realistic, matter-of-fact. Decisive, quickly move to implement decisions. Organise projects and people to get things done, focus on getting results in the most efficient way possible. Take care of routine details. Have a clear set of logical standards, systematically follow them and want others to also. Forceful in implementing their plans.

CMOs tend to have the personality Myers-Briggs classifies as ENTJ:

Sherrie Haynie, organisational development consultant at CPP, publisher of the Myers-Briggs Type Indicator, is quick to point out that the CMO and CIO share more similarities than differences, which makes sense given that both hold executive leadership positions. Common ground includes a need to be decisive and efficient and, perhaps most relevant, the ability to solve problems.

In the practical world, this difference can translate into variations in the perception of speed and willingness to fail, says Cochrane. When a CMO sees a change in consumer behavior or the competitive landscape, he wants to react very quickly. Marketers often come up with creative ideas on a gut feeling, and the CMO throws some money at it, assigns a couple of marketing people for a few weeks, launches, fails fast, and moves on to the next thing.

CIOs are more diligent and need to think through a project proposal from start to finish. More resources will be at stake, perhaps tens of thousands of dollars. The CIO must commit servers and developers for a month or more. "If you fail, you don't just walk away," OpenText's Cochrane says. "You iterate, iterate, iterate until it works."

Forrester Research puts the onus on the CIO to respond faster to business needs. Additionally, Forrester advises companies to "create formal, hybrid-skills groups, or digital centers of excellence, which draw on skills and expertise from IT, application development, digital strategy, digital marketing, communications, customer support, and even project management." (For more Forrester tips, check out CIOs and CMOs Must Work Together to Satisfy Customers.)

Can't they just get along?

Cochrane says he believes the IT-business relationship boils down to the CIO and CMO and their ability to work together. In order to maintain a healthy relationship, Cochrane meets with the CIO every week. They sit in on each other's staff meetings once a month, with Cochrane explaining the thinking behind marketing's outlandish requests to the IT staff, and the CIO telling the marketing staff why some requests are taking long to fulfill.

The CIO and CMO also travel to technology and marketing conferences together. They listen to and participate in the same discussions. They want to learn about the other's craft and gain insight into their different perspectives. They want to build a level of familiarity and trust. They want to help each other. In other words, they work hard at the relationship.

"I've caught myself numerous times wanting to do an end-run-around IT," Cochrane admits. He says working for a technology company can be more a curse than a blessing. "Having deep knowledge of technology isn't good. Sometimes I know too much to basically say, I can do this myself. But I stop myself because I know I'm going to hit a wall six months later when I want to do the next thing."

Knowing what not to do can be just as important. Some companies wanting to fix a dysfunctional IT-marketing relationship throw staff together in an open space. The thinking is that physical proximity leads to greater collaboration. But Cochrane says that's a recipe for disaster. Just imagine marketers in the ecstasy of the creative process surrounded by a bunch of frowning-faced IT programmers trying to code -- neither would perform well.

Lastly, Cochrane advises CIOs and CMOs not to fall back into the old habits that derailed relationships in the past. "If there's a disagreement, just pick up the phone" and call your counterpart, he says. "Don't go to the CEO, don't bring it up at a budget meeting, don't throw anyone under the bus."