Tennis fans are being served up mobile interactivity at this year's Australian Open, including a new free iPad app which enables them to follow and tweet messages of support to their favourite players.

Fans can also track player popularity online, although after last night, they may be using the app to express their disappointment at Australian Bernard Tomic's withdrawal during his first round clash with Rafael Nadal.

Australian Open organiser, Tennis Australia, has also worked with IBM to introduce IBM ReturnServe, an app that lets fans experience what it is like to face a serve from the world's top tennis players.

IBM ReturnServe analyses real-time data from every point of games at the Rod Laver Arena. This "live serve" data is displayed in a graphically-animated environment so fans can attempt to return serve at home using their computer or at select onsite locations using a virtual reality headset.

"Over two weeks of the Australian Open last year, more than 15.5 million unique users connected with the tournament online, and almost half of the website views were from mobile devices," he said.

"Each year, we aim to enhance the event experience and this year we have worked with IBM to develop a new iPad app, improve the website and smartphone apps, as well as advance the technology infrastructure behind the scenes."

Tennis Australia has been working with IBM for a few years to deliver innovative technology to players, fans, and the media at the world-renowned tournament tennis tournament.

Other technology being offered are IBM SlamTracker, a statistics and visualisation platform that uses predictive analytics and historical data to identify and broadcast key performance indicators (KPIs), providing comparisons of players' careers and live performances. 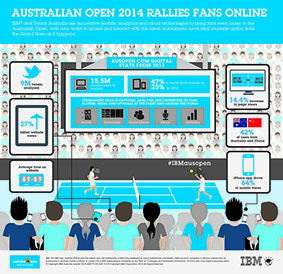 During a match, each player's performance is measured against their KPIs and updated in real time on the Australian Open website.

New features in SlamTracker this year include streamlined analysis of key turning points in a match, such as aces and winning shots, and a social media sentiment feed that measures the percentage of positive tweets.

The Australian Open Social Leaderboard - which is updated every few minutes - tracks the positive and negative sentiment for players on social media. Fans help their favourite players move up the ranks by 'liking' or tweeting favourably about a player.

Pictured at top: IBM's server room at the Australian Open.