Machines will learn just like a child, says IBM CEO 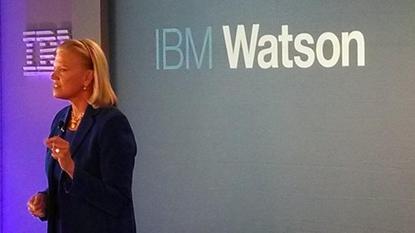 ORLANDO – Technology is shifting to intelligent machines with a capability to reason, said IBM Chairman and CEO Virginia Rometty. These machines won't replace humans, but will augment them. It is a technology that will transform business, she said.

This technology is the basis of IBM's work on Watson, its cognitive or thinking system.

Rometty, interviewed Tuesday by Gartner analysts at the research firm's Symposium ITxpo, said cognitive systems understand not only data, but unstructured data, which includes images, songs, video, and then goes a step further: "They reason and they learn."

"When I say reason it's like you and I, if there is an issue or question, they take in all the information that they know, they stack up a set of hypotheses, they run it against all that data to decide, what do I have the most confidence in, " Rometty said. The machine "can prove why I do or don't believe something, and if I have high confidence in an answer, I can show you the ranking of what my answers are and then I learn."

"The more you give me – just like a child over time – the more information, the more I learn, so they understand, they reason and they learn," she said.

But Gartner analyst Daryl Plummer expressed some skepticism. We're not talking about artificial intelligence? he asked.

Rometty said these machines are sensing systems that behave in a way that "has got some great similarities to how you and I learn."

For instance, Watson has "eyes," in the sense that it can see an image and understand it, what is happening and what the context is. In medicine, this means that if it is looking at a skin lesion it can consider whether it is melanoma or not.

Rometty, also in response to Plummer's questions about job losses and machine replacements, argued that these systems will not replace people.

Instead, they will, for instance, assist people in call centers to do a better job, or help doctors sift through treatment options.

"This is not about replacing what people do -- this is about augmenting what man does," Rometty said.

One attendee, David Liska, the division head of IT services at the Space Telescope Science Institute, which runs the Hubble telescope, agreed that the system Rometty described is needed to help shift data.

Data, is "just moving faster than we can keep up. We need help," Liska said. But he didn't agree with Rometty's assertion that these machines will reason. The machines are only as smart as the people who work on them, he said, and "unless we make another cognitive leap, I don't think so."

IBM underscored Rometty's appearance at the Gartner conference by announcing today that it had launched a consulting organization around its cognitive business, called IBM Cognitive Business Solutions.