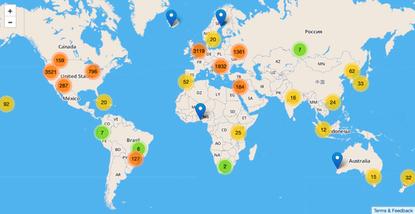 From ordering pizza online to pinpointing the exact location of a breaking news story, an overwhelming portion of data on the Web has geographic elements. Yet for Web developers, wrangling the most value from geospatial information remains an arduous task.

Both the World Wide Web Consortium (W3C) and the Open Geospatial Consortium (OGC) have launched working groups devoted to the task. They are pledging to closely coordinate their activities and publish joint recommendations.

Adding geographic elements to data online in a meaningful way "can be done now, but it is difficult to link the two worlds together and to use the infrastructure of the Web effectively alongside the infrastructure of geospatial systems," said Phil Archer, who is acting as data activity lead for the W3C working group.

A lack of standards is not the problem. "The problem is that there are too many," he said. With this in mind, the two standards groups are developing a set of recommendations for how to best use existing standards together.

As much as 80 percent of data has some geospatial element to it, IT research firm Gartner has estimated. In the U.S. alone, geospatial services generate approximately $75 billion a year in annual revenue, according to the Boston Consulting Group.

Making use of geospatial data still can be a complex task for the programmer, however. An untold amount of developer time is frittered away trying to understand multiple formats and sussing out the best ways to bridge them together.

For GIS (geographic information system) software, the fundamental units of geospatial surface measurement are the point, line and polygon. Yet, people who want to use geographically enhanced data tend to think about locations in a fuzzier manner.

For instance, say someone wants to find a restaurant in the "Little Italy" section of a city, Archer explained. Because such neighborhoods are informally defined, they don't have a specific grid of coordinates that could help in generating a definitive set of restaurants in that area.

Much of the work the groups will do will be centered around bridging geolocational and non-geolocational data in better ways -- work that the two groups agreed needed to be completed at a joint meeting last March in London.

The groups will build on previous research done in the realm of linked open data, an approach of formatting disparate sources of data so they can be easily interlinked.

The working groups plan to define their requirements within the next few months, and will issue best practices documents as early as by the end of the year.