Apple Watch: A billboard for ads on the wrist? 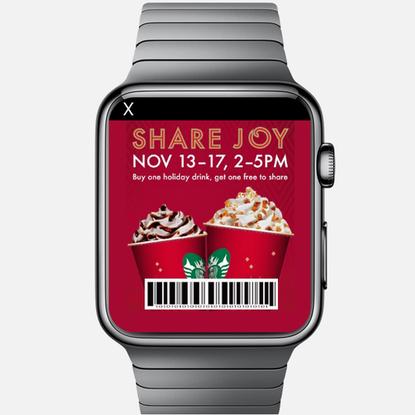 Questions abound over how Apple's Watch will function when it's released later this year. But here's one feature: It will be able to serve ads, based on the location of wearers and their purchases.

At least, that's the vision laid out by TapSense, a mobile advertising exchange that has launched what it calls the first programmatic ad platform for the Apple Watch. The platform, the company says, provides a number of tools to let developers and brands place ads on the unit that can be targeted by location, through the GPS on the user's paired iPhone, and the wearer's purchase history, through the watch's integration with Apple Pay.

Relevant location-based ads are considered the holy grail of mobile advertising, and more companies like Facebook and Google are trying to tie people's purchases in physical stores to digital ads. Still, the prospect of super-targeted ads on the Apple Watch following wearers around might strike some as a disappointment, given the unit's already steep starting price of US$349.

And TapSense seems quite bullish about how far marketers could take this. "Apple Watch has the potential to be a category disruptor similar to iPod or iPhone and we believe that it provides great opportunities for brands and developers to deliver engaging experiences to consumers," said Ash Kumar, co-founder and CEO of TapSense, in the San Francisco-based company's announcement.

The accessibility of the Apple Watch makes it an ideal device for hyper-local offers such as retail store coupons, TapSense said, better than a smartphone inside a person's pocket. And because the watch will support Apple Pay, Apple's new mobile payments service, marketers could measure their campaigns based on people's purchases in stores, the company said.

Apple's Watch is slated to be released some time "early" this year. Apple launched a framework for developers to build software for the unit, called WatchKit, in November. TapSense's platform can deliver ads through convergence of WatchKit and other mobile technologies, the company said.

The TapSense platform, for instance, can make the ads interactive by leveraging interfaces supported by WatchKit, like watch faces, the company said.