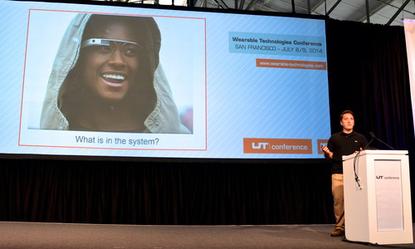 Google has big hopes for its Glass head-mounted computer, chief among them a desire to make the unit smaller and more comfortable to wear.

Those were just a couple of the goals for a polished version of the device laid out Tuesday by Babak Parviz, the creator of Glass, who is also the director of Google's "X" special projects division.

"Essentially we'd like to make the technology disappear," he said during a conference on wearable technology in San Francisco.

"It should be non-intrusive" and as comfortable to wear as regular glasses or a wristwatch, he said.

Shrinking the unit would require advances in optics and photonics, he said. More computing power is also needed to make the device faster at answering people's questions on the fly, Parviz said.

Google is also looking at new ways to interact with the device, which currently can be done both through voice commands and by tapping the unit.

Glass is currently a beta product that Google calls the "Explorer" edition, though it can be purchased online for US$1,500. A polished version aimed at the broad consumer market could launch next year.

Google is positioning Glass as the next big thing beyond smartphones, partly by providing easier and faster access to information.

Since the unit's unveiling in 2012, it has attracted the attention of early adopters who see the promise in Google's pitch. But it has also prompted questions and some criticism, including privacy concerns related to its camera and doubts about how useful it actually is.

In San Francisco, some people have been attacked for wearing the device out in public.

Parviz did not directly address Glass' critics, but he did say that the version of Glass that exists now is "a nice, solid first step to where we want to go."

Moreover, the amount of information that Glass is capable of gathering about its wearers is a key advantage, Parviz said. Glass gathers information about its users based on how they use it, and by being paired with their smartphones. The unit also has components like an accelerometer and gyroscope inside.

A major goal, Parviz said, is to employ those various technologies to make information immediately accessible to the wearer.

"Glass is very aware of the user," he said. "There's consequences to that, and things to consider and be careful about. But there's also opportunity for a computer that's very close to the person."