Guest opinion: Why you need to revaluate and 'pivot' your Facebook strategy

“Facebook used to be a space for brands to connect with their followers and fans – now we are an advertising platform.” This was part of the opening address from Stephen Scheeler, Facebook’s head of ecommerce, at a retail marketing conference in May.

His comments confirmed a trend we’ve been seeing for a while. Facebook has been progressively changing its News Feed algorithm to reduce the organic reach of News Feed posts, with average organic reach dropping from 16 per cent in Feb 2012 to around 6.51 per cent in March this year. Facebook is on record as saying it is likely to go as low as 1 to 2 per cent. 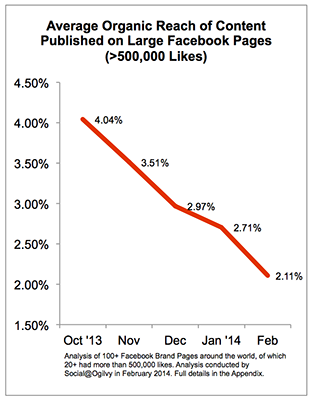 There has been significant outrage from brands, and even God is complaining and getting his disciples to remain loyal by suggesting they get notifications. 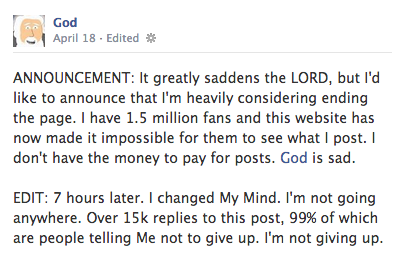 More recently, Facebook has made further adjustments to the algorithm to discourage unwanted behaviour from brands, punishing likes and share begging. The net result is that it is now extremely difficult for brands to easily and freely access the follower communities they have painstakingly spent time and money building up and reaching organically.

In a blast of ‘unintended consequences’, the new algorithm has landed up annoying Facebook’s user base rather than being seen as a benefit, as evidenced by this petition on Facebook (and its accompanying irony), receiving more than 250,000 likes and 624 ,304 shares. 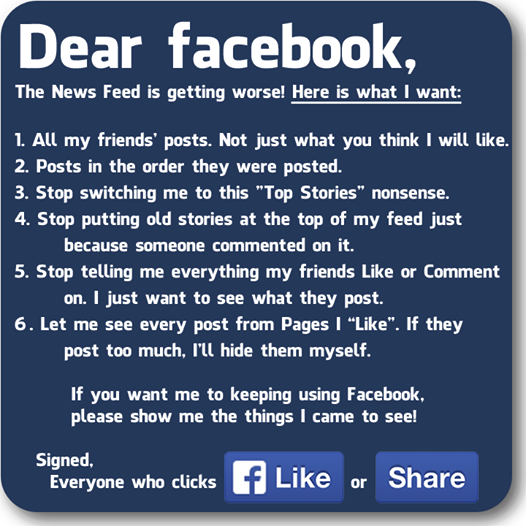 Overall, Facebook’s moves to quickly commercialise and monetise post-IPO are leading it to change functionality and reach in ways that seem to be frustrating both users and paying customers.

So should brands pull up stumps, take their bat and ball, and move on? Should we look Pinterest, Twitter or YouTube to create owned communities that can drive earned media? Not at all; that much reach isn’t easily given up. But brands should be rethinking how Facebook is used, and start seeing it as a hybrid paid / earned / owned space with its own unique needs and characteristics.

The key strengths of Facebook are the level and length of engagement users have with it, and therefore the ability for advertisers to target niche groups of people in an ongoing manner. Those groups of people include their own followers, as well as tight segments and ‘look-a-like’ audiences.

While user satisfaction (anecdotally) is decreasing, it is still the 800-pound gorilla of the online space. But rather than seeing it as a channel within the owned media content marketing strategy, it’s becoming increasingly important to ensure marketing budget is allocated not just to follower acquisition, but to generate the reach required that drives audience engagement and gets the message out there.

At the same time, Facebook also has unique content requirements in that the best performing ‘ads’ on the social site are those that sit in newsfeeds and have a strong content message, rather than a brand product message. The need to keep creating content for the space therefore remains. It’s how that content is funded and how its performance is measured that is changing.

Facebook plays an important role in reaching both current and prospective customers, and brands need to ensure their media, advertising and content teams have a cohesive strategy and approach to the platform to ensure they get the most out of it.

About the author: Mike Zeederberg is the managing director and joint owner of Zuni and oversees the development and delivery of most client strategic work. He has more than 13 years experience in the interactive marketing industry, both in digital integration and management roles with traditional agencies such as Batey Ads in Singapore, Brann in London, FCB and as Managing Partner of Euro RSCG Interaction in Sydney, as well as leading a digital pureplay agency during his 3 years as MD of Profero Australia.