New Ipsos report for the World Economic Forum looks at consumer familiarity with VR, AR and metaverse, the gender attitude towards them and use cases 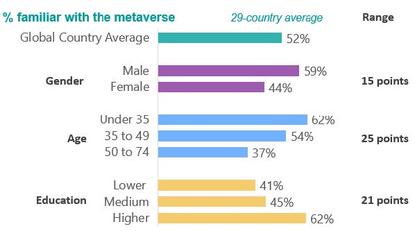 Less than half the Australian population are familiar with the metaverse and only 36 per cent express positive feelings about engaging with extended reality in daily life, putting the country well behind globally on interest.

That’s the top-line finding of a new global survey conducted by Ipsos for the World Economic Forum. The report surveyed adults across 29 countries and found 52 per cent overall are familiar with the metaverse, compared to 44 per cent in Australia. Globally, half expressed positive feelings about engaging with it, again higher than the average locally.

According to Ipsos, eight in 10 Australians can claim familiarity with virtual reality (VR), and 51 per cent said they’re familiar with augmented reality (AR). The results made it clear familiarity declined the older the adult surveyed, presenting a 25-point gap between the under-35s and those aged over 50.

The report also showed men with much more positive feelings towards extended reality than women (42 per cent versus 29 per cent). In terms of familiarity with the metaverse, the global average between men and women sat at 59 per cent and 44 per cent, respectively.

As well as familiarity, positive feelings towards extended reality decreased with age but were found to increase with income and education, with a 21-point gap cited between lower and higher educated cohorts.

As for use cases, local respondents saw metaverse applications most impacting virtual learning (65 per cent), followed by digital health resources (61 per cent) and digital entertainment in VR (60 per cent) in the next 10 years.

“The findings from this latest global survey show that Australia is well behind a lot of countries around the globe in terms of our familiarity with extended reality and our feelings towards it,” Ipsos Australia director, David Elliott, commented. “What we know from other research is that as familiarity improves, so too does the potential for trust and positivity.  As we hear more about these technologies and learn more about them, it is likely we will become more positive about them and their potential to hopefully have a real impact on our lives.”

Ipsos also noted excitement about extended reality is significantly higher in emerging countries than it is in most high-income countries. For example, more than two-thirds of consumers in China, India, Peru, Saudi Arabia and Colombia, said they had positive feelings about the possibility of engaging with it. Against this, it’s fewer than one-third in Japan, Great Britain, Belgium, Canada, France, and Germany.

The Ipsos surveyed canvassed 21,000 consumers across 29 countries in April and May 2022 including 1000 in Australia.