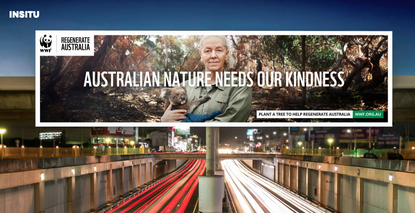 Reaching and engaging the ‘quiet Australians’ who care about climate change and nature in order to trigger national action is driving a new multi-year campaign platform launched by WWF-Australia this week.

The fresh public-facing campaign is the first for the $300 million ‘Regenerate Australia’ initiative announced by WWF-Australia last October, aimed at kick-starting wildlife and landscape regeneration projects across the country. The multi-year program was launched in response to the devastating bushfires that hit Australia in 2019-2020, and sees WWF-Australia working with government, private sector, NGOs as well as consumers on both restoring nature as well as future-proofing Australia against further climate disasters.

WWF-Australia is doing this by centring on four key initiatives: Doubling the number of koalas on Australia’s east coast by 2050; halting biodiversity loss by protecting and restoring forest and woodlands; fast-tracking adoption of renewable energy; and mobilising and funding innovation that can help future-proof Australia’s nature and wildlife.

While the not-for-profit has been very successful in engaging what it calls the ‘green bubble’ movement, WWF-Australia CMO, Yves Calmette, said a project of Regenerate Australia’s scale requires much broader reach.

“We need to have many more people joining us to make a massive difference,” he told CMO. “This is why this campaign is different – it’s a multi-year campaign and one that’s going to try and engage with a much broader audience. In particular, the ones we call the ‘quiet Australians’ – people who are interested in nature and climate but haven’t been engaged before as they are either overwhelmed, feel guilt or think it’s too late.

“It’s time to go beyond the green bubble and try to have as many of these other Australians as possible to join us. This is the biggest regeneration program in Australia and we need everyone.”

Research has been vital, both in terms of informing campaign communications and creative, but also timing and appetite for engagement. A key research task has been understanding how people’s views of nature have changed since the devastating bushfires occurred and sentiment as the Covid pandemic progresses.

“In the bushfires, we saw a surge in generosity and engagement like never before. But the key question we had was now we are in Covid, with health super important, how is the environment being perceived in terms of priorities,” Calmette explained. “Since Covid started, we have not seen decline in Australian donations and engagement. The generosity of Australians is incredible. What we also saw in the research was that people at home, and when we don’t know when this crisis will end or how, that we all like to be able to see light at the end of the tunnel.

“As a result, engagement and the desire to do something for the environment remains super high on the list of priorities. We have not seen that level of engagement for years.”

Extensive research also led WWF-Australia to a powerful cultural insight that now lies at the heart of the Regenerate Australia communications platform: Australian nature isn’t just where we live, but also who we are.

“This is something everyone agrees on and it’s super powerful. What’s missing is we don’t acknowledge that when we destroy nature, we also destroy our sense of identity as Australians,” Calmette said. “Whether you’re something who is totally convinced or someone who denies climate change, everyone agrees on that.

“With this campaign, we want to instil the responsibility to take action by calling on Australian qualities we are all proud of – kindness, knowledge, hard work. It’s how we ended up on our creative headline hook: Australian nature needs our Australian nature.”

The new campaign debuting this week centres around this simple appeal. The main TVC has been filmed from the perspective of animals impacted by the 2019-2020 bushfires and was produced by whiteGrey. Viewers visit a wombat burrow during a fire storm, go behind the scenes at a koala hospital, and take flight with a flock of cockatoos. Also featured are a cast wildlife carers, farmers and Indigenous rangers.

The TVC was shot on location at Freshwater Creek Farm, West Barwon Reservoir and Jirrahlinga Koala and Wildlife Sanctuary in Victoria, and the bushfire-affected area of Merimbula in NSW. The TVC concludes with the call to action, ‘plant a tree to Regenerate Australia now’. The creative is also being utilised in social media channels.

WWF-Australia has extensively tested the campaign and concept to ensure it resonates given the current context.

“All the tests show that we won’t succeed in reaching those quiet Australians without overcoming barriers of fear and guilt to become engaged,” Calmette commented. “That’s critical for us. We see the same with indigenous communities – we are talking about Australian land and nature.

“It was important this concept could resonate with indigenous communities as well, and it does really well… We have taken a validated the approach since the beginning and that gives us confidence this concept will resonate.”

As the public-facing campaign makes its debut through above-the-line TV and outdoor advertising, plus digital and social channel activities, a critical measure of success for WWF-Australia is ensuring consumers are aware of what needs to be done.

“Science says we have 10 years to bend the curve of nature loss. People are aware it’s critical, but what they don’t know is there are solutions. We want them to be aware of the Regenerate Australia program, and that they can do little things which make a massive difference,” Calmette said.

Engaging as many Australians as possible in the ecosystem is another metric. WWF-Australia has created a portfolio of engagement and donation offerings aligned with Regenerate Australia. And for every consumer that signs up to support Regenerate Australia, the NFP will plant a tree.

“In the past, we had specific campaigns but often the only way for people to engage was to adopt a koala or provide a donation,” Calmette said. “That was highly successful, but it talked to specific demographics. We want to have many ways for people to donate or engage depending on who they are. Some people want to donate and don’t care which way the money goes; others want to donate to specific projects’; others don’t donate but want to do something.

“We are developing the best range of products or engagement opportunities for people to choose from depending on the way they want to engage. This is how we hope everyone will be able find something in the WWF-Australia proposition relating to what they want to do.”

Informing this is work on user experience, customer journeys and conversion paths, as well as technology investments.

“It’s one thing to engage as many Australians as possible, it’s another to keep them and nurture that relationship,” Calmette said. “For example, we invested in product pages for the Regenerate Australia platform to help us. And just like we did in the planning phase, we are constantly testing and validating our approach and adapt our messaging and products to keep as many Australians over time.”

The launch campaign runs in July and August and is expected to adapt and continue through FY22. Phase two of creative will see WWF-Australia highlighting specific qualities of Australian nature, such as kindness and knowledge featuring indigenous rangers, through specific executions in out-of-home.

“We have had a successful model based around specific campaigns or specific topics. This time it’s talking about something that’s never been done before and via a unifying platform, not only with consumers fundraising, but also partnerships with innovation at its core,” Calmette added.