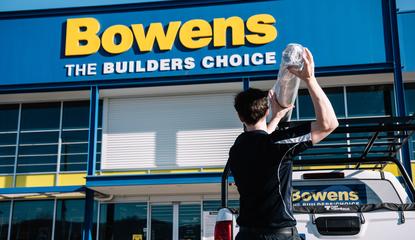 In a world that seems to be inevitably drawn towards digital service delivery, few sectors have shown the same level of resistance as building supplies. Even the market behemoth of the retail side of the hardware industry, Bunnings, only got its ecommerce act together in 2018.

But with Generations Y and Z making up an increasing proportion of the industry’s workforce (the Australian Government lists the average age of a construction worker as 34), they are bringing their expectations of smooth digital engagements into their working lives. For 127-year-old timber and hardware business, Bowens, that represents the perfect opportunity to win the trade and loyalty of a new generation of Australia’s booming building industry.

Andy Bowen re-joined the family business six years ago as chief investment officer to work alongside his brother, CEO John Bowen, and father and chairman, Jack Bowen. He had been working as an investment banker in New York but saw an opportunity to help revitalise the business that was originally founded by his great grandfather by taking it in a direction the rest of the industry was yet to follow.

“And certainly from a digital perspective, we were lacking. But then the entire industry was.”

While some hardware chains had made efforts around online retail sales, none had stepped up to create a digital experience for bulky items such as cladding and flooring. Bowens saw the primary blocker as being the complexity of moving large and often fragile products in a manner appropriate for the needs of builders on sites.

The solution was to repurpose Bowens’ 16 stores across Victoria and its extensive range of delivery options by creating a digital front end and making promises around tight delivery times.

“We have stores that are set up in an industrial manner which works perfectly for distribution when it comes to an online offer,” Bowen says.

The ecommerce site was launched as a retail service in December 2020, and to date has generated a sevenfold increase in website traffic.

“I certainly didn’t expect that in a six-month period,” Bowen says.

Alongside the ecommerce capability, Bowen has overseen the creation of a complete marketing and ecommerce team within Bowens, which now numbers 10 and will grow further. Bowen has also been working with building industry influencers to spread the word, including Block-winning builder, Matt Menichelli, and qualified carpenter and site manager, Stefanie Apostolidis, who runs the women’s building industry worker support group, Melbourne Chippy Chick.

“Prior to the pandemic, I would have said only 5 per cent of our budget was digital comms. Now it is more like 55 per cent or 60 per cent of our marketing budget,” Bowen says. “It’s been effective for us, and we’ll continue to push harder on that.”

While the initial ecommerce offering was targeted at a retail audience, Bowen says the company has now created a log-in for trade customers  It also has an awareness campaign launching in mid-July.

“It is more about brand awareness than conversion ratios at this stage,” Bowen says. “That will start to change, but certainly in this first six months it has been all about awareness, and we will continue to push there, because trades aren’t used to shopping online – the offer just hasn’t been here in Australia.

“To be the only ones really offering bulky supply to market to builders and trade and DIY and general public is a great thing - we’re loving it.”

Bowen estimates there is around another year’s worth of development work to be done on the site before Bowens completes its current scope of work. He likens the current atmosphere to that of startups he observed in his previous life.

“It is exactly like running a startup, but we are sitting in a 127-year-old business,” Bowen says. “It is a lot of fun, and we have great capital support. We are creating something new and that is the attractive thing for a lot of the team members. This is an industry that hasn’t been able to do it effectively, and an opportunity for us to make a name for ourselves and create a legacy.

“You’ve got this younger generation coming up that almost expects it, and if you’re not there, you will lose market share. This is a long-term investment for us, we have done it to make sure there is a fifth and sixth generation for this business.”