Airline extends new audio branding across the full customer journey and from digital advertising to call centres, lounges and onboard 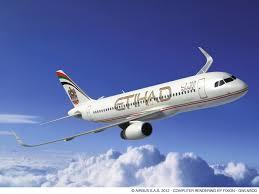 Etihad Airways has adopted sonic branding in a big way, extending its new audio marketing efforts across the full customer journey in a bid to raise unprompted awareness and brand connection.

The UAE airline has partnered with Sixieme Son to develop what it’s claiming is the most ambitious and robust sonic system created by an airline, with an audio branding that takes its cues from the company’s Arabic roots. It’s being employed from booking through to landing and advocacy touchpoints and extended across digital communications, TVCs, terminals, ringtones, lounges, the call centre and onboard flights.

Etihad Airways VP brand, marketing and sponsorship, Amina Taher, said the brand’s promise is about bringing the world to Abu Dhabi. “Inspired by the UAE capital, the launch of our sonic identity is an expression, not just of our home, but of our culture,” he said.

“It is an eclectic mix of Emirati and international instrumentation and arrangements, played by musicians from the UAE and around the world.”

Among the various inspirations for the sonic identity was traditional Al Sadu weaving. Sixieme Sons said it blended traditional instruments, both organic and electronic and including the ney, kanoon and oriental percussion, in order to attempt to reflect the weaving process. Local musicians were brought in to produce the audio.

“Etihad guests will hear dozens of bespoke music tracks which have been built from the same sonic DNA when onboard our aircraft, in our lounges, at events, when calling the contact centre, on the radio or when watching our videos,” Taher said.

Sixieme Son MD, Laurent Cochini, said the ambition is to create positive brand memories. “Etihad really understood the power of sound and how it can enrich the conversation with its customers,” he continued.

“With its sonic identity, Etihad successfully connects employees, travellers and customers throughout the world and sets a high standard in creating customer engagement.”

The sonic brand has won Gold in the Best Use of Audio Branding category at the Transform Awards Middle East/Africa.

Another brand that has invested significantly into sonic branding is Mastercard, which followed up a decision to drop its name from its brand mark with a new sonic brand identity aimed at connecting its brand offering globally.

An audio branding effectiveness research study launched in Australia in 2020 by Southern Cross Austereo in partnership with audio intelligence platform provider, Veritonic, found the most impactful sonic brand identity in Australia was that of Bunnings. Rounding out the top five in this list were Victoria Bitter, Toyota, McDonalds and Telstra.