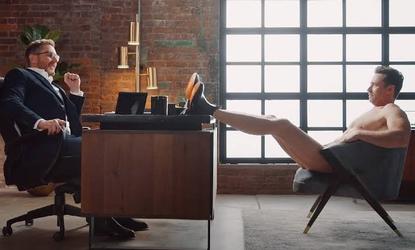 Hayward was initially brought on-board in 2017 to head up a project management office working with CEO, Raju Vuppalapati, and former business owner, L Catterton, on a fresh investment approach. He also took up the marketing mantle at the same time.

By the end of 2019 and thanks to a significant brand turnaround that saw the group concentrate efforts around its core handcrafted boots, the company was ahead of financial targets and had embarked on a sale process. RM Williams was acquired by Andrew Forrest’s Tattarang business in October 2020 under a $190 million deal, putting the business back into local hands.

“From the onset, I committed to the PE firm and my CEO that I would work through the sale process and then a three-month transition - but made up my mind to move on after the sale,” Hayward told CMO.

Having been brought on with a specific role and delivered against it, Hayward said it was time to hand over the reins. The work he’s orchestrated to date saw Hayward recognised on the 2019 CMO50 list of Australia’s most innovative and effective marketing leaders.

“The brand and business is in the best shape it’s been in its 90-year history, so as a ‘care taker’ of the brand, it was time to hand over the reins for a new chapter and challenges to the next ‘brand care taker’,” Hayward said. “For me, it was just the right time, with so many dreams yet to fulfil and a constant yearning for learning and a love of chasing challenge.”

With such a “phenomenally fast paced, rapid change tenure”, Hayward said he was hard pressed to pick one major milestone over the last four years. But he was clearly proud of the evolution and development of the marketing team.

“That gave me the confidence and ability to make the decision to move on,” he said. “A deeply passionate group has been built up from a core brand team in 2017 to a strong global marketing team across all facets - from the newly created CRM team and new global media and digital team to very strong brand environment and VM team.”

“The team’s flexibility and nimbleness, executional clout and understanding of the brand has delivered some of the best in-class marketing over the years,” Hayward continued.

“The evolution of brand and marketing output that supported the business to deliver over 3000 per cent EBITDA growth is a huge achievement for the entire marketing team and business. I’m extremely proud of this during the challenging retail landscape that Australia faced over the last few years and the incredible bounce back the brand saw because of its strength through the worst of Covid-19.”

“We saw phenomenal brand results ROI-wise and impact across business - but mainly being able to bring that to life with Hugh, his team and George at Maximum Effort was wonderful. I could only wish that every campaign development was this easy because of such amazing partners,” he said.

As to next professional steps, Hayward has registered his former Hong Kong brand consultancy, A Gentleman's Opinion, in Australia. He also flagged plans with a former colleague and friend in the private equity space around a venture in the FMCG space, as well as conversations with brands in completely different fields.

Prior to joining RM Williams, Hayward was head of marketing and omni-channel for deckers Asia-Pacific. He’s also worked in senior marketing roles across Quiksilver, DC Shoes and Sony Ericsson as well as for Dentsu across Asia-Pacific, Japan and China.

He joked after six years as a change agent within PE owned brands, a 'small' rest, some quality time with his five-year-old daughter and two-year-old son, and a catch-up on date nights with his partner are on the agenda first.

“I can’t say too much but knowing my inability to sit still there should be some news reasonably soon,” he added.