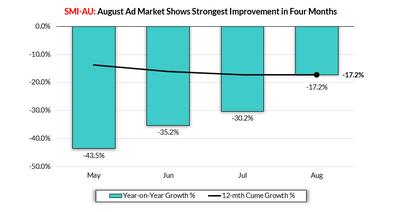 Digital media was the least affected channel, reporting a year-on-year fall of 4.7 per cent in ad spend. Driving growth in this category are social media and video-based websites, such as TV streaming sites.

SMI A/NZ managing director, Jane Ractliffe, said the Australian market improvements mirror circumstances in other regions such as the UK (18.7 per cent fall in August), Canada (10.6 per cent fall) and New Zealand (fall of 18.1 per cent). The US market also returned to growth during August, driven by higher ad spend in both TV and digital media channels.

“The great news is that in all sophisticated media markets, the level of decline in ad spend has now fallen well below 20 per cent, while in the US, advertisers have quickly returned to TV with most of the extra advertising spend flowing to news and revived sports programs,” she commented.

According to Ractliffe, a major driver of growing ad spend was a second month of stronger spending from retailers including supermarkets, chemists and online retailers. Combined, this drove a 20 per cent increase in retail category ad spend.

For Ractliffe, it’s a significant turnaround from just two months ago, when ad spend in all 40 categories was in decline.

“Demand is clearly picking up as this month we’ve seen strong double-digit growth in ad spend for household cleaning products, technology businesses and smaller categories such as oral and haircare,” she said.

Yet it’s not all rosy. Travel, live entertainment and the cinema and theme park categories are still reporting devastating declines in ad spend as they continue to be impacted by Australia’s ongoing COVID-19 restrictions and climate, SMI reported.

Overall, SMI said spend for Australia’s calendar year-to-date also continues to improve, with the market now back 24 per cent over the previous eight-month period.