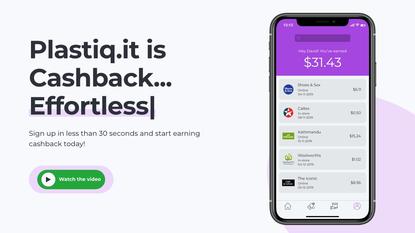 Startup Plastiq has launched an equity crowdfunding campaign on Equitise to raise $400,000 for a new cash back rewards business.

Plastiq has built a a proprietary technology platform in a bid to capture a share of the AU$275 billion Australian retail market opportunity, while providing customers greater value from their shopping, and merchants value in customer insights. Plastiq co-founder, Andrew Banks, explained to CMO the group created the platform to do away with multiple reward systems “that don’t talk to each other, leaving consumers confused and missing out”.

“Imagine if you were to have one program that consumers could use at all of their favourite retailers. The best part about Plastiq is that it is effortless and it doesn't require you to carry around loyalty cards or coupons,” Banks said.

Plastiq was founded in 2018 by Banks, an Australian entrepreneur, Shark Tank judge and investor, along with David Anderson and Tricia Stevens.The fintech startup plans to create a 360-degree view of a customer’s behavioural spending habits and patterns and links this to a rewards program, which allows consumers to receive up to hundreds of dollars back within the first year.

Banks pointed to big players starting to offer cash, rather than point, in loyalty programs as evidence cash is king when it comes to rewards.

“Apple has just introduced its credit card in America that is all cashback and no points. Brands like AMEX have made a name for themselves with various alliances that issue points, but have now gone to market with their own cashback card to combat Apple,”  he said.

The platform has over 2500 members and more than 500 Australian retailers onboard. Members receive cashback to their Plastiq account on their in-store or online purchases at participating merchants, without the need for merchant integration, loyalty cards or receipts.

In addition to the rewards system, merchants are able to integrate superior targeting methods, increase visits and find the best allocation of engagement for all customer types. With the power of offline transactional data, merchants can measure attribution and maximise the returns on marketing spend.

On the question of protecting member privacy, Banks explained to CMO it’s a priority, and all personal data is anonymised and members are rewarded for their trust.

“We live in a day and age where data and privacy aren’t just a consideration – they are becoming a human right. Look at the laws that have been recently passed and are now functioning in California. Who doesn't have access to your data? It is being sold by everyone to anyone. We believe that if we can provide you fair and equitable value for your data and house it securely, consumers are better off.”

Banks says Plastiq has reinvented traditional customer loyalty by turning the way personal data is collected on its head.

“Rather than merchants collecting data points on what they already know and have visibility on, Plastiq handles all of the data and tracking to the point where it can identify returns and credits in real-time.”

Encouraging your customers to come back time and again is just as important as it has ever been, says Banks, and competition from all sides is putting more of an emphasis on loyalty programs as retailers try to compete.

“Local retailers are competing with the likes of Amazon and other multinationals with multi-million dollar budgets, and consumers are the beneficiaries in a big way capitalising on the consumer-centric propositions being offered.

Plastiq hopes to raise a total of $400,000 via its crowdfunding campaign and is offering shares at $1.25 per share.