Traditional media unite on initiative to advertise advertising to c-suite 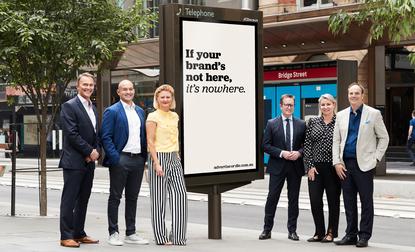 Traditional media from across the TV, outdoor, print, premium digital and radio industries have joined forces on what they’re claiming is the biggest combined campaign in this country’s history to encourage c-level executives to put their dollars behind advertising.

Kick-starting the initiative is a new campaign, aimed at reminding CEOs and CFOs in particular of the importance of advertising to long-term success of brands. The campaign is also being pitched as a way of encouraging CMOs to put their marketing dollars back into traditional media channels.

The creative tagline is ‘If your brand’s not here, it’s nowhere’, and is complemented by what the companies call witty, tongue-in-cheek, channel-specific executions, all designed to remind c-suites of the importance of advertising and to try and challenge the more cautious conditions currently existing in the advertising market. The ads also include stats, such as one stating short-term campaigns are 50 per cent less likely to deliver large profit growth.

The creative was developed in partnership with Saatchi & Saatchi and started running across all participating media player’s assets on 8 December. Supporting the campaign execution is an information portal, advertiseordie.com.au, which features statistics and information emphasising the power of each respective premium media.

In a press briefing to discuss the new initiative, Mark Ritson, the campaign’s spokesperson, and a well-known industry commentator and former professor in marketing at multiple universities locally and internationally, noted most indicators in the Australian market pointed to us already being in an “advertising recession”.

“There is genuine concern that next year, our senior business leaders will cut back even more in the face of what might be a tightening economic environment,” Ritson claimed.

One of the reasons Ritson attributed this to is the fact most Australian businesses are using marketing spend mechanisms that are “ropy at best”. These see too many applying an estimated figure and ad-to-sales ratios against annual revenue projections lacking insight into the true value of advertising on brand long-term, he said.

“The problem is if you know how much you are going to make next year, and you’ve written the figure down, you’ve essentially decided advertising is a cost and tax, not an investment in generating that revenue number,” Ritson said. “This arbitrary percentage figure makes it very easy for any business leader to tweak that down in order to put more money back to the bottom line in what is apparent saving, but in the longer term costs money.

“There is a genuine suggestion this challenge is coming to many Australian businesses in 2020.”

Yet it’s clear from ongoing research advertising remains a positive force on the economy, Ritson said. “I don’t expect the CEO or CFO to spend more money only to help the economy, but it bears repeating,” he said by way of positioning advertising’s constructive role. He noted Deloitte figures from Europe showing every dollar spent on advertising delivers $7 to the GDP.

What should resonate more with senior leadership is research showing any pull back from advertising investments comes with an even greater price tag when you decide to return to market, Ritson said.

“You build up brand equity and mental availability over time,” he continued. “If you pullback or pull out completely for a while, we’re learning from extensive research that getting back in the game later costs a lot more money. So staying with a long-term investment is the right way to approach your marketing spend.”

As he’s already well known for saying, Ritson also again criticised Australia’s marketing fraternity for being too obsessed with ROI.

“Bizarrely, it’s not a helpful metric in most advertising situations,” he said. “The ‘R’ being measured is done over too short term a period. We know short-termism in Australian marketing is not just bad, it’s getting worse. Most Australian marketers are investing their money where they see an immediate return on dollar investments. It’s a false economy.”

And as is cited in the new ‘Advertise or die’ campaign, if all Australian businesses took a longer-term, brand view, whatever the economic conditions, they’d put 60 per cent of dollars on more marketing in the long-term, top-of-funnel, non-targeted ad spend, Ritson claimed.

“This builds brand, generates demand and secures price premiums you could harvest down the bottom of the funnel with good short-term marketing.”

“It’s the very thing most Australian businesses need, but it’s the thing I expect to see cut the most,” Ritson continued. “I want to help Australian businesses to spend their money properly, right amount and allocate in the right way. I couldn’t support the messages in this new campaign more strongly.”

Executives from media companies behind the latest campaign and initiative were also united on the fact that Australia’s advertising market was about as tough as it’s ever been, with July and August conditions “extremely tough” and “unprecedented” for media companies.

They all stressed their hope the initiative would encourage CMOs to “be braver” and “have the confidence” to go against the short-termism tide and put their money back into traditional media.  One suggested the best ROI possible from the new campaign would be “to look back and see Australian businesses have confidence in marketing campaigns and advertising” again.