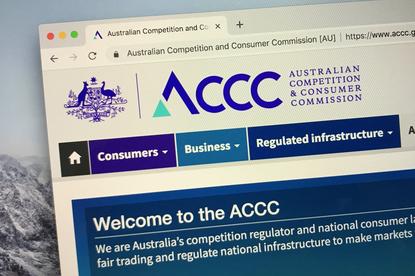 Submissions are now closed following the Australian Competition and Consumer Commission's (ACCC’s) draft report highlighting a number of concerns about customer loyalty programs, in particular the sharing of consumer data without consumer knowledge.

In its draft report released in September, the ACCC warned customer loyalty schemes, including frequent flyer, supermarket and credit card operators, must ensure they are not misleading consumers.

The Customer Loyalty Schemes draft report highlighted a number of concerns, including whether consumers receive the benefits advertised by loyalty schemes. It also called for unilateral changes by loyalty schemes to their terms and conditions, highlighted poor communication about how such schemes work and poor disclosure about how consumer data is used and shared. The consumer watchdog noted selling insights from consumer data to other parties without consumer knowledge as a particular concern, as well as sharing consumer data with unknown third parties.

“Many people think they can redeem their points for a free flight, but in some cases, the cost of purchasing an airfare without using points may be similar to the cost of a flight using points once the airline adds on taxes and charges,” ACCC chair, Rod Sims, said. “Loyalty scheme operators must ensure they comply with the Australian Consumer Law, including by avoiding statements that are incorrect or likely to create a false impression, and avoiding unfair contract terms.

“Loyalty schemes also need to review the way they explain to customers how their schemes work, and how they notify their consumers of any reductions to the benefits offered."

Submissions on the draft report were welcomed until 3 October, with 22 submissions received. The majority were generally supportive of the draft recommendations. However, there were some concerns around strengthening of the privacy act. There were also concerns from providers around whether consumers understand opting out of data collection and marketing messaging will significantly impact loyalty program offerings and personalisation capabilities.

In its submission, American Express supported the first and third recommendation, and generally supported recommendation two, stating the ACCC had rightly called out the collection and use of consumer data raises important considerations beyond mere privacy and go to fundamental questions of fairness and value exchange.

"We agree with the ACCC’s assessment that the proposed prohibition on ‘unfair trading practices’ requires careful consideration and further consultation," the statement read.

Regarding strengthening the privacy act and law, American Express added a note of caution: "Any review of Australia’s Privacy Laws, however, needs to be carefully considered and ensure an appropriate balance is struck between protecting consumers from actual harm while not curtailing innovation or development in the fields of data science and analytics."

AMEX also noteed the ACCC identified instances of unease on the part of consumers in relation to how their data has been processed by data holders. "But the draft report does not appear to identify any instances of actual harm or detriment in relation to data processing by loyalty schemes. We think such unease can be addressed with improved transparency and education but would query the need for more substantive change in respect of loyalty schemes specifically."

Deloitte is all for broader reform of Australia’s privacy regime. The consulting giant noted reform of Australia’s privacy regulatory regime as proposed by recommendation four of the Draft Report, including stronger provisions for notification, consent and individual rights, would more closely align Australian law with international regulations, and promote globally compliant practices among local organisations and customer loyalty schemes.

“The adoption of proposed changes to Australia’s privacy regulatory regime… presents an opportunity for organisations including those which offer customer loyalty schemes to meaningfully align their practices with global privacy standards that consumers are increasingly expecting. Deloitte’s Australian privacy practice welcomes proposed reforms that will increase transparency, promote privacy, and foster trust between consumers and customer loyalty schemes," the submission stated.

Finder welcomed any change making it easier for consumers to understand and compare offers. One particular element the comparison site said it would like to see communicated better is the relative value of spending loyalty scheme points in different ways. This is regularly misunderstood by Australian consumers who choose to use their points in circumstances that offer less value.

“We are also strong supporters of the Consumer Data Right (CDR) regime being introduced in Australia. CDR will empower Australians to take control of their personal data and will equip them with the information they need to make better decisions across their finances," the Finder statement read.

Finder also supports changes to the Privacy Act providing consumers with more control, but also letting them leverage the power of their data, saying this will lead to a more competitive market.

Qantas stated in its submission that contrary to the Draft Report, the collection and analysis of consumer data is not the ‘key objective’ of the Qantas Frequent Flyer Program.

The ASX-listed airline also said customer loyalty schemes are very different from digital platforms, as participation in a loyalty scheme is voluntary. It is also well-understood by members that marketing products and services to members is one of the primary purposes of loyalty schemes, and at any time, members can also choose to cease their membership.

“Qantas has some concerns about the Commission’s recommendations for broader legislative change. In particular, where these recommendations seek to extend the Commission’s views and perceptions from one industry (as highlighted in the Digital Platforms Inquiry Report) to loyalty schemes and the broader Australian economy. Any such sweeping legislative change requires extensive review and consultation by the Australian Government, to ensure that any laws enacted are necessary to meet the identified need or the deficiency," the response stated.

Virgin Velocity noted members expect interactions with the program to be digital, seamless and personalised. So to remain successful and competitive, Velocity needs to meet these expectations, which requires collecting and using data to create these experiences.

“It is no longer an option for a loyalty program, or arguably any consumer-facing business, to refrain from collecting and using data to create a personalised and frictionless experience for its customers," the loyalty program's submission read.

“Velocity appreciates that, in line with the findings of the Digital Platforms Inquiry, the ACCC considers that law reform is required to better deal with the use of data and consumers’ expectations about that use. Velocity considers it is in the interests of both consumers and businesses that regulators make it clear when businesses are compliant with the existing legal framework, while establishing clear regulatory parameters going forward.’

Woolworths has concerns around law changes

Woolworths does not support the ACCC’s specific recommendations unfair contract terms be prohibited (not just voidable) and a concept of 'unfair trading practices' be introduced and prohibited (recommendation two). This is because it is not currently underpinned by substantive evidence which demonstrates it would be effective or necessary.

Woolworths said it considered this recommendation premature and that the CAANZ process must include an evidence-based review prior to any consultation, noting the current regulatory framework and environment comprehensively protect consumers against 'unfair' contracts and trading practices.

“Together they empower the ACCC to effectively and efficiently address any use of unfair terms or trading practices by reference to long standing, well tested and well understood concepts including 'unconscionable', 'misleading' and 'deceptive' conduct, and 'false representations'.

“At a time when the Federal Government is trying to ensure efficient and effective regulatory measures are in place, the introduction of an entirely novel and additional concept of 'unfairness' would introduce unnecessary uncertainty in circumstances where the existing, robust regime is fit for purpose," Woolworths stated.

Woolworths is also concerned Draft Recommendation four proposes a fundamental change to Australian privacy law, by extending the requirement for consent to every circumstance in which a consumer’s personal information is collected, used or disclosed (with limited exceptions).

The grocery store giant noted the recommendation in the DPI that personal information necessary for the performance of a consumer contract should be excluded from the general obligation to obtain consent.

“Woolworths is concerned that reasonable minds may differ as to what personal information is ‘necessary’ for an agreement and would welcome additional consultation and clarification. Further, Woolworths considers that where businesses use personal information in accordance with legitimate interests, this should be excluded from the general requirement for consent," the statement continued.

Woolworths said it was also concerned this recommendation has the potential to require significant resourcing, as previously noted by the OAIC, and that a careful balancing of the rights of individuals to privacy and the right of business to use data has to be undertaken.

Finally, flybuys is concerned in ensuring the ACCC’s recommendations on certain complex issues do not operate in a disproportionate manner or produce unintended consequences.

For example, the company expressed concerned with the impact providing granular and widespread opt-outs, or specific opt-in requirements for particular data practices such as programmatic advertising, might have on the ability of a loyalty program to offer a valuable service to members.

“Flybuys acknowledges the importance of heightened control mechanisms and transparency around the use of personal information at a consumer level. However, this needs to be balanced against the value that loyalty programs derive from this information and the consequential impacts that would ultimately flow through to consumers from an erosion of this value," the submission read.

“It is important to recognise that many loyalty programs like flybuys are at their core, marketing programs, and in the case of flybuys, consumers making the decision to join are fully aware of this, and are aware that they will be kept informed of their options in respect of earning and redeeming points. As the ACCC will appreciate, if loyalty programs were to offer greater or lesser value to members based on the extent of opt-ins or opt-outs that have been selected by members, this would work against having a single clear and transparent program that is capable of being easily understood.

Flybuys added the implications of opt-in or opt-out requirements are not fully understood, and imposing changes in these areas could significantly affect the customer value proposition across loyalty schemes in ways that have not been investigated.

“It is also important that recommendations in respect of granular and widespread optouts, or specific opt-in requirements, are capable, in reality, of being implemented at a technical level, or without significant intrusion to customers through a multiplicity of communications seeking approvals," the statement read.

The ACCC is expected to release its final findings at the end of this year.