​How Krispy Kreme revitalised its brand in a saturated market

Business focused on the love of the brand, rather than driving sales 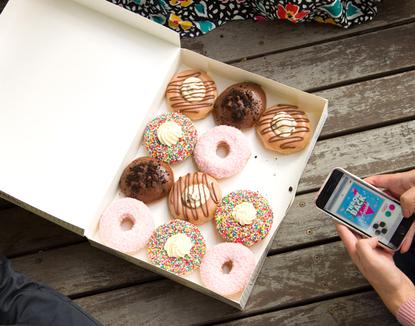 Sixteen years ago, Krispy Kreme launched in Australia, and it’s fair to say there were doughnuts everywhere. Aussies couldn’t get enough – until they did.

The iconic doughnut manufacturer saturated the Australian market, opening 80 stores, and rode the fad for too long. Stores started closing and it became clear Krispy Kreme needed a better business model and to streamline and innovate its distribution, sales and marketing.

Now, the business is focused on the love of the brand, rather than driving sales, concentrates on digital marketing and innovation, and has just had a raging success with an Instagram campaign centred on nostalgia.

Krispy Kreme Australia chief marketing officer, Russell Schulman, chatted with CMO on the history of the brand, and how it hopes to evolve into the future. And it's work that saw him recognised in the 2019 edition of the CMO50.

“It’s been an interest journey since we launched in Australia 16 years ago. It felt like we rode the fad for too long and we needed a better business model,” he told CMO. “So in 2011 we partnered with 7-Eleven to do distribution, as well as our retail stores, and we focused on creating an experience in our retail businesses.

“Then around five years ago, ecommerce started taking off and we added food delivery. We also found the more we did digitally to innovate, the better it did as a brand."

With an audience that no longer watches TV or reads newspapers, the company concentrated on digital, which was also a better fit for lower budgets. The arrival of a new global CEO helped the business focus on the love of the brand, doubling down on activities to optimise brand engagement.

“Our new goal was not to be the biggest, but to be the most loved,” Schulman said. “Now, we are dedicated to tapping into trends and bringing them to the mainstream.”

Nostalgia was noted as a key trend a while back, and has become rich marketing territory for Krispy Kreme.

“People have memories of the first time they had a Krispy Kreme, but we needed a new audience because that was 16 years ago,” Schulman said.

The old and the new

Krispy Kreme had a clear challenge: Connect with millennials in an interactive and fun way, and get them excited about the new Throwback Party doughnut range on a tight budget. To solve this, Krispy Kreme turned its Instagram into a virtual arcade celebrating its Throwback Party doughnut range consisting of Fairy Bread, Choc Brownie Batter, Cookie Dough and Finger Bun.

Four of the Instagram Story highlights on the Krispy Kreme Instagram account linked to a mini game to celebrate a new flavour, each inspired by a classic 1990s video game. A leaderboard tracked the high scores of players, with top players on the leaderboard winning a supply of Krispy Kreme doughnuts. The campaign showcased the new range in a way that evoked happy memories of Australians childhood and instilled a sense of nostalgia through a digitally-led idea.

The campaign was a huge success and ultimately drove sales for the brand, even though it was not the aim of the campaign. Results included a 24.8 point lift in ad recall; 32.8 per cent increase in unique users onsite; 30 per cent year-on-year (YoY) growth in ecommerce sales; a 6.3 per cent YoY growth in retail location sales; and a 103.6 per cent increase in average weekly Facebook engagement during the period.

“Instagram is going incredibly well for us. While we have permission to be a bit wacky, it’s hard to get direct ROI on those, so we are very happy," Schulman said. “The objective was not to drive sales, it was about brand love. We deliberately made it simple to use, engaging, with the nostalgia of arcade games.”

And Krispy Kreme isn’t afraid to innovate; in fact innovation drives the brand love, while its traditional glazed drives the sales.

It has previously released ‘lickable’ ads, a 3D VR doughnut movie, and has tapped into movie goers with a range of popcorn and cola fizz flavoured units.

“We find when we combine great flavour ideas and a great concept, in an easy to use format, that’s the trilogy of gold for us,” Schulman explained.

In terms of measurement, the company does a deep dive on Net Promoter Score (NPS) every six months, and is continually monitoring its digital channels. It also uses geo-targeting around certain stores, and segments around events, rather than flavour.

“We’ve done a lot of testing and geo-targeting and we do see an uplift at certain stores we target with digital engagement. This is great for brand building and driving people into stories,” he continued. “For example, we’ll do a post around UberEats on a rainy Friday night around certain stores, and then measure the uplift.”

Food delivery is now a growing part of the Krispy Kreme business, while ecommerce is big around planned occasions. Schulman pointed out gifting is very popular, and Valentine’s Day is the brand's biggest day of the year.

“We see triple the transaction value in people buying online than in stores, which is definitely people buying for occasions," he continued. “Our wedding towers and doughnut walls are going really well right now. We recently did a morning meeting pack, so we do that kind of targeting and simple tweaks to offer a personalisation feel.”

Original glaze is still the number one seller, although people do want to try new flavours. Wwe do have to balance logistics in terms of new flavours, as we bake fresh daily and because what people say they want, and how they act, is different,” Schulman commented.

In the future, Krispy Kreme hopes to expand upon its data strategy and partnerships, as well as opening flagship stores where consumers can see the doughnuts being made.

“We want to lean into customisation so customers can make their own doughnut mid next year, and expand upon partnerships like the one we did with the Golden Gaytime doughnut released recently,” he said. “Krispy Kreme was one of the first brands to cut a hole in the wall to show how the doughnuts are made, so we’ll be opening up landmark stores so people can watch this.”

From a digital perspective, one key lesson learnt is to simplify it as much as possible. “When we offer a promo to the customer, there’s no mandatory filling in of a form. We reward customers upfront, and find we get rewarded afterwards because we didn’t try to trick them, so we have their trust," Schulman said.

Supporting this is Bronto for email marketing, and Magento for ecommerce and the local website.

“Moving forward, we are working on making data more holistic and bring 7/11 customers into our digital ecosystem, as most transactions occur there rather than at our stores. We want to reward consumers for that,” Schulman added.