CMO interview: How this Australian comparisons site is building brand consideration with consumers 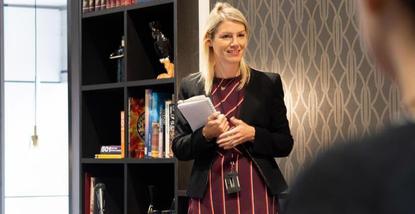 Machine learning trials to better serve up content and product navigation, building a single customer view, and lifting brand consideration across channels are just some of the steps Canstar’s marketing chief is taking to drive growth.

Group executive of digital and marketing, Sara Tweedly, has been with Canstar since 2013, initially as part of a team of two at the research and ratings powerhouse. Fast forward six years and she’s now sitting in a joint marketing and digital leadership role across a team of nearly 40. In the last three years, the business has also doubled headcount.

The investments are all part of repositioning the Canstar business from primarily B2B to a B2C offering. Starting life as a research and ratings agency primarily in the banking space, Canstar became well-known for its five-star product and brand ratings across financial services products, giving the companies it rated the opportunity to licence and use its stars on marketing collateral.

“Over time, our prompted brand awareness grew quite strongly. So six years ago, senior management recognised increasing numbers of consumers were coming to our digital properties to find things out for themselves,” Tweedly tells CMO. “We’d never really developed as a B2C brand, and digital assets weren’t set up for that – it was all to support B2B. So about four years ago, when we relaunched the current site, we really started going in the B2C space.

“We’re now very much a dual-sided marketplace, serving both B2B and consumers. We have always been consumer-first, but our real focus is now on consumers coming to the site to find out what might be the best home loan, superfund or credit card for example.”

Tweedly started her career in the UK with the former Halifax Bank, which merged with the Bank of Scotland in 2001. There for seven years, she worked in marketing, ecommerce and products. She then relocated to Australia, working for Adelaide-based, quasi-government statutory authority, HomeStart in direct marketing. From there, she moved to Brisbane and worked for professional services firm, Trilby Misso, heading up digital marketing before switching to Canstar in 2013.

“When I first joined Canstar, we were starting to focus on becoming a consumer-facing comparison site, so it was about building that out and ensuring we had functionality to support that goal,” Tweedly says of her early work. “There was also a lot of work driving traffic, so building out our content strategy was an important to that.”

“We’d recognised prompted brand awareness is high and like many, we’d wanted our unprompted awareness to be much higher,” Tweedly says. “To make that happen, we had to start telling the Canstar story and for consumers to understand we’re not just research and ratings company. Yes, it’s a core part of what we do, but we’re also a comparison site that compares products across a whole suite of categories.”

That meant telling the story in channels where consumers were engaging. This led to Canstar’s TV debut, and it’s executed six campaigns since then featuring celebrities such as The Block host, Shelley Craft and I’m a Celebrity’s Dr Chris Brown. Canstar also started investing in digital advertising, particularly in paid search, something Tweedly says it’s significantly increased investment in as it became more commercially viable.

“As a comparison site in the financial space, we do something quite different. We are Australia’s biggest financial services site by the fact we have more comparable brands on the site. And we want consumers to know that. We’re different in that we do show just about everything in the market – for example, we have 100 home loan lenders on there and 4000 products.”

The differentiator for Canstar remains its star ratings, a key part of comparison navigation tailored to segment-based value considerations.

“For example, in health insurance, as a young male versus an elderly female, you’ll see a different star rating as different things are going to be more important to each,” Tweedly explains. “Similarly, you could get a 5-star product that’s more expensive but fully featured, and another less featured but more cost effective. In our tables, they’re sorted by the star rating, which is quite different.

“That’s why in going to market, they’re key messages we’re getting across.”

With so many more comparison sites in the market, there was arguably heightened need to differentiate. However, Tweedly says the rise of competitors has helped build the comparison category as a whole.

“Particularly in current climate and back of the Royal Commission, consumers are generally more engaged,” she comments. “Even since the GFC, people have taken a more active interest in financial services products. We want to make sure we’re on the consideration set when they turn to comparison sites.”

There’s also industry category growth to explore. Alongside Canstar, the finance comparison site, the company runs Canstar Blue, a consumer comparison site looking at products outside of finance, from gym membership to energy and Internet plans.

Across all efforts, Tweedly is working hard to balance short- and long-term goals, something she acknowledges is a balancing act for marketing leaders today.

“The important thing when I am talking to the executive team and board is making sure people are aware of what those metrics are and what we should be watching,” she says of her marketing mix. “It’s also about measuring expectations. We know it takes time to build a brand.

“We look not just at unprompted awareness, but customer commentary and sentiment, plus looking at searches for branded terms and so on. It’s forming a holistic view of brand, not just sticking to one metric.”

It’s clear the change Tweedly has navigated at Canstar has been transformational. Key has been constantly re-evaluating her role as a leader, as well as rethinking the recruitment process.

“Making sure you have the right team around you is so important – the right team with the right skills. As the team scales, you can’t do everything,” Tweedly says. Also growing in importance are softer skills around attitudes, resilience and a willingness to change.

“So many of us are dealing with uncertainties, and you need to recruit people with those [softer] skills and an appetite for building on their skills,” Tweedly says. “Internally, you have to make sure you’re really focused on the right things. And you have to delegate. That’s the first part. But you need to delegate the right things in the right amount so you’re really focused on what’s driving the business. That can be hard, particularly as you’re scaling and used to doing everything yourself. Taking a step back can be a pain point for CMOs on that journey.”

The third thing in Tweedly’s book of change management is ensuring the organisation is aligned to one set of goals. “That said, you also need a supportive and inclusive culture so if something isn’t working, or you have an idea, you feel confident and safe to have that conversation with people,” she says.

“Canstar has done a really good job of that. The fact we’ve evolved over 27 years shows we embrace change.”

Other pluses include long tenure across the executive team, a 50/50 gender balance and diversity, and commitment to the customer, Tweedly says. And as Canstar scaled up, more processes have been put in place.

“Over my tenure, we’ve implemented tools to either help with marketing, digital product or content management,” Tweedly adds. Investments include moving fully into the cloud and migrating to Amazon Web Services, and implementing Atlassian’s Trello and Confluence tools to help manage workflows.

“We also have regular training and inductions. I have a full team meeting once a month, then my leaders do weekly WIPs and it’s all working back to our common goals and org strategy,” Tweedly says.

As for priorities, the big one for Tweedly is customer insights. Alongside regular usability testing and focus group consumer testing, Canstar uses feedback tools and is monitoring social channels to tune into customer thinking.

“We’re looking at how people use the sites – what stories they click on, how long are they spending, what they are searching for. This gives us great insight into where the consumers’ mindset is,” she says.

The next step is building out a single view of customer, work which sees Tweedly’s team collaborating closely with Canstar’s technology crew.

“We just had a record number of visitors to the site of 2 million across both sites, so all that customer data around what they’re doing on the site is there. We have data consumers are also putting intent-rich data into the site, along with product data,” she points out. “To move from that disparate to single customer view really opens up being able to personalise and provide a much better experience for the customer. It’s part of my team’s priority list in the next 12 months.”

Ultimately, the aim is ensuring consumers come back and find what they’re looking for, Tweedly says.

“The other way we can do that is by deepening the product offering. We have some trials with machine learning going on right now in that space and big data initiatives to facilitate that,” she says.

“There is a lot of regulatory change – whether you look at superfunds or the energy market. There’s so much opportunity for us to simplify this complexity for consumers. We’re trying to distill that down to something consumers can understand and use.”

Meanwhile, in terms of marketing strategy, Tweedly says Canstar is evolving its channel mix. Up until this year, TV and PPC were predominant channels. “We’re now exploring video, social opportunities, and we’re doing more in existing channels while looking at new ways to execute,” she says.

“Then from a digital products perspective, we have almost gone back to basics, focusing on the core. Part of the challenge is there so much on our site – 35+ categories on Canstar and more than 100 on Canstar Blue. We’ve really focused on a few verticals, making sure they’re as usable as possible.

“It’s where content comes into play. We didn’t have any involvement in the Royal Commission, but off the back of that as well as other environmental factors, plus rate changes and Open Banking, people are more engaged. There’s an opportunity for the category to be more involved.  Understanding what it is they’re looking for, what channels they’re looking to consume through is key for us.”

Through this, Tweedly says being open to fresh thinking, resilience and a growth mindset is vital. The second thing she believes all CMOs need to focus on is team culture and diversity of thought and skills.

“Understanding you can’t do everything and you do have to trust your team is key,” she says. “Some technical skillsets are constantly changing – just in SEO there are new things every week. You have to make sure you have that in the team. And it’s important to get that communication piece right.”