Marketing leaders from Kraft Heinz, Sport Australia and Forever New share the ways they're striving for creativity both in terms of culture as well as creative execution 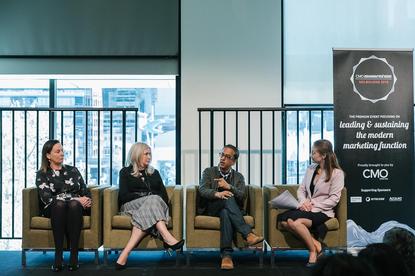 The onslaught of technology and automation, performance-driven digital advertising and data-led marketing decision making are raising considerable questions about how to ensure creativity continues to flourish in the marketing function.

Yet while there is definite agreement the industry must do more to strike a healthier balance between the science and the art of modern marketing, a panel of CMOs at the first annual CMO Momentum Melbourne conference last week see digital and data capability equally helping them achieve more creative campaigns and cultures.

Kraft Heinz CMO, Shalabh Atray linked creativity to the purpose of marketing, which is to create great brands that stand the test of time. He noted Nike and Unilever as examples of enduring brands.

To achieve this, brands must do three things really well, Atray said. Firstly, they understand consumers better than anyone else.

“That’s logic, and where data is becoming more and more important. Secondly, and something which has been true for the last 100 years and will be for the next 100 years, is irrespective of data, and that’s magic,” he told attendees. “Because you can have great data, but if you don’t also have great stories that make people feel something, you haven’t got magic. Data gives you knowledge and allows you build on it. Then you need emotion.

“The third thing is purpose. People like brands that stand for something bigger than themselves. We live in a world of digital and data, which are incredibly important, but emotion and making people feel something is equally key. We’re all human and we must appeal to people’s hearts.”

“If you think about what creativity is, it’s generating ideas that solve problems. Without data, how can you know what you’re solving for? That data is fuelling our creativity,” she said.

Belan cited three pieces within the marketing arsenal particularly key to driving creativity: Access to customer data, the fact no one knows our brand like a marketer does, and the fact marketers are used to driving commercial outcomes. In this context, Belan noted the fashion retailer’s focus on experiences.

“One would be a data insight we had that showed despite online growth, there are still people who want to try before they buy. But they’re short on time,” she explained. “Using this, we developed a new function online called ‘reserve in-store’, where customers have ability to reserve an item in store, then come in quickly during a lunch break, pick it up and try it on. It’s an example of how we’ve used data points and creative thinking to develop to build an experience that enhances the customer’s experience.”

Over at Sport Australia, chief of marketing and insights, Louise Eyres, admitted creativity and government aren’t two things you’d often put together. “But the reason why the Federal Government set up Sport Australia is that we have to have creativity to drive behaviour change. We’re here as an adjunct of department of health to get Australians moving,” she explained.

To achieve this, Sport Australia is tapping partnerships, creative thinking and every platform at its disposal to overcome the country’s inertia around being active. “As a tax payer funded organisation, we don’t have the resources to tackle such a whole project without that creativity,” Eyres said.

One unique thing element in the mix is the AIS site in Canberra, a 65-acre space previously seen as a campus facility. That’s until marketing came to the party.

“There are 500,000 people going to the AIS every year – school kids, athletes, pre-elite athletes. So we asked: How do we use that connection point? We’re looking at every place and space to tell our story, so every person that comes, or every child that visits and hops back on the bus, leaves with a Sport Australia narrative,” she said. “That’s about how we utilise those touch points in front of us creatively.”

Yet Atray agreed the dominance of digital and data within the modern marketing context makes him “a little anxious” at times.

“With such data at your fingertips, it makes you feel comfortable you have evidence behind something,” he commented. “Evidence can be great when you’re looking at the short term, but it can be risky when you’re thinking long-term.

While data can helpfully inform marketing therefore, it’s also vital for marketers to recognise they still have to take risks.

“Data doesn’t give you all the inspiration; it gives you information. We need to be able to distinguish the two,” Atray said.

In this vein, Eyres saw data helping her team be far more focused on where creativity is needed. An example would be driving participation in sport. She pointed out it’s only really via data that Sport Australia saw the tip-off point of teenage girls between 13 and 16 years old, stopping sport.

“We have these initiatives in place to deal with that, and it’s because data is telling us it’s a big issue,” she said. “Why are girls stopping organised sport? There are lots of reasons. Through data, we can pinpoint these and then get creative.

“So data is enhancing our ability to be far more precise with our investment, then enhancing our creativity to meet that challenge.”

Co-creation, both with the customer and partner, is another vital piece, CMOs agreed. In Kraft Heinz’s case, working to visualise the identity of its Fountain brand with one big retail buyer, for example, helped drive advocacy in the category and build growth. Eyres, meanwhile, said co-creation across the diverse group of skills sitting in her function – from an insights team running Sport Australia’s OzPlay survey, to digital strategy, government relations, media, communications and marketing – has a key role to play in building both creativity as a culture and creative campaigning.

“You can end up with silos with all those different skills in the mix. While we’re certainly not Agile, we’ve been bringing in a few digital practices to help the creative process,” she said. For example, a monthly showcase presented by the partnerships team led insights sand digital teams to realise new product and development opportunities, giving sponsorship ways to commercial other assets.

Up next: how these CMOs are balancing creative-led versus performance marketing

Yet evidence has been stacking up that creativity in the advertising and media sphere at least, appears to be declining.

A 2016 study authored by Peter Field for the IPA and WARC found the number of short-term campaigns had quadrupled to 30 per cent, while budget investment behind creativity (as measured by extra share of voice) fell by around 12 percentage points. The knock-on impact was that brand fame effects declined for the first time and the efficiency multiplier fell from 12 in 2010 to around six in 2014.

In other words, long-term, fully-funded campaigns were as effective as ever but there were fewer of them getting made. Which raises the question: Why is it still so hard to get those creative campaigns across the line and get buy-in?

“I think CMOs have to do a much better job of presenting evidence to show long-term brand building,” Atray said in response. “When you hear some of the best professors in this country talk about it, they have the best evidence we need those creative media and campaigns. It’s like there’s two streams running: There’s academia, and the industry, and the two aren’t coming together.

“There is tonnes of evidence showing if you invest in long-term, and create a healthy athlete let’s say, versus one on steroids, it’s more sustainable. We do get so caught up in the short term that we don’t have the time or advocacy of data for the long term.”

For Atray, talking through great examples of brands globally achieving this, is paramount. “We need to take time, go to our boards and educate them about it. We need to talk to them about how a Nike or Coca-Cola is built. And there has to be a balance of short term and long term. It’s not one or the other,” he said.

In selling the vision for Sport Australia’s recent big ‘Move It’ launch nationally, Eyres said one ways she gained permission to do things differently was out-of-category expertise.

“There’s this ability and permission as marketers, when you come in to a different industry or sector, to not take on the norms or pre-existing myths of that category,” she said. “We were also fortunate the Government had articulated a 2030 Sport and Physical activity strategy. We were coming in with that and launched the new brand and program off the back of this 12-year vision and government policy.

“To that short and long-term approach, we have been able to tackle everything from under Sport 2030, and use that as air cover for the transformation.”

A further way Sport Australia is balancing short and long-term is by working with state governments. “We can take that long-term view build brand and position and what we hope to be the next ‘Quit’ or ‘Sun Smart’ initiative, to change the nation. The states then, through short-term activities and programs, are our partners,” Eyres said.

As a final way of getting buy-in, Eyres noted her team’s ability to sell in behaviour change.

“We have a target to get 210,000 Australian every year to achieve physical activity guidelines in order to achieve our over-arching ambitions. So we can talk about it in very quantifiable behaviour change metrics, and hold ourselves to account,” she said.

“That resonated more in driving the change and getting investment and licence, than potentially doing something more in the language of campaigns or brand. With our board, made up of Olympians and investment bankers, you have to sell in with a language that will resonate with them.”

Belan saw sophistication of performance marketing in terms of targeting and measurement as key to their dominance and agreed it was difficult to sell in a broader and more strategic brand approach.

“In retail, we’re often looking at trading numbers by the day, even by the hour. So you want to show what you’re doing is effective. But I’m also a proponent of brand health and development. I struggle to find the balance,” she said.

As Belan works on a pitch for Forever New to launch a brand-led program of work in the US, she’ll be investing in pre- and post- research to ensure the numbers back her up. This will include current level of awareness of brand relative to competitors, as well as consideration, attributes and so on.

“And make sure you do the same benchmark study after a campaign to see if you have moved anything. That will help with numbers to show the value of investment,” she said.

One thing Atray has learnt over time is to be very clear in the beginning of the goal. He advocated spending time in the beginning with senior people in the business around what expectations are and verifying if you’re aiming for share gain or behaviour change.

The example he pointed to is Kraft Heinz’s well-established brand, Gravox, which has 82 per cent market share in Australia.

“However, gravy is used mostly only for the roast on a weekend. That’s a dying use case,” Atray said. “We have a beautiful campaign on air right now showing Gravox as hot sauce, not just gravy, and using it among different things.

“I told the business this is about behaviour change. So you have to believe that attribute I’ll measure is Gravox being used for different types of meals. But changing the behaviour of someone who is 65 years old and using Gravox forever isn’t going to happen with one campaign. You have to give it one, two years because it takes time to change behaviour.

“We have to have the foresight and knowledge to wait for that change to expand the category.”