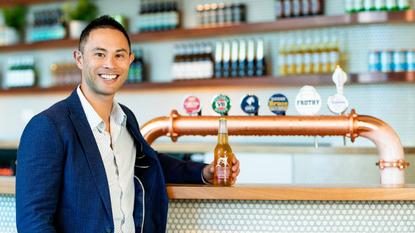 Carlton & United Breweries has promoted contemporary brand director, Brian Phan, to VP of marketing as its current leader takes up a regional role.

The CPG giant confirmed Alexander Lambrecht will leave the Australian business next month to take up VP of marketing for AB InBev’s Indian and South-East Asian businesses. He’s only been in the local role for nine months, and previously spent 14 years with AB InBev holding various marketing and brand roles in the US, China and Belgium.

In his stead comes Phan, who joined CUB’s marketing leadership team four years ago from Ford Australia, where he spent more than 12 years in marketing and communications. Upon joining CUB, Phan was head of cider and alcoholic beverages, then oversaw brand for premium and craft beers, before being appointed brand director of the contemporary portfolio about 18 months ago.

“VP marketing is one of the most important roles in our business and there is no-one more suited to fill it than Brian,” said CUB CEO, Peter Filipovic. “He has been critical in driving Great Northern’s growth to new heights and was behind the world-first launch of Corona Ligera, which is now Australia’s number one international mid-strength beer. In addition, he was instrumental in turning around CUB’s performance in the cider category via Pure Blonde Cider and Mercury Hard.”

Phan commences the new role from 1 October and reports directly to Reid. In a statement, he said the job was a “dream come true”.

“Whether it’s VB, Great northern, the Carlton family or any one of CUB’s other fantastic brands, these are icons of Australian culture,” he said. “Consumers love the romance of these brands, their history and the fact that some of the most memorable moments of their lives have been enjoyed with one of our drinks in their hands. I really think this is the best marketing job in Australia.”

Filipovic also thanked Lamrecht for his contribution, highlighting his efforts around positioning Carlton Zero as a low-sugar, non-alcoholic beer option, as well as his wider inspirational style and commitment.

The Lambrecht’s appointment followed the promotion of former VP marketing for Asia Pacific South, Richard Oppy, to a global VP of global brands.