How to facilitate a change in behaviour to fuel creativity 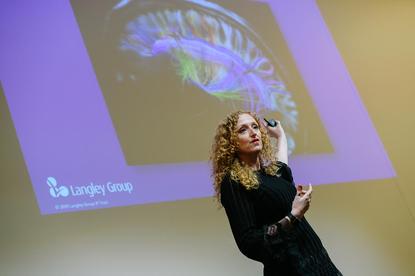 Positive emotions, like love and connection, facilitate change in human behaviour and should be top of mind for marketers looking to fuel their creativity.

That's the view of CEO and founder of the Langley Group, Sue Langley, who took to the stage at CMO’s Sydney Momentum event last week to discuss the neuroscience behind human behaviour.

As she explained in a very basic sense, the human brain is made up of three simple sections: The reptilian brain, the limbic system and the prefrontal cortex. This ‘triune’ brain all has a role in decision making and facilitating change.

In order to make changes or strategic choices or fuel creativity, the prefrontal cortex needs to be engaged. But as this part of the brain requires a lot of fuel to operate, it tends to get bypassed.

"The limbic system does not make a choice about good or bad habits, it just repeats them. The limbic system is the survival instinct - it’s fight or flight - and doesn’t require much fuel."

In contrast, the prefrontal cortex is the thinking and strategising brain, and higher order function. Unlike the limbic system, it requires a lot of effort and fuel. When the brain is low on fuel, your ability to pay attention, make effective decisions and be creative diminishes. Dopamine is the number one fuel this part of the brain needs.

“To change a habit, you need to engage this part of the brain," Langley continued. "But every time we see change, humans see it as a threat. The limbic system immediately has a reaction - the first reaction is an emotional one, where something is seen as a threat. It takes the brain a little while to change because it requires self-regulation and engaging the prefrontal cortex.

“So, in order to change, our brain needs to be fuelled up with dopamine."

A key way to achieve is by facilitating positive emotions. "As marketers, we need to find a way to increase the level of positive emotions people are experiencing, to make them receptive to change,” Langley said.

Langley went on to explain negative emotions and threat responses tend to be faster, stronger and longer because they are of survival value; adrenaline goes up, and dopamine goes down in these situations. Low dopamine means people can’t think clearly, strategically, or creatively.

Positive emotions are slower and shorter reposes, however, dopamine goes up and this is what fuels the brain.

“For change to occur we need dopamine, so if you want to build change and creativity, think about what you can do to look after the brain. Positive emotion creates change,” Langley added.