Winning over the Next Generation in the 4th Industrial Age 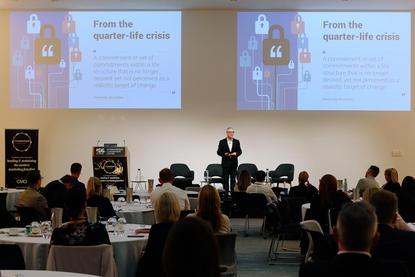 The confluence of demographic change associated with millennials and digital technology will have profound impact in the world of business and beyond, says renowned futurologist and director of the Centre for Industry 4.0, Rocky Scopelliti.

Speaking at the third-annual CMO Momentum conference in Sydney, Scopelliti detailed these changes by firstly defining ‘youthquake’, a term entered in the Oxford dictionary as the 2017 word of the year.

“'Youthquake' is a word that describes a ‘profound social, cultural and economic shift associated with the young generation. And in 2017 it was associated with millennials,” he told attendees.

The second word related to the coming revolution is ‘juvenescence’, which, according to Scopelliti, is defined as the constant state of youthfulness. “I’ve applied this word to describe what kinds of leadership and organisations are going to survive in the Fourth Industrial revolution,” he said.

For Scopelliti, juvenescence is set to replace transformation as the way organisations will thrive in the coming economy. Because it's the leadership principle that’s going to be required to steer organisations through the disruption presented by the Fourth Industrial Revolution.

“The word transformation is one we’re all familiar with and been involved with in our careers. It's reached its useful life because it applies to an end state and is often associated with a significant one-off event,” Scopelliti claimed. “What the data shows is  survival is no longer a function of a once-off event. In fact, we’re regressing back to Darwinian theory - evidence is starting to show those who survive are those who adapt.”

Scopelliti released his new book, Youthquake 4.0 – A Whole Generation and The New Industrial Revolution in order to set out the profound changes coming to our lives in the Fourth Industrial Revolution. However, the term 'Youthquake' itself is not new, first coming into the lexicon in 1965 to describe the significant shift occurring in the 1960s. This social change occurred worldwide, disrupting the social fabric.

Five generations later, it's millennials who are setting the agenda, Scopelliti said, noting the composition of Millennials in the workforce is increasing.

For example, Scopelliti pointed out millennials have an unquenchable thirst for entrepreneurship, and are choosing to back themselves rather than work for an organisation that does not fit with their purpose.

Alongside the societal shift, data and algorithms are experiencing exponential rather than linear growth and will rule the way of doing business and economics in the coming new industrial age, Scopelliti continued.

“The Fourth Industrial Revolution is here and it’s going to hit you whether you like it or not. It will be terrestrial. Those are the words of Klaus Schwab chairman of the World Economic Forum,” he said.

Key here is the traversing of boundaries on a whole range of scientific and technological worlds that will change the way we think about competitive advantage from the current set of lenses around whether we are differentiated or not.

In contrast, the coming age of the experience economy will turn conventional business models and thinking on its head, said the futurist.

This shift away from the linear view to a circular one will require an organisation to adapt to a world of accelerated change, Scopelliti said. A company's approach to data will be at the core of this, along with critical skills like rapid ideation and thinking differently.

“This data will sit in platforms that will scale exponentially, allowing you to hit variability, this new economic physics, where the marginal cost of acquisitional supply is virtually zero,” Scopelliti predicted.

The challenge is how to increase our ability to adapt to a world of accelerated change of this new age. For Scopelliti, marketing has a key role to play.

“It’s about the symbiosis of demographic change, associated with the millennial demographic, and the capacity of leaders to adopt juvenescence, the constant state of adoption, the constant state of youthfulness," he said.
“The responsibility you have as marketers to be the advocates of change, the navigators of change, has never been more important.”

Read more of our coverage from CMO Momentum 2019: