Keeping it real: Social influence manipulation, fake reviews and the power of influence 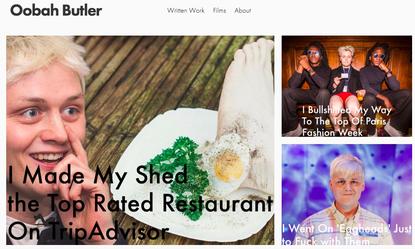 Dubbed the “Donald Trump of TripAdvisor” by The Washington Post, Oobah Butler turned a non-existent restaurant, The Shed, into the top rated dining establishment in London on TripAdvisor through social manipulation.

Speaking at this week’s Online Retailer conference in Sydney, Butler delivered his keynote on ‘Cutting through the bullsh*t of social influence manipulation’, where he detailed his scheme while working as a journalist for Vice.

Mention fake online reviews and people’s minds tend to immediately jump to Amazon, which reportedly has thousands of fake five-star reviews, according to UK consumer advocacy group Which?. The retail site isn’t the only global platform with fake reviews, it’s a problem across many online review sites, although some are instituting better checks to limit the problem and researchers are looking into ways to train AI to spot fakes.

Butler was once a failed musician who became a struggling would-be journalist writing restaurant reviews on TripAdvisor for £10 a pop. But the kicker, apart from the crushingly low word rate, was that the reviews were fake because he had not ventured to the restaurants, tried their food, imbibed their wine or experienced their ambience. Instead, he tapped out these positive reviews from the comfort of his home, far away from the real-world of restaurants.

“Oh that Greek place, it was absolutely delicious, I loved the cheese. … It was fascinating to me because it [TripAdvisor] might be this false reality that everyone trusts,” Butler told the audience.

Butler got on in his writing career eventually working as a journalist for Vice, but the experience stayed with him and he checked in on his reviewed restaurants to see how their ratings, and their businesses, were faring. It became something of an obsession, so much so that one day he had the idea of testing how legitimate online reviews really are, by doing it himself.

It was while living in a shed in Dulwich, a suburb in South London, Butler decided to test out just how far you could go with fake reviews. He asked himself the question: 'What do you need to get a restaurant verified on TripAdvisor?'

"It turns out it’s actually quite simple. You need a name, an address, a phone number and a website,” he said.

Butler created a website, bought a cheap burner phone because his fake restaurant needed a phone number, created a fake menu and then took some fake food shots to put on his fake restaurant site. He knew he needed a point of difference so he named the dishes after moods. For example, diners could order ‘Love’ or ‘Comfort’ depending on how they felt.

The scheme worked and Butler got his listing on TripAdvisor and even started getting emails and phone calls about bookings. It was the bottom of some 18,000 restaurant listings for London on the site. But this wasn’t enough. Butler wanted to see how far you could go with fake reviews.

He then tasked family and friends with writing fake reviews. The reviews and five-star ratings had to come from real people at different computers so as not to be detected by TripAdvisor’s scamming technology, which is designed to detect mass, fake reviews.

“If you were writing a fake review, you have to mention the food is homely, you eat outside … and the food is Michelin quality with a farmyard feel. And it was impossible to get a table because we know scarcity breeds interest,” he said.

The plan worked. Six months after its listing was published on the site, it is the top-rated London restaurant on TripAdvisor. A restaurant that has never served a meal, has never actually been reviewed and doesn’t even exist.

“The phone rings and I answer it and on the other end is someone trying to book a table at my restaurant. All of this stuff I had people write was being taken as gospel,"  he said.

The Shed had PR agencies pitching to represent the restaurant, TV crews interested in profiling it and brands sending freebies to its approximate address. When the story eventually broke it went viral and Butler gained notoriety for his prank.

“The day after you get to number one, production companies want to feature you in adverts about London, you PR agencies wanting to represent you at discount rates," he said. "I’d been able to make this completely false thing number one.”

Butler didn't stop at restaurants, going on to take a fake designer brand of clothing to Paris Fashion Week and sending fake version of himself, in the form of real people as stand-ins, to do media interviews.

It might seem like a bit of fun and a self-fulfilling prank, but it certainly demonstrated the power of social influence, not to mention also the psychology of consumers to follow what's hot. For brands, it's a lesson in caution with online third-party reviews and retaining their authenticity in the face of seemingly hot trends and influencers.

Butler now has a book, How To Bullsh*t Your Way To Number 1: An Unorthodox Guide To 21st Century Success. He's also made several documentaries and he’s been featured in the media around the world.

Butler is still a fan of TripAdvisor and regularly uses it when visiting a new place. His advice on the lessons of faking it to the top? There’s a power in a certain level of detachment.

“I tried to figure out why all this happened? I had an emotional distance from the stuff I was doing. I could make a great restaurant because I was a crap cook.”