Virtual reality promises deeper, immersive experiences, it just need to have the right data to make the most of it. CMO takes a look at the consumer and business applications driving take-up 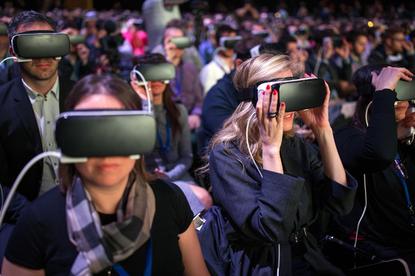 Virtual reality (VR) has been in the market for around five years and, while it’s made an impact, we’re yet to see  mass adoption on the consumer side. But on the business side, it’s maturing as companies embrace the possibilities of the immersive experience.

“Where it was once gimmicky in the early days, that’s changing … We’re seeing companies treat it far more seriously as a channel to communicate to their markets,” co-founder and CEO, Start VR, Kain Tietzel told CMO. "It’s an inevitable technology."

Tietzel points to the saying that there's two types of people: "Those who believe that VR and immersive technology will change the world, and those who haven’t tried it yet”.

He's not alone. Several in the industry see profound opportunities for brands to build trust with their customers through the sensory, deep experience of VR.

“Authenticity is really important. Many people distrust big brands, seeing them as just there for profit, but VR can demystify that and create a deeper connection with that brand and that product by immersing them in that experience that helps them feel more connected with the brand,” CEO, Aurora VR and Revolution Shopper Marketing, Jason Bentley, explained to CMO.

VR can be split into two different camps - there’s the consumer side, with applications broadly focused around entertainment and applications for retail, experiential and advertising; then there’s enterprise, focused around training, marketing and communication.

The enterprise side has different requirements and different constraints, which shape the style and pace of VR adoption, with considerations such as ROI, efficiencies and other business criteria. On the other hand, the consumer side has to answer questions around price, compatibility and accessibility.

The marketing opportunities, on the consumer side, are available through creating experience in-situ such as shopping centres or stores, and extending the engagement from experiential to relationship-building.

“VR can be used as a means to engage audiences, give them something deeper than they might experience through any other medium. It’s a way to attract people, get them into the experience and through onboarding. Then there are re-marketing opportunities through that,” Tietzel said.

Given the opportunities VR presents for creating immersive, interactive experiences, travel is an obvious candidate. Qantas, for example, was an early adopter of VR, using the technology to showcase the travel experiences on offer in Australia. It aimed to hook people by letting them take a virtual experience and then incorporated a booking link.

An alternative to a VR experience that takes place in a particular location is brands creating their own VR app and making it available in device app stores.

"This type of VR allows people to interact directly meaning “consumers can download and experience the content themselves at their own leisure,” continued Tietzel.

Tourism New Zealand is a good case study here. The team created a Pure 360 VR campaign with Aurora VR to showcase several locations in the land of the long white cloud.

Whatever the scenario VR pops up in, it's firstly important to have an understanding of the why you're taking up VR before embarking on .

By way of example, Bentley noted a recent fusion of augmented reality (AR) and VR for Target from its catalogue so customers could engage with the products and in their own environments.

“You can build Google Analytics into it to understand engagement, time, products interacted with and any product purchased. There will be many opportunities around VR commerce to come,” Bentley advised.

A wider use case is across universities, which are adopting VR as part of their recruitment strategies. This allows education providers to show their wares to prospective students, including where the university is located to show it’s safe and accessible, particularly for international students who aren’t likely to be familiar with Australian universities. The University of Technology Sydney, for instance, has used VR as a marketing tool to show the campus is safe and accessible and have published its app into various Chinese app stores.

VR is also useful to provide a virtual tour of other types of facilities. "You can answer questions and if a parent asks about science facilities, you can take people there virtually to take a look,” Tiezel said.

VR arcades are another initiative where people book in and can use a whole range of different VR platforms to delve into lots of different settings and experience. It’s used by some universities and other places, according to Bentley.

“The key thing with that is you can deliver higher end experience in that environment, sensory experiences - like being attached to an apparatus like you’re really flying or you’re under water with a VR headset on and you’re swimming with whales. They’re more dynamic, more advanced experiences,” Bentley said.

Up next: How businesses are transforming training, collaboration, health and safety and more via VR

Then there are businesses seeing the possibilities of developing training using VR. Here, the possibilities are almost endless because it can be used to deliver training in any range of environments and for any type of applications.

Virtual classrooms where participants attend from anywhere in the world are starting to be developed, while training for operations in dangerous settings such as mines or oil rigs can be delivered using VR. It's an environment that is realistic but safe, meaning any mistakes or missteps don’t result in loss of life or damage to sensitive and expensive equipment.

Likewise, specialised medical training, which is typically expensive, time consuming and complicated to execute, can benefit from being delivered through VR. It can dramatically reduce the complexity and speed involved. Training surgeons and doctors can be improved by allowing them to practice virtually and learn from mistakes in a safe, but realistic environment.

Osso VR trains both medical practitioners as well as sales staff in healthcare in the US using Facebook’s Oculus Quest platform. Karuna Labs in the US is using the VR technology to treat chronic pain using its system called ‘Virtual Embodiment Training’ that retrains how the brain responds to pain through neuroplasticity to rewire perceptions and responses to pain.

“Over time, this learning process slowly returns the neurons to normal and pain diminishes. Karuna’s software uses virtual reality to create neuroplastic changes by placing the patient in an environment where they increase movement while blocking pain signals," said physical therapist, Karuna, Kris Beebe in a company blog.

"The brain ties movement with different experiences and not to pain. This process is key to changing the perception of pain and the movement associated with it as non-threatening.”

In addition, VR presents a way to onboard new staff into an organisation, for processes and workplace regulations, but to help immerse them into the organisation’s culture. It’s an opportunity to more quickly help new staff feel a part of the organisation and also understand how the company relates to its customers, particularly when they’re in the public.

Facebook has developed an enterprise business around its Oculus VR platform, which the social media giant bought in 2014 for US$3 billion. At a recent Sydney conference showcasing its enterprise social media platform, Workplace, it also showed off its VR business.

The platform has been used by a range of businesses as varied as healthcare, logistics and food production.

As part of its Workplace showcase, Facebook showed how its VR platform has been used by logistics and shipping business, DHL, to visualise its packing and shipping stations. There were also a number of training examples, such as Johnson & Johnson Institute, which is training surgeons more efficiently via VR. A third  is Farmers Insurance, which is using VR to train insurance claims staff to provide better customer service, while a fourth is ExonMobile, which trains staff using VR while keeping them safe and potentially save lives.

“At DHL, we ship around 5 million shipments a week and to do that we have to build unit load devices and this is where VR is invaluable," SVP, group certified initiative and global head of CIS, DHL Express, Rick Jackson said in a video." We can send people into an immersive world and they can be safe and they can go through the process of building the unit load device."

Everything is a screen

Those like Tietzel, who work in VR everyday, see a time when we won’t talk about the technology by which we access something as separate to the platform.

“ We will have different shared spaces and the way we interact with these technologies will be seamless," he predicted. "We won’t think about how we access, it’ll just be overlayed into our lives or something we delve into. We’ll be able to access multiple environments and multiple streams of information in a way that we don’t appreciate right now.”

Ultimately, we may be heading towards the ultimate paradox whereby computing, which started out on a screen, will become immersive and ubiquitous. We do away with the need for screens in and of themselves, yet paradoxically everything around us may convey information the way a screen does. There will be no more screens, but screens will be everywhere.

“I may be watching TV, but I may also have my stock information projected onto it or the window that I look out to my garden may have information about my plant needing water or information about gardening specials from Bunnings right now," Tietzel added.  "These will be additional pieces of information that won’t require us to focus on doing one specific thing because we will not have screens anymore, this is the end of screens."