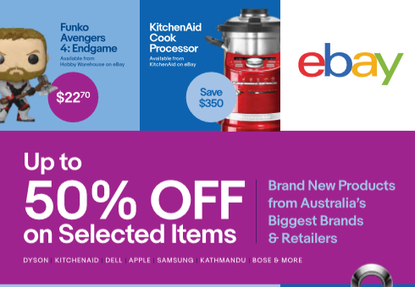 eBay Australia has embraced an omnichannel approach to reaching its buyers by launching its first Australian paper catalogue. There will also be a digital shoppable version of the catalogue online from next week.

This following the news in June last year when eBay Plus, it’s loyalty program, was launched.

From the latest tech to men’s and women’s fashion, heating, bedding, kitchen and cleaning, appliances, liquor, glassware, toys and gaming, entertainment, backyard and garage - eBay is using a physical paper catalogue to showcase its 40,000 Australian retailers, demonstrating 90 per cent of what’s on eBay is brand new.

Julie Nestor, CMO of eBay Australia, said eBay is adopting a similar strategy many traditional bricks and mortar retailers have - by having both a physical and online presence.

“'We wanted to find a way to showcase our fantastic range of products. We know retail catalogues have long been the way Aussie shoppers prefer to browse and purchase the best deals.

“We're really excited about bringing together the online shopping and physical worlds.”

eBay’s winter catalogue is being distributed to two million Australian households from tomorrow via walkers into letterboxes. The sale event and digital version of the catalogue will be live from 21 May.

Nestor spoke to CMO last year and said getting the customer loyalty program right was just one of the ways eBay is attempting to shift organisational focus from a product-led proposition to customer-centric.

According to Nestor, ‘loyalty’ efforts previously focused on cross-sell and upsell, rather than how to achieve customer stickiness.

She also planned to invest heavily in brand building, with a fresh brand-led campaign last year emphasising some of the core customer-led capabilities of what the marketplace delivers.

“You have to get away from that constant onslaught of retail promotions, discounts and coupons and start driving a more valuable buyer experience from the product you have,” she said.