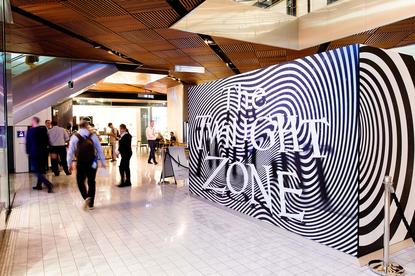 Ever wanted to enter the Twilight Zone for real?

Network 10 gave Sydney residents a chance to experience a little of what the fictional realm might be like through an experiential installation at Westfield Sydney in late April, in support of the launch of a new The Twilight Zone series on its '10 All Access' service.

Working with the experiential agency Urban, 10 outfitted an area within the shopping centre to create an ‘infinity room’. Visitors were shown the trailer for the new series in an anteroom before entering a larger room which featured lighting and tricks of perspective to give the impression of an infinite space, accompanies by The Twilight Zones’ iconic theme music. The installation was inspired by one created for the series’ US launch on CBS All Access at The Grove mall in Los Angeles early in April.

“We took CBS’ idea and turned it into this beautiful, light infinity room, that reflects the suspension of time and space, to make it look like a Twilight Zone mind bending experience,” says Network 10’s head of marketing Brad Garbutt.

“What we really wanted to do was give people an Instagrammer’s dream, and give them something where they can go in and take an amazing photo and walk away with an experience that they can put on their Instagram and tell people how great the Twilight Zone is.”

The installation is the latest in a series of experiential marketing activities undertaken by Network 10.

“We generally reserve a bit of our budget for getting out and about and bringing Channel 10 and 10 All Access shows into the real world,” Garbutt says. “That is exactly what we set out to do with this, to give people the Twilight Zone experience in the real world, and not just passing it by on a bus stop or a billboard.”

Earlier this year Network 10 created an activation for I’m a Celebrity Get Me Out of Here which featured ice cream with edible crickets and bugs.

“We gave that out across Sydney Brisbane and Melbourne on the day of launch,” Garbutt says. “We also did some stuff for Dancing with the Stars when it launched, with mirror ball cars running around Sydney and Melbourne. Also in the city in George Street we had an interactive panel that we did with JC Decaux where you pressed a button and one of our judges, Tristan MacManus, would teach you how to cha-cha.”

While Garbutt says the effectiveness of experiential campaigns is difficult to measure, there is a great benefit in getting out and talking to people about shows.

“It’s something I think 10 does very differently to a lot of other people that are spending a lot of money in marketing,” Garbutt says. “We do the big campaigns where we like to blast out.  But we do like to be a little bit different. We are the under 50s network and we are trying to stand out from our competitors by doing things little bit out of the ordinary.”

Last year Network 10 collaborated with Vivid Sydney to create an animated cake that climbed the side of a building in support of that year’s season of Masterchef Australia.

“That took six months for us to bring to life,” Garbutt says. “Some things are bit more short-term, and you can do things quite quickly with experiential agencies. But the good ones are the long-term ones that are planned and thought through. We have bene working on the Twilight Zone one for a while.”

The new Twilight Zone series is the third revival of the concept first developed by Rod Serling and aired on American television in 1959. It premiered on CBS All Access on April 1 this year and will consist of ten episodes of varying length. Four episodes are already available on 10 All Access, with more to be added each following Friday.