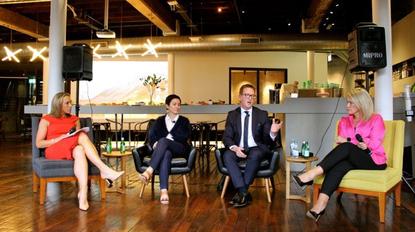 Speaking on a panel organised by Zenith to mark this year’s global International Women’s Day (IWD), Luxottica’s VP of marketing, Milena Cavicchioli, Nine chief sales officer, Michael Stephenson, and SBS director of marketing, Jane Palfreyman, shared how their respective organisations are tackling the question of gender balance. They also debated the many reasons why it’s still an issue without a clear resolution.

All three agreed cultural change is vital in order to get to the right mindset for gender equality. Palfreyman, for example, saw societal discussions leading to all the right moves, the right rhetoric and policies, but said these were arguably the “easy” things to do.

“The hardest change is the cultural change, which won’t happen overnight. Culture is that intangible convention, and until we better understand what are the barriers women are facing in terms of progressing, we’re won’t fully solve the problem,” she said.

“There is a lot of talk around quotas and policy initiatives, but I think it comes back to the problems we need to solve that these steps alone, won’t achieve. By and large, most of the people running organisations today are generation X or baby boomer men. It’s not in itself a problem, but when they grew up, social norms were different and women’s roles were different. Naturally, unconscious bias builds in.

“It’s about how we be really purposeful how we overcome that. It’s the next leap we need to focus on.”

Cavicchioli agreed plans must be in place to monitor, measure and bring accountability to the discussion. “On the other hand, if there isn’t also the expectation there, then there’s a problem,” she said.

“Let’s be honest, not every company recognises they need to work on gender equality… it’s not easy or a simple process either. We should have more people - women and men - being more deliberate about obtaining this goal.”

For Cavicchioli, one of the big hurdles is what she called ‘the Matrix’ existing in society. This has resulted in embedded frameworks, iconography and behaviours most of us don’t even recognise are there. One such example outside of gender discussion is the outdated yet pervading belief that we all must sit at our desks in our office for eight hours a day, five days a week, in order to get our jobs done, she said.

“If there is gender imbalance today then yes there’s that the woman is asked to do more or car more, but not the only reason,” Cavicchioli continued. “There’s also this ‘Matrix’, or cultural construction around us, that convinces us that’s our role.”

Just look at most corporate PowerPoint presentations: The future is commonly visualised as a single man on top of a mountain, Cavicchioli said. “That’s one of those constructions that’s nothing to do with family. It’s this iconography that tells you’re subliminally that you’re not part of that,” she explained.

“When it comes to the future, the vision, being empowered – that’s the man at the top. I can think of so many other examples in communications. Once you pay attention, you understand we still have so many examples where women are not even there. But that’s just one of the possible worlds.

“If we decide it’s not the only world we live in, we’ll break the Matrix.”

When asked if this is also being reflected in the advertising brands put forward today, Cavicchioli said she believed fashion brands such as those owned by Luxottica are on the whole good at reflecting both men and women.

“The question is arguably more about standards of beauty rather than gender balance being represented,” she said. “With brands like Ray-Ban and Oakley, I think we do a good job. The bigger problem is internal imagery and concepts and how we support these perhaps unconsciously.”

Whether it’s gender equality or initiatives of inclusiveness, Nine chief sales officer, Michael Stephenson saw two areas being vital to success: The plan, and the execution of the plan.

“Most things that fail are not because the intent isn’t there, but because the execution was poor,” he claimed. “Often it’s because we’ve tried to move too quickly from A-Z. These things don’t happen overnight, they happen on the margin, through small incremental changes happening regularly so you get a continuous cycle of improvement.

“These changes, whether they’re cultural norms or way we think about equality, diversity, inclusion and so on, are not for one month or one year, it’s for forever. If you’re doing something that’s forever, it needs to be built on great foundations and you need to move slowly, on the margin, and consistently over time now.”

Palfreyman saw these foundations as what organisations stand for, how behaviours link back to values and how you do business.

“It has to be deliberate - it has to be discussed and driven at a board and executive level, and all organisational divisions need to be involved, too,” she said. “You need to identify these barriers, and you won’t hear that from executives or people leader, it’s getting that feedback from the ground up. This doesn’t happen by accident.

“At SBS, we do a lot on culture and it’s in the executive discussions monthly. That’s the only way to consistently flex the muscle until it becomes business as usual.”

In this vein, Cavicchioli pointed to one organisation’s hiring process that insists every executive position open have both male and female candidates proposed.

“You can decide not to and present two men or women, but then you need to explain why. That exercise alone makes you think. Every time, that becomes a conscious decision, that you have reflected upon,” she said.  “I find that very helpful.”

At Nine, the business is setting an expectation from the top on how it should act, speak, feel, and engage, Stephenson said. “The big thing we’ve done as I see it is giving people permission to operate in their own world – for me, giving flexibility is really important.”

Stephenson noted a number of initiatives at Nine to close the gender gap, including a learning program specifically focused on women and emerging leaders to foster empowerment and confidence. Nine also has a mentoring system 27 female staff have participated in, and a ‘Women of influence’  awards program.  The ‘Through her lens’ program also sees its CEO, Hugh Marks, speaking to women around the business gathering stories around leadership and passion.

Over at SBS, a purpose-driven organisation focused social cohesion and celebrating diversity has led to a prominent diversity and inclusion strategy and five employee action groups, one of which focuses on gender equality (‘The Network’).

These are very active with a  large remit to overcome barriers existing in the organisation and run things like talks, change and programs for the business, she said. This group was also active in overhauling SBS’s parental leave policy to take gender out of the equation.

“That’s anchored in their KPIs and there is an expectations, it’s not just a nice to do… It’s more about challenging stereotypes,” Palfreyman said. “I do also think we need to de-stigmatise the man stepping up in the home.”

In terms of measuring success, Palfreyman noted SBS now has 50 per cent women on board, as well as its executive team. “We’ve got the numbers. For me, it’s about the narrative and how we change stereotypes,” she said.

While agreeing cultural change takes time, Cavicchioli admitted she’s “not a patient person” and sees gender imbalance as a sign of injustice. She was in favour of quotas for situations where it’s difficult to change.

“You may have a situation with very bad habits, and you need to force someone’s hand to get to a meaningful level of decency. But it’s not enough,” she said. “Go back to policies, and this discipline of paying attention to the Matrix. Look at what iconography of language, or habits we have that are an inheritance and are so embedded we don’t pay attention anymore.”

For Stephenson, regulation and policies used to force change are not a sustainable solution for create change as more meaningful. He argued it was time to “let common sense rules apply”.

“Don’t make it too hard, but normal. If you give someone an injection of confidence, then don’t everything if sposition if people are confident,” he added.