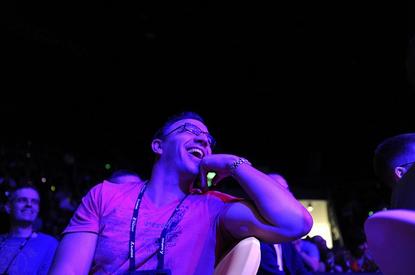 At first glance, comedy and the road toll may seem like an odd pairing.

But through an innovative partnership with the Melbourne International Comedy Festival, the Victorian Government’s Transport Accident Commission (TAC) is delivering a message that might actually save lives.

According to TAC senior manager for engagement, Megan Jacobs, the TAC’s sponsor ship aligns closely with the Safer People pillar of its core Towards Zero campaign. With 615 shows and more than 7500 performances staged mostly in inner Melbourne, Jacbos says the Comedy Festival can prove to be a highly-distracting environment for people as they make their way to and from performances. She also adds Victoria witnessed 37 pedestrian deaths in 2018.

“What the Comedy Festival offers us is a lot of pedestrians that are in a high-risk area, where you really have to be alert,” Jacobs says. “It gives us a vehicle to reach a lot of people in a very congested space where a lot of those accidents are happening.”

Jacobs says the TAC is also aware of the need to use its sponsorship in a way that complements Festival-goers experience, rather than interrupting it. Hence the TAC employs street teams to deliver its message, including performers dressed as LED crossing men and women, and giveaways of merchandise and free show passes.

“It is getting to people in way that is not telling them off,” Jacobs says. “It is having fun with people. It is having installations at the venues that are around making sure you are staying safe on the streets. So we are not hindering their experience, just tapping into them on the journey.”

“It’s not really about exposing the TAC or Towards Zero brand,” Jacobs says. “It is really about picking those events and opportunities where we can very clearly deliver the message so we are having behavioural change and making people think.”

Now in its 33rd year, the Melbourne International Comedy Festival will run from 27 March to 21 April. Executive director, Damien Hodgkinson, says the partnership with the TAC reflects the Festival’s shift away from sponsorships based on brand and ticketing and activation, towards putting the brand in people’s hands.

“What we strive for and what we have are relationships with people who share our vision and share our values, and they are looking to use humour and engage with a large audience,” Hodgkinson says.

Last year, the Festival’s box office exceeded $17 million for the first time, and this Hodgkinson year expects to sell more than half a million tickets. Its audience includes a strong representation in the 18-40 demographic.

Speaking after the Business of Events conference in Melbourne in early February, Hodgkinson said one of his key challenges is keeping the content fresh and exciting for audiences. To achieve this the Comedy Festival invests significant resources in nurturing young comedic talent through programs such as Class Clowns, Raw Comedy and Deadly Funny, while also working to expose these new acts to audiences. This year will also see greater representation from artists from South East Asia and India, including shows in Cantonese.

With so many acts to promote on a limited budget, Hodgkinson says the Comedy Festival works extensively to engage audiences through social media, while many established artists promote younger talent through their own shows.

“Every household name and every Australian comedian that you know at some point in the early stages of their career had engagement with our development programs,” Hodgkinson says. “We constantly through the year providing those opportunities or providing those platforms.”

Hodgkinson says this bolsters the Festival’s offering to consumers at a time when it faces increasing competition from other entertainment opportunities.

“There is something about sitting in a room watching a live performance on stage that you just can’t match on Netflix or on television, and audiences love that,” Hodkinson says.

As a result, sponsorships like those with the TAC enable brands to engage with consumers at a time when the Comedy Festival is changing the mood of the city of Melbourne.

“It’s capturing the inherent value of laughter, and how humour and a positive outlook and laughter has positive health benefits and improves people’s mental outlook and their perspective on the world,” Hodgkinson says. “We are not just an event - we are an event that is focused around people having a good time. And I think that the is key to the partnerships.”